Piss and the fire in your belly - a memoir of sorts 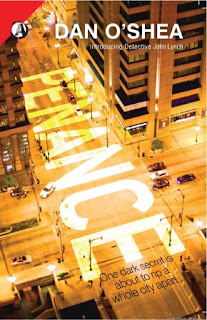 My debut novel, PENANCE, is the first story I ever finished. Not the way it’s supposed to work, I know. I’m supposed to have some amateurish piece of crap stuffed in a drawer somewhere, maybe a couple of them, the training-wheels novels on which I cut my teeth, sharpened my craft, paid my dues. I don’t. Fact is, at this point I’ve written three novels and sold all three of them. Sold another one I haven’t written yet. Written 20 or so short stories and sold all of them, too – except for a couple I’ve donated to charity anthologies.

If that sounds like bragging, let me clarify. That drawer my crappy novel is supposed to be stuffed in? I’ve got other shit in there – like a couple of wasted decades.

I’ve dreamed of being a writer since I was a kid. I’ve always had the imagination for it and I had a flair for the mechanics of stringing words together, the editorial side of it. It was that flair, maybe, that got me off track.

I married young, had kids, had to earn a living. Stringing words together was the only marketable skill I had. So I got some editorial flunky jobs – started out as a proofreader in the bowels of a major accounting firm. The proofreader’s charge was clear. We were supposed to fix the mistakes – the misspellings, and any clear abuses of grammar. That was it.

But so much of the writing was just ugly. Sentences were wordy and unclear. Transitions between ideas were awkward where they existed at all. Evident opportunities to invest the copy with a little style, sometimes even a little wit, were missed at every turn.
So I started fixing that stuff, too. Good thing. Because, as anyone who has read my blog with an eye for detail can attest, I’m not a very good proofreader. Pretty good at the grammar stuff, but I’m a horrible speller. And this was back before spell check.

I’d only been on the job a couple months when the big boss called me in – the guy who was a couple levels above my supervisor. Seems she was tired of my missing the mistakes I was supposed to catch and really tired of my trying to fix things that I was supposed to leave alone. Seems she was looking to get my ass canned, so she copied a mess of the stuff I’d marked up and passed it up the chain of command. The big boss told me I sucked as a proofreader, but that I was actually a pretty good editor. Said he either had to fire me or promote me. He promoted me.

Which lead to a long career in financial copy, first as an editor, then as a writer. Turned out to be a profitable little niche. Once you get a track record for being able to translate crap like the tax code into English, you can charge a pretty penny. So I did.

Bingo. I was a writer and making a pretty good living at it. I just wasn’t the writer I’d dreamed of being. Nobody dreams of writing about the tax code.

You know all the excuses. The job takes time. The kids take time. Everything takes time. And, for a long stretch, I was freelancing. Seemed like the smart choice after I got some experience in and found out what the freelancers in my niche were making. A novelist? Seriously? Be a grownup, I’d tell myself. You really gonna spend time writing make-believe on spec when you could spend it chasing real work?

That’s the kindest thing I told myself. Behind that, though, was a lack of faith, was the idea that being a novelist was beyond me. The idea that kids dream about a lot of things. They dream they’re going to be Bart Starr or Ernie Banks too, but they grow up, recognize their limitations and get on with the business of being adults.

So I pissed on my own dreams. Pissed on them long enough to damn near put the fire out entirely.

Then people started dying. You get to be my age, that happens. My best friend, my aunt, my dad. And it hit me that I could just keep paying the bills and marking squares off the calendar until the squares ran out or I could actually take a shot at this novelist thing.

Also, I learned I’d already sort of written that stuff-it-in-a-drawer novel. See, while PENANCE may be the first novel I finished, it wasn’t the first novel I’d started. I’d written bits and pieces of shit over the years, had these fits and starts where I’d swear this time I was serious and I’d plug away for a week or two. A couple fragments from those efforts are in PENANCE somewhere. And I’d been writing PENANCE all along in my head, toying with the same characters, the same ideas.

In fact, at one point back in my mid-thirties, I had about 30,000 words in the can. Liked most of them, thought I was getting somewhere. Then I did something stupid. See, I had no idea how long a novel was supposed to be, and this was back in the pre-internet days, back before you could Google that shit. I’m sure there was a book at the library where I could have looked it up, but I got the itch to know late at night, so I grabbed a book off the shelf, figured I ought to be able to work this out easily enough. I counted up the average number of words in a handful of different lines, multiplied that by the number of lines on the page, multiplied that by the number of pages in the book. The number I came up with was 300,000 words.

Maybe I was only counting full lines and not allowing for all the fractions of lines – the dialog, the ends of paragraphs, whatever. Maybe I grabbed a Stephen King novel. Maybe my math just sucked. I dunno. But the idea that a novel was 300,000 words got stuck in my head and opened a yawning pit of despair. Those 30,000 words I liked were only a tenth of a novel? I’d never finish one. Never. I hardly wrote fiction at all after that, not for years.

It was such an obvious mistake, so clearly wrong. For chrissake, I’d written books. Not fiction, granted, but a manual on oil and gas taxation, a guide to doing business in the European Economic Union, a manual for boards of directors of not-for-profit corporations, a handbook for family business owners. I knew – or I should have known – that the 300,000 number was complete bullshit. But I chose to believe it. Why I can’t say. Maybe I needed a new excuse to justify not chasing my dreams.

Anyway, people started dying, I had my little epiphany, Google had been invented, and I found out that 70,000 to 100,000 was the real finish line. Only took a year after that for the first novel. Took about three months for the second. I wrote the first draft of my thirds in 34 days. (If it makes you feel better, I’ve spent more time cleaning up the second novel than it took to write the first draft, but that’s another story.)

The point of all this? I’m publishing my debut novel at the age of 53. I don’t have any more talent now than I had when I was 20. Sure, I’ve been writing professionally for a pile of years now, I learned shit doing that, I’ve got a training base laid down. And yeah, if I’d actually cranked out a full novel at 20 or 25, it probably would have been an amateurish piece of crap. But the next one would have been better. And I sure as hell could have written something publishable by 30 or so.

Gotta wonder sometimes what would be different if I had. Doesn’t matter, though. I didn’t.

Writing advice is all the rage. I’m suspicious of it, personally. I find the process to be highly personal and esoteric. What works for you is what works for you and that’s all you have to know.

But there is this. You have to actually write. And you can’t let anyone piss on your dreams.

Especially yourself.
Posted by DanO at 10:23 AM

And what a debut it is.

Can't wait to see this finds it's audience.

I guess I'm lucky in many ways. I wrote the first draft of Old Gold by accident. I'd always been telling myself i would write books, but that I'd write them when I was ready, and when I had some life experience.

Then I went through a marriage break up, and also had a half baked idea for a film script, but I've never been an outliner so I figured I'd write a short story as an outline for the script.

Then the short story started to run long and I figured out I was writing a novel. And with that I realised both that you're never going to be "ready" to write your first book, but that you're also "ready" every time you sit your ass in the chair.