Does This Crime Fiction Make Me Look Homicidal?

A new study just released claims that so-called "chick lit" is bad for self-esteem. This study has nothing to say, as far as I can tell, about whether the genre is bad for your soul, but that's another matter.

"The negative effects produced from the current study underscore the concern of previous scholars for the potential effect of chick lit protagonists' obsession with weight and appearance," write Kaminski and co-author Robert Magee in the study, "Does this book make me look fat?". "Scholars and health officials should be concerned about the effect novels have on women's body image, especially since these issues could lead to disordered eating and other health issues." 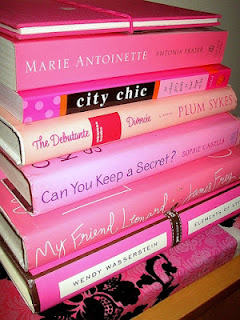 In reading the stories on the study (you can get a copy of the scientific article itself for a low $39.95 (roughly two Euros according to today's exchange rate (God bless America))) the claim seems to be that the focus on body weight in these novels is harmful. Ya think?

Here's a piece by friend of the blog Alison Flood on the matter.

We could, and perhaps have, argue about "chick lit" and whether the term alone is simply a pejorative and misogynistic attack attempting to reinforce the patriarchy of belles lettres.

Chick lit sells, even though (perhaps because) the covers aren't tres literary.

So millions of people, men and women, are enjoying this genre. Or sub-genre. Or marketing label. Whatevs.

The underlying question is whether studies that determine a certain type of reading is bad for you are good for you.

Imagine what they'd find if they get hold of Ray Banks or Neil Smith or Christa Faust.

I think the answer to you last question is that they would find the worlds best combined Willeford collection.