Your New Year's Resolutions Are Stupid

So I'm in the Emily Couric center in Charlottesville having some stuff done to me by nice people and I see this here sculpture: 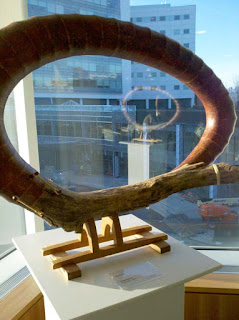 That's called "Resolution" by Kurt Steger. I am very stupid and don't get art, so that looks like a circle of wood to me.

I mean, honestly, I don't get why people need to line up to see the Mona Lisa on a wall when it's already in a billion art books. You think the colors are different in person? You think it's less blurry looking? I don't get it.

And photography as art? Um, point and click. Done. Oh, look. It's in black and white. Artsy.

So, anyhoo, the circle of wood is called "Resolution." I can dig that, at least. Because most of the resolutions people make are circles. You say on Jan. 1 that you're going to lose 50 pounds and then by May you're back throwing down chicken wings at Laverne's Wild Wings so that the following Jan. 1 you plan to lose 65 pounds. Or whatevs. Maybe that's not you. I don't know you. How did you get here?

I'm beginning to think they took too much blood from me today. Shit. Is 1.6 liters much blood? It seems like much blood. But then they replaced it with something called "LifeASyn," which they say is some sort of synthetic replacement they're trying out in what sounded like some sort of guinea pig beta test thing. I dunno, to be honest with you. But when I call up my insurance company and tell them I need $45,000 coverage for my "LifeASyn," I'm probably going to need to spell it out for them. Someone in branding should have thought of that.

New Year's Resolutions are dumb, is what I was getting at.

Look, I'm not sure why people wait until Jan. 1 to do something they want to do. If I want a taco, I go get a taco. If I want to catch up on emails, I go to the can. I don't wait. If you want to be a better writer, do it now. If you decide in November that you want to get down 1,000 a day, don't wait two months.

We all do dumb things to get done the things we need to do. We bargain with ourselves. Maybe with God. With the clock. With our future selves.

I'm going to bed now, even though I need to write. I'm tired. I write better when I'm awake. Vibrant. So I'll go to bed now and get up early and write. Sure, that always works. Tomorrow Me will be awesome.

Next year, I'll be a better person. I won't write on my notebooks. I'll do my homework before I watch TV. I'll do the dishes before I go to bed. I'll spend more time with orphans. I'll stop making fun of my Aunt Tess's skin graft. I'll donate to charity. I'll respond to every email the very month I get it. Whatevs.

We do crazy, stupid things. Things that don't have clean edges. Last year, I NaNoWriMo'ed and it was crazy.I failed miserably. I said I was going to do it because, damn it, I wanted to have the thing done. And if you want to have the thing done, you need to do it. See, many of us would love to be able to play the oboe, but we can't. Why? Because we don't want to practice the oboe. Also, some people maybe don't know what an oboe is. I mean, I know, of course. Why don't you just tell me what you think it is and I'll tell you if you're right, k?

As Mr. Robert Smith says, "So I trick myself. Like everybody else." He was referring to sinking, it seems. But I'm talking about resolutions and the games we play.

Seriously, 1.6 liters. That's like one of those jugs of Coke, right? Shit. Did I say that already?

Yeah. So, we all make resolutions and play games and, while your resolution is stupid and a sure path for failure, who cares? Fail. You fail. I'll fail. We all fail for ice cream.

If NaNoWriMo gets you writing, does it matter if it sounds whackadoodle?

If a resolution motivates you, whuppie-damn-ding-dong.

Or finding pictures of crappy writers with best-sellers out and taping those pictures to your laptop with a note that says "They can do it. Why can't you, putz?"

Or a writing group. Or an MFA program.

Or repeating "Every day in every way I'm getting better and better."

Only, and here's what I think is important, don't beat yourself up over it. You have many tools in your writer's toolbox. Sure, many of them have to do with pacing and character and STORY ARC and all, but save some room for motivators. And when one stops working, you have to go to another one.

Motivation is tough, especially if you're not writing on some sort of deadline. Which is why self-imposed deadlines such as NaNoWriMo are so popular.

But making a Year's resolution just seems stupid. Make a resolution for this month or for this week. Or for the next three days. Starting Friday, spend an extra half-hour writing. A three-day resolution. Then you can make another one.

Tom Stoppard would line up a half-dozen cigarettes on the window sill and write for however long that took. He wouldn't write for X hours or X words. He'd write for X smokes. And that worked for him.

New Year's Resolutions and NaNoWrimo are suggestions, not rules. My suggestion is to look for little resolutions, little motivators.

I don't know. It sounds like a trick. But, then again, writing is tricky. If it were easy, they'd call it photography.

That's a joke, folks. Photography is great. Especially for people who can't paint.

Now, I'm going to go have a bit of a lie-down and see whether this LifeASyn self-replicating factor is able to put any oxygen into my brain. G'night.
Posted by Steve Weddle at 3:00 AM