Brian was born with a heart defect.  He had open heart surgery at the age 1 for the first time; in total, he had three surgeries as a child.

As a result, he didn't play a lot of conventional sports.  But he did bowl on a league.

We've recently taking up bowling.  For me, it's something I'd only done a few times since moving here.  For Brian, it's a return to a sport he enjoyed as a kid.  He knows a lot more about it than I do.  And his average is a lot higher than mine.

Sunday mornings, we get up early and head to a neighboring town, where they have games for $1.50 per person per game from 9 to noon.  It's a great deal.  It's a great family activity.  It's especially reasonable, since we have our own shoes.  We've been doing this for a few months now.

Last week, I had a sinus infection and laryngitis, and wasn't able to go, so I was looking forward to getting back there this weekend.  Just Brian and I were going, and we'll bowl the solid three hours and eat breakfast there.

This week, we left after game #2 was finished.

Well, the lane we were put on was beside the start of the ten pin lanes.  That doesn't bother me.  But apparently, it bothered the two guys beside us, who decided to have a chat with me about the people on the right having the right of way and that I shouldn't be bowling when they're bowling.

Brian told me that's league etiquette, because you play lanes side by side.  You don't move into someone's peripheral vision when they're about the release; you wait until they've let go of the ball.  Which is fine.  Except Sunday morning isn't league hours, and I'm not even playing the same sport as them.  And.... the two of them were using two lanes, and they wanted me to wait even if the person two lanes over from me was going up to bowl.

Which is a load of BS ridiculousness if I've ever heard it, because there are 28 lanes at that bowling alley.  If we were all to wait for the people to our right, no matter how many lanes over from us they are, nobody would ever be bowling.

Up until now, for me, it's really been about the mental discipline.  You have to focus.  And if the people in the lane beside you have kids who are running around like crazy and making noise, you can't throw a hissy fit about it.  You go on with your game.  Duckpin bowling isn't easy (many people think it is, mistakenly) but a lot of people play it with their kids because of the small balls.  And on many days (including today... at a different bowling alley) I've had kids on my right, and my left, running about.  We've had kids come and try to take our balls (because we're so nerdy we own our own duckpin bowling balls) and have had to stop them.  Oh whaaaa.  Big flippin' deal.  None of them have ever diminished my enjoyment of getting out of the house and playing a sport I enjoy, which has the added bonus of letting me spend half my time watching my husband's ass.

So these guys this morning... they were the first people to wreck my time bowling.  I wasn't dancing around like a freak or in their lane.  I was in my own lane.  Not playing ten pin bowling, and not league bowling.  Not running around like a mad woman, or a mad duck.  So screw them.

But we left, and ultimately went to a different bowling alley, because they continued to make comments and be ignorant.  I'm sorry, but when you start all the way back by the chairs before doing your run and slide, and that location happens to be on the other side of a concrete support beam from where I am in my own freaking lane, how am I supposed to know you're "going" then?

Yeah, these guys got to me.  And I could block out the kids, and the music and the noise and everything else.  But not them being assholes.  Nobody in duckpins, since we started this in November, has ever acted in such a juvenile manner.  And I know some of the people we're bowling beside are duckpin league bowlers.  We bought our balls on eBay.  They bought theirs from a Pro Shop.

I have to say that, as much as these guys pissed me off, it wasn't because they asked me to wait for them.  The thing is, I actually tried.  Like I said, when they start so far back on the other side of a concrete beam, well, how am I always supposed to know?  And I admit that I bowl largely with tunnel vision, because you focus on yourself.  You have to tune out the distractions.  But what got to me was the continuous comments.  They were rude and critical.  I'm not there on a Sunday morning for that, from people I don't even know, who I'm not preventing from bowling.

However, I can't help but feel I failed a little today.  It would have been better if I'd been able to stick it out, and mess with them all morning long.  And (if it wasn't for the fact that something came up at the last minute and we left after a phone call) maybe I would have done that.

Brian and I talked about it after, and I said these guys are a great example for writers.

WTH?  What did you just say, Sandra?  How on earth are these guys an example for writers?

Writers need to focus on their own lane and tune out everything around them.  It's called mental discipline.  And nothing frosts my cupcakes more than writers who start talking about muse BS and inspiration and writer's block.  Not even two asses at the bowling alley.

Writing is work.  At times it's incredibly enjoyable work.  At times, it's painstaking and frustrating.  But it is work.  There are things you have to know, like when to use a comma and when not to use 20,000 exclamation marks.  How to organize information, what makes a run-on sentence, or why something else is a fragment.  You take the information, and put it together.

When people talk about the muse, what they really mean is that they think they have some silly mystical gift, because they've been "chosen" to have this ability to channel some story.  They have invisible rabbit ears on their head and are tuning in to the next tale that's being transmitted cosmically so that they can type it out and take credit for it.

What a load of hooey.  Whenever someone tells me they aren't writing because they've lost their muse, I have to bite my tongue to keep from telling them that's the stupidest load of crap ever, stop making excuses and get off their lazy ass and do their job.

Yeah, there are things that can happen in a person's life that are big enough to distract them from anything - divorce, illness, death of a family member.  I'm not talking about people who're taking a break because of a life crisis.

I'm talking about people who say they aren't writing because they just don't feel inspired.

As an author, I know it's bull.  As an editor, I don't want to work with anyone who takes that line, because when I give you a deadline, I expect you to do your job.  And unless you have a legitimate life crisis delaying you, I'm not going to accept a lack of muse excuse.

I assure you, if you tell me you've lost your muse, I won't be amused. 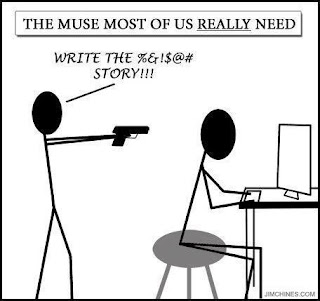 (I absolutely guarantee it would be just as effective if the person standing behind you had no gun as long as his name is Chuck Wendig.)

Next week, I'll be back, bowling duckpins.  And I'll be doing my job - tuning out the world around me to focus on my game - no matter what assholes are beside me.

And that's the same mental discipline I'll take back to my writing.