I am a middle-aged college student. That probably means nothing to you unless you read my blog and listen to me bitch about the profs sucking up all my primo writing time. But one of the classes I’m taking this semester is physical anthropology, which is the study of evolution. And it’s of evolution I wish to speak today. 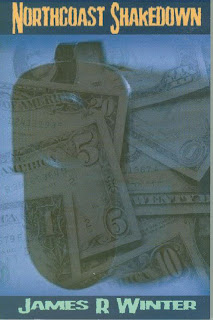 Yeah, that was a long-winded way to get to character evolution, but here we are. Specifically, how do series characters evolve before we ever see them in their debut books. For Nick Kepler, it was a long, drawn-out process. The first anyone saw of him was in the original Plots WithGuns where he’s doing a sort of back-and-forth describing why he’s walking along a deserted stretch of highway at 3 AM in a light rain and how he got there.

That character looks nothing like the one in the outline to Northcoast Shakedown ($2.99 on Amazon, Nook, and Smashwords, not to mention a whole bunch o’ other readers.)  But then he looks nothing like the poor schmuck who is stalked by his client in “Valentine’s Day,” and definitely not the guy who, in a moment of fear, starts boffing his married secretary in Second Hand Goods.

How much of this is the character? And how much is the writer? I’d have to say it’s about 50/50. In the beginning, I had no clue who this guy was. By the time I finished “A Walk in the Rain,” I knew Nick Kepler was, in 2001, 33, played in a bar band that did classic rock covers, and had a friend named Lenny who stole cars for a living. By the end of Second Hand Goods, his life is a lot more complicated.

But I’ve seen this sort of thing before. When Stephen King wrote the first story about Salem’s Lot, there was nothing about the Marsten House or any clue that there was anything more special about the place except for a bizarre spot in the woods where some evil stuff took place around the time Nathaniel Greene was cracking British skulls in that part of New England. One novel and a bad miniseries later, we get a vampire novel that has as much in common with Twilight as the Rolling Stones have in common with the Spice Girls.

A lot of times, the short stories authors create are little more than rough drafts of a character they opted to share with the public. Sometimes the author gets lucky, as I have, and can keep the storyline consistent. Other times, you have to accept the fact that the author had no clue what he or she was doing.

Jim Winter programs web sites by day, attends college and writes nasty tales by night. Born in Cleveland, he lives in Cincinnati with his wife Nita and stepson AJ.  Find out what he is up to at http://www.jamesrwinter.net