Since I have a recently raised to 5-years-old child in my house, most of my reading this year has been aloud and involved books with pictures.  But that doesn’t mean that they aren’t as entertaining for me as they are for my son.  My 5 favorite discoveries of the 2012 are:

1) Goldilocks vs the Three Dinosaurs as retold by: Mo Willems – If you aren’t familiar with Mo Willem, you will be by the end of this list.  This I the newest book by an author who deserves every single starred review he has garnered.  This book is fun to look at.  It is also hysterically funny to read.  In fact, I think I might have enjoyed it more than the tot.  Perhaps we will read it again tonight so I can be sure. 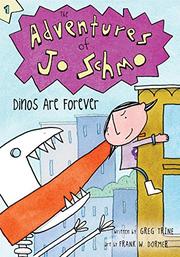 2) Dinos Are Forever (The Adventures of Jo Schmo) by Greg Trine and Frank W Dormer.  – This is a chapter book meant for mid-grade readers about a fourth grade girl who receives a superhero cape in the mail from her uncle and decides to give superheroing a whirl.  With a drooling, side-kick dog and fabulous evil guy laughs (Mwa-ha-ha),  this book has been read several times and no doubt will be read again soon.

3) Froggy Builds a Tree House by: Jonathan London and Frank Remkiewicz – My son loves the entire Froggy series and was thrilled when we bought the paperback of this through his school this year.  Froggy is tons of fun.

4) Can I Play Too? by: Mo Willems – Gerald and Piggie are best friends and all of their adventures are worth reading.  This one came out in 2010, but we just discovered it, much to our delight.  If you have a child in your life, please check out this series and the Pigeon books.  You will be glad you did.

5) The Sandman: The Story of Sanderson Mansnoozie (The Guardians of Childhood) by: William Joyce.  -  Yes, this is one of the books that inspired the Guardians movie.  I haven’t seen the movie, but my son loves both books that are out.  The pictures are lovely and the story is filled with action.  The story is a little dark since it is about guarding children from nightmares, but my son got a bang out of it.

Redshirts by John Scalzi – If a book can not only make me cry while reading it but also make me cry when I’m trying to talk about it, that’s a great book in my opinion.

Fatman on Batman podcast – Kevin Smith’s regular podcast devoted solely to the Caped Crusader and interviewing the creative types that have brought him to life. This is the most passionate, entertaining podcast on my iPod and I’ve listened to just about every episode more than once, the Mark Hamill entry a full three times.

Monster by KISS – This 20th studio album by my first, favorite rock band has echoes and homages to all their past decades of sound. They may not have reinvented the rock and roll wheel, but I sure do love their raucous sound and brash style. Looking forward to the tour next year.

The Movie Quatrain – There were 4 movies I circled on the calendar as 2012 dawned that I wanted to see for different reasons. I enjoyed all of them. “John Carter”: to see, on film, the Mars of Edgar Rice Burroughs come to life was thrilling. “Avengers”: in some ways, the quintessential *comic book* movie and the most fun I had in a theater all year. “The Dark Knight Rises”: A fine, messy, yet poignant way to end the excellent Batman trilogy. “Lincoln”: Seeing our 16th president literally come to life was utterly engrossing.

Eisenhower in War and Peace by Jean Edward Smith – This was my big biography for the year and it happened to be my first about Ike. Good, even-handed account of the general’s life, with special comparisons made to President Grant, our other famous war general. Learned a lot I didn’t know about Eisenhower and my respect for him has only increased.

I decided to break up this list of recommended things I like in 2012 into six categories: movies, TV, music, comics, print only book, and ebook only.

The two movies I enjoyed the most in 2012 were Argo and The Avengers. Argo was a tense thriller that shows just how solid of a director Ben Affleck has become. Alan Arkin and John Goodman were laugh out loud funny and no one ever had so much fun saying  "argo fuck yourself" as Arkin did here. The Avengers was one of the best movie  experiences I've had. The boy and I saw it in a sold out show and the audience was pulled along for the ride and it was a great collective experience. I don't know if the experience of watching The Avengers will be the same at home but I do recommend both movies.

We've been playing some catch-up with TV shows lately and watched the first two seasons of Justified. It quickly became a favorite. There is a lot to like about Justified though it has its faults too (the biggest being that the other two Marshall's are woefully under developed for two people who are in the main credits). Raylan is a great character and so is Boyd, who walks that fine line so you don't know he's believing the God game or not.  From top to bottom this is a great cast of characters and actors, the writing and dialog are up to Elmore Leonard's standards. The second season is stunning with Mags Bennet standing tall as of the great characters of the medium.


Where the hell did The Alabama Shakes come from and why did they take so long getting here.  Their EP last year was concentrated greatness and the full length this year didn't slacken the pace at all.  Hell of an album.

I'm reading a book right now that is available in print only, Uncle B's Drive-In Fiction which is a collection of six novellas by Jimmy Callaway, Alec Cizak, CJ Edwards, Garnett Elliott, Matthew C Funk, and David James Keaton. So far I've only read the first two novellas in the collection and have high hopes for the others. You should check it out too.

My ebook only pick is Hot Wire by Gary Carson. Carson's first novel was, at times, a little too dense for its own good. Hot Wire is more streamlined and works better. It is a crazy novel that is like Repo Man (without the aliens) told in a New World Order setting.

Scalped by Jason Aaron and R. M. Guéra came to end earlier this year after 60 issues.  I hate to compare to other mediums when this clearly stands so well on its own but sometimes you must when trying to make an introduction. Scalped plays out with the type of quality that one has come to associate with this golden age of TV that we are in. All of the quality and long term story telling possibilities that we've seen played out on the screen play themselves out in a different visual way here. Don't let comics scare you, this is a brilliant.

I accidentally deleted Nadia Khan's comment because I am stupid. Sorry.