How Losing NaNoWriMo Helped My Writing

No one really gives a shit whether I finish this novel. Whether I write 10,000 words today or 100, no one but me cares.

I have no editors depending on me. I've signed no contracts, made no promises.

If I said that I was going to set this novel aside and go get some ice cream, you might say "Bring me a sundae."

As the story goes, when a best-selling author was late with his follow-up a few years ago, one of the Big Six publishing houses had to lay off a few folks. They'd expected the book at a certain time. They'd planned advertising, publicity. The author turned the book in the next year. The book was not well received. More people were let go. No one is waiting on his next book.Tom Hanks is taking other roles.

Other writers on this blog and elsewhere have deadlines to meet. Page proofs.Galleys. ARC. Salespeople running across America, telling bookstores about the next novel.

No one is doing that for me. No one is waiting for this novel. No one gives a shit whether I finish this novel.

Years ago I wrote a book that turned into a kind of mystery novel. Good feedback led to changes led to bad feedback. I wrote a sequel to that novel, but never felt much like revising it. So, I have two novels written. Each has its own strengths, though they share a consistent narrative and characters. I quite like much about the books.

I started working on a third book that takes elements from each of the two. A more literary, less plot-driven book. I can write the line -- "the kind of day when the sock drawer had one of everything and two of nothing" -- and not worry about how it moves the plot forward. I can work on scenes with characters, without needing to get them closer to the MacGuffin. I can toy with the writing. I can sculpt.

That's what I've been doing this autumn. Getting lines down. Working on scenes. But I wasn't writing every single day.In a sense, I wasn't moving things along. Which, you know, yeah. I get that.

(In case you give a damn, here's an excerpt from the book.. Maybe you'll like it.)

So when NaNoWriMo rolled around, I figured it was good timing.

I set up an account.I started with the 10,000 or so words I'd gotten down. The ones I liked. I pulled out the untouched moleskine I'd been carrying around. And I figured I'd pull from each of the two novels and work on new for this third, ending up with maybe 50,000 words by the end that I could play with. 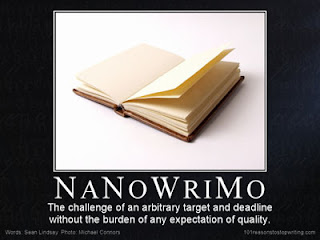 I didn't care that the 50,000 words might be some cut and paste from the old books. I just wanted to have a hunk of words.

(I also have a Facebook page for the band that's in the new book. They're a Dixieland punk band called TUPELO SHIV. You'll like them. Seriously. Like them.)

NaNoWriMo is a sprint. It's intended to get you writing down anything you can, averaging 1,667 words per day. It doesn't matter what those 50,000 words are. Just write. And this is great. But that part of it wasn't for me.

You know that point when you're writing a book and everything ties in? When you're watching Star Trek or reading an article in Forbes or talking to the gal at Starbucks and it's all giving you ideas for your book? That's what I needed to get back. And it worked.

NaNoWriMo was a great experience. I didn't do the Write-Ins in Charlottesville. I didn't read all of the pep talks in my inbox. I didn't message all my NaNoWriMo buddies every single day to ask for updates.

But I did get back to the novel. And when no one is counting on me to finish it, yeah, sometimes that's not easy.

No one is telling me shit. No one is pressing me against deadlines.

Because this is my book. Only mine.

And when everyone else is gone from your house and it's dinner time, you have to decide whether you're going to spend some time and make some gumbo or are you just going to eat a bowl of cereal?

Because I was eating cereal for months, and I got goddamn tired of it.

And I could have kept rinsing out the same bowl, filling it with Captain Crunch, and sitting down in front of SportsCenter.

So, thank you, NaNoWriMo for reminding me that soon, the house is going to be filled with people who are hungry as all hell for something good and I need to get my ass back in the kitchen.

First, you make a roux.
Posted by Steve Weddle at 3:00 AM

YES! That's pretty much exactly how I feel about my book. I got to writing every day, but then I needed map out the next few scenes. True, I haven't written much *every day,* the book is in my head. I'm thinking about it in the shower, eating a snack, driving around town, etc. Glad I'm not the only one who "won" by doing NaNoWriMo.

Honest and well put, I'm keen enough to go over to look at the sample. And I might not care hugely (in the grand scheme of things) whether it works and gets out to be viewed one day, but I do hope that it does. I also love the idea of that less-racy aspect. Go eat turkeys instead of cornflakes.

I've never been much of a fan of the 'just go make some words, no matter how bad and no matter how much you ate them" school. To me, that's like pointing a sculptor toward a block of marble with a chisel and saying "Just start chipping away. Some sort of shape will show up."

Scott, Yeah. It's the momentum, I guess.

Anon, Right. And then the next month the sculptor can pick up the pieces and paste them so that they make an elephant.

Deadline or not, it is always you having to sit down and tell the story. Sometimes it is just damn hard. Anything that gets the story going again is valuable. Congrats on getting it moving again. Do I get to read it when it's done? I really liked the first one I read! I'd be curious to see how this one uses elements of that.