I don't think it's the sort of thing for everyone. And here's why I thought it probably isn't for me --

1. I write slowly. My favorite key is "backspace." I think of writing as sculpting, if you really must know. I'll write a thing, scroll back to it. I'll trim this a little. Drop in a little here. Cut back everything that isn't what I want. This is not a "balls-out" kind of writing speed.

3. I'm busy. I'll get to it when I get to it.I haven't become the fifth best banjo player in the neighborhood by scratching out fiction, let me tell you.

And those are the same reasons I should do NaNoWriMo this year.

1. Yeah. I write slowly. Let's just barrel through this one. I've been writing this novel slowly for, let's see, what decade is it? Time to kick it up a gear, Weddle.

3. Yea. I'm busy. So is everyone. And the way you get something done is to be mostly busy on this one thing. Focus, pal. 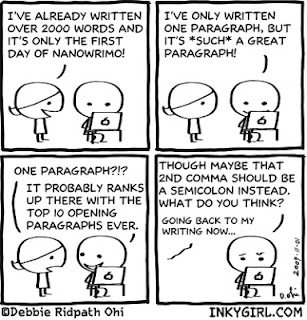 As the clock rolled into November, I was at 10,041 words. That's quite the head-start. I've written some words from scratch. I've expanded some parts. I've cut and pasted from earlier versions of two novels that I'm now "combining" into something new. Today I am at 18,236 words.

So I'm not really using Word Count to judge my progress.

On Friday I was at Code Rutherford B. Hayes. I hope to get to Code Franklin Mint Collection by the end of this week. By the middle of next week, I'm aiming for Railway Station Blues.

See, it doesn't matter what number I'm at today, because I could find 4,287 words in Failed Novel The Second that I want to use in this one. Instead, I've come up with my own system of measurement, which makes as much sense as anything.

I'm not the only DSDer doing this. Scott D. Parker is plunging ahead. Many of our DSD friends and family are also giving this a shot. If you're one of them, how are you doing?

Meanwhile, Stephen Blackmoore has come up with some tips for you.

I have two tips for you.

1. Stay off the #NaNoWriMo hashtag on Twitter until you've hit your word goal. Maybe you can use this as a reward.

2. If you're stuck, don't feel as if you have to keep going "forward." Writing 1,000 words in the middle of your story counts the same as 1,000 words at the end. Work out some descriptions. Take the dialog further than you'd thought. Read pages 14-17 and drop some thoughts in there. Just get those words in there.

This tip works, too. If you need a buddy, I'm right here.

Reality check. James Reasoner just passed the million word mark this year. 5000 of those are in his story for Protectors, and they are damn good ones. He's done this 8 years in a row.
So yeah, NaNoWriMo is a good reality check. A thousand words a day is 365,000 a year, six short novels or one Game of Thrones book.

I lean towards a page or two a day, because I edit too much. I'll learn, eventually...

This all seems like a lot of work for nothing.

If I thought I had it in me, to try again, I would. But since my writing process is much like yours, it is very hard to move forward quickly in a month. I would probably write about the same 6000 finished words I usually write in a month--and it would bear little resemblance to a novel. Just two stories in fact.

I decided to do NaNo this month mostly as a motivator. I know I won't hit 50K by the end of November, but if I hit 30K, that's about 2/3rds of the way through the book I'm trying to write. That'd be awesome. Then I'd know it's a downhill slope in December, with a draft done by January.

Believe me, all my reasons for doing it are yours as well. I need motivation to not just stare at an "outline" doc growing at a snail's pace, or me tinkering with a few "ideas". As Billy Crystal says, a writer writes, always...

For the record, what kicked me in the butt to write was NaNoWriMo 2010. I wrote 50k in 30 days. Finished the book, 115k, in 60 days. Spent 6 months trying to edit it, then another 6 months rewriting it entirely. It was a mess. I could have just edited it as the everyman thriller it was, but it bored me and felt contrived. (Ooh, saved by the FBI! That never happens). I have a solid draft that I am editing now, and I've had 45 stories published while I've been working on this, plus I edited two anthologies. So it works, to get you in gear. I never feel busy enough.