You Call This Disabled?

On Saturday, I was wondering how in the world I came to write a disabled main character into my first noir novel—especially when I really don't have all that much experience with disabled people.

And then it came to me.

I have a hell of a lot of experience with disabled people. It's just that I came to know each of them so well their disabilities became invisible to me, part of the landscape, like the shape of a nose or the sound of a voice—so integrated with how I related to them that the so-called "limitation" no longer registered on my radar.

My first experience with "the disabled" (I dislike that label, but for lack of a better term, that's what I'll use) was as a child. At first glance, Vicki was a young girl in a wheelchair. Her arms and legs were misshapen and tiny, while her face and torso were normal. It would have been easy to withdraw or walk on eggshells around her except for the strength of her personality. She was quick and intelligent, with a bright bell-like voice, ready for lively conversation with anyone willing to see past her physical appearance. 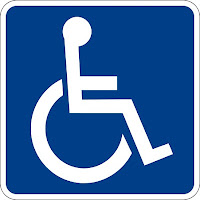 Years went by and suddenly we were 16.  Vicki was not only dating, she was exploring her sexuality. My jaw hit the floor the day she told me about her first highly pleasurable and ear-splitting orgasm caused by a male schoolmate who was "exploring" with his hands underneath her clothes.  He was also disabled. For a "poor little wheelchair girl" as some regarded her, Vicki sure seemed to be having a good time. Me, the "normal" one, was crawling with an inferiority complex and too insecure to go out on dates. In this case, the disabled girl was way ahead of Miss Normal.

Fast forward to 2002, and I was pursuing entertainment journalism in Hollywood. One of my fellow journalists, let's call him Carson, had a missing hand. He opted for no prosthetics, just left his arm the way it was, in short sleeved shirts. He was sent out on plum assignments by the editor of a premiere screenwriting journal—interviewing the likes of Oliver Stone, David Lynch, Harlan Ellison and more, A-list all the way. Carson's work was superb. He earned every golden assignment thrown his way.

I only realized how laborious transcription was for Carson the day I broke out my laptop and starting typing at my usual speed, about 80 words a minute. Carson stared at my hands but he didn't say anything.  In a flash, I realized that he must have spent dozens more hours than I had to, typing out lengthy interviews and editing them into shape.

Did he ever complain? Never heard a word. Because he never spoke of it, no one around the magazine thought to treat him differently or question his ability to handle the heavy-weight work. Carson showed people the way he wanted to be treated and we just naturally responded. It was a great lesson.

I could go on and on with more examples of disabled people including Mark, my landlord, a blind guy who works an IT job 40-hours a week and owns the little place I rent. When Mark walks around the property it looks like he can see, but that's only because he has every step and object memorized.

All these people (and more could be mentioned) taught me one of the most important things I ever learned: the biggest hurdles to anything, including disability, lie in the mind. We are all as abled or disabled as our minds allow us to be. Vicki, Carson and Mark inspire me and I'm so lucky to know them.

What do you think? What's your experience with disability?

For more than twenty years I worked with a woman with multiple disabilities and health problems. She couldn't walk without crutches, and she was deaf from birth. Her brother once told me that the doctors had expected her to live only about six months, but she had extraordinary tenacity in all things. In fact, she could be very stubborn and difficult.

I picked up a little ASL from her, but I always thought her immediate colleagues, at least, should make a more organized effort to learn it. There would have been great resistance from the other staff, unfortunately, and we took the path of least reisistance, which was learning to interpret her efforts at speech. We did become adept at that. People who didn't work with her every day usually understood nothing.

She retired two years ago. I'm a little ashamed at my relief, but it's real.

Priciest of the 3 compared here I think Price competitiveness - 55% 734.406 ? It will help result in the procedure for organizing and maintaining products super easy. With this, warehouse personnel will discover it a lot easier to trace and monitor the inventory of stored items. Positive definite international logistics park deputy general manager GengMaoFeng introduces, although this year at the end of December logistics park can all, including all builds practice sincere intent is tasted, the guest logistics technology Co., LTD, haier electrical appliances dozens of enterprise early and logistics park, currently 95% of the park sign the rental, and many have enterprise is with us. Warehousing logistics land popular degree shows one spot.