My Introduction for Beat to a Pulp: Superhero 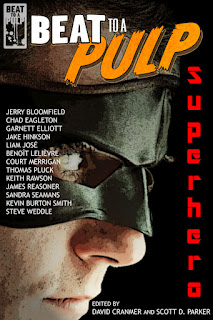 (When David Cranmer asked if I wanted to help him put together his latest anthology, Beat to a Pulp: Superhero, I jumped at the chance faster than a speeding bullet. I have loved comics since the day I first read them, and I've read them, almost without a break, for over 35 years. As teaser to the anthology, I present my introduction. The book will be available soon [and, as I'm writing this on Thursday evening, it might even be available now].)

In the 2008 film, The Dark Knight, the Joker tells Batman a simple truth: "You've changed things. Forever. There's no going back. You see, to them, you're just a freak. Like me." The roots of that famous line, uttered by one freak to another, can be traced back to one man: Frank Miller. And that's when you realize that it's all his fault.

What did Miller do? Largely, as the result of his 1986 Batman story, The Dark Knight Returns, he brought serious, heavy, psychological issues to the realm of comic books all within the gritty sheen of reality. And, yes, he brought in a lot of violence. For better or worse, he changed superheroes. Forever.

Depending on your age, the word superhero conjures particular images in your head. If you were a child in the late 1930s and 1940s, during the dark days of the Depression and World War II, the superheroes you think of are color-splashed Superman, Batman, Robin, Wonder Woman, and Captain America. If you're a baby boomer, your heroes of the atomic age and the Cold War are Spider-Man, the Fantastic Four, Iron Man, the Avengers, and the updated Flash and Green Lantern. If you are like me, a child of the 1970s and early 1980s, all the above were firmly entrenched in the collective consciousness, with a few interesting space aged additions: ROM the Space Knight, Cyborg, and the mutants from Alpha Flight. For those readers who were born in the 1980s and came of age in the 1990s and 2000s, superheroes often take a darker turn: Spawn, Animal Man, Hellboy, or Rorschach.

We all know why these heroes do their thing. Stan Lee, in his origin of Spider-Man sums it up best: with great power comes great responsibility. And all the antics of these folks really are philanthropic. They really are trying to help people. And, through the ages, the stories of the colorful world of comics and superheroes, while grandiose and over-the-top, usually skirted real-world issues. Sure there were some doses of reality injected into the tales--the alcoholism of Tony Stark or the drug addiction of Speedy, Green Arrow's sidekick--but writers did not dwell in the bleakness.

Miller did. In Miller's version of reality, Bruce Wayne is just as mentally messed up as the Joker. The hero, like the villain, is basically a psycho, and it's up for us normal folk to pick a side or get out of the way. And where Miller went, others followed. In the past twenty-five years, all the major characters have had their turn at gritty reality. New characters from new creators have popped up, each with their own psychological scars and back stories. Serious questions have been asked. What kind of toll does it take on a person's body over the years as he patrols a city night after night? What kind of mental scars form when you witness friends perish or worlds collapse? What is that special something that stops a so-called "hero" from succumbing to the darker sides of every issue? As an adult, I enjoy these serious conversations and how these stories speak to the deeper, darker parts of human nature, the parts we normally never let out.

But there's another part of me that loves the kookiness of it all. Staying with Batman but changing Jokers, in the 1989 Batman film, a different, funnier Joker asks a pointed question: "Can somebody tell me what kind of a world we live in where a man dressed up as a *bat* gets all of my press?" In this real world of ours, you might ask a corollary question: why does a man dress up as anything and go out and perform feats of wonder?

One reason might be that it's just so much fun! Think about it: you're parents are murdered right in front of your eyes and it makes you so angry that the only outlet you can conceive is to dress up in a costume and fight other bad guys. Or: you are a high school science nerd who gets bitten by a radioactive spider and, after your uncle is murdered, you decide to dress in a costume and fight other bad guys. Or: a dying alien, the first one you've ever seen, bestows upon you a magical green ring and tells you that you are now a space cop. Or the quintessential example: you are the last son of a dead planet and you're alien DNA makes you more powerful than a mortal man on this, your adopted planet.

For a long time before Miller's seminal story, being a superhero was fun. Yes, you had to combat and defeat an army of mole men or the crazy villain who always sent you riddles or the weirdo imp from another dimension, but, in the end, the good guy always won, the bad guy was always defeated--but never killed--and the day was always saved. Being a superhero and, more important for us mortals, reading about them, was pure bliss. They took us away from reality. Who the hell wanted to read about the bad parts of life if you saw the bad parts every day? Comics and superheroes transported us to other dimensions, other worlds, where heroes would always put things right.

Most of the major superheroes have been around anywhere from fifty to seventy-five years now. Countless writers and artists have each stamped their own unique take on these characters, changing them with the times--powerless Wonder Woman in a while suit anyone?--but the core essences of these heroes have remained the same. And that is the key to enjoying the exploits of superheroes. They are, basically, a blank canvas with carefully shaded borders around the edges. Any writer or artist can take the basic tenant of any particular hero and do what they want, to write or draw what the word “superhero” means to them. Some, like Miller, punch holes in the frame and let in something new. Others, like most of the writers before Miller, were happy and content to play within the confines of the existing borders. Writers and artists working today have the chance to do multiple things with these characters. If they want to stay within the known confines, there are always stories to tell. If not, well, the sky's the limit.

It is this sense of opportunity that the writers of this anthology bring to bear in these tales of superheroics. These stories run the gamut, too. There is the innocence of Billy Mitchell, the six-year-old Red Avenger in Kevin Burton Smith’s story. Here, that special something that draws us to want to don a mask and tie a towel around our necks is on full, nostalgic display. Steve Weddle dissects the reality of a world in which you have super-powered “others” in the midst of normal people who tend to quote only parts of the Bible. And there is the hero of James Reasoner’s tale, a story set in a time not usually associated with superheroes—the American Revolution—but nonetheless finds the classic essence of a superhero.

Did Frank Miller change things? Absolutely, but not in the way you might think. He expanded the definition of what a superhero is and what a superhero could be. He included more people into this great collective of readers and viewers who enjoy the adventures or misadventures of superheroes. He was so successful, in fact, that if you go into any comic book nowadays searching for something new to read no matter your predilection, there will be something for everyone.

Just like this anthology. Enjoy.
Posted by Scott D. Parker at 1:00 AM

Dammit, I had a whole reply written and then Blogger says it's too long to put in the comments.

Still...that solves the problem of what to put up on Thursday, result.

Looking forward to kicking back this weekend with this one.