I Welcome Our New Robot Authors

If you're like most writers, you probably like to sit in the basement, passing gas, and playing "When Did I Eat That?" all morning.

Lucky for you that Combinatorial Publishing is now a thing.

All you need to do is to come up with a topic. Already, a sizable number of books exist concerning Snooki. Also, shark attacks. Archaeology. Here are some of their best sellers.

After some thought, I decided that there are too few books about a certain subject, so I created my own book -- 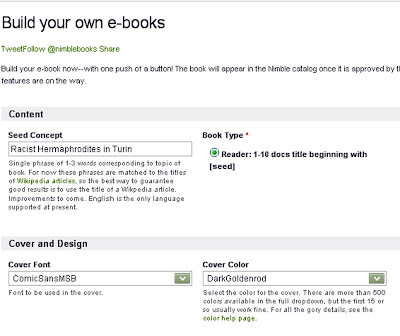 I typed in that, then clicked a thing and voila:

Your search terms have been submitted to Nimble Combinatorial Publishing and the e-book is being built now.  If the alpha system understands the search correctly, the book will appear in the catalog after review by the publisher, typically within 24 hours.  In future, notification of status will be provided and appearance in the catalog will be nearly immediate.

So, I'll soon be a non-fiction author, I guess.

Here's more on Nimble Books and CEO Fred Zimmerman, via the Boston Globe:

Zimmerman’s company, Nimble Books, is a small part of an industry that looks set to balloon. At its most vulgar, auto-generated content is used to churn out Web pages whose only purpose is to snag online searchers and drum up advertising. On a more substantive level, outfits like Narrative Science and Automated Insights are producing computer-generated articles on everything from Little League baseball to Wall Street trends. There are even efforts underway to produce automated snark, to cover the blog market.

But Nimble Books is something else—and the difference isn’t simply a matter of degree. A culture does not define itself by its ability to accurately portray box scores or stock movements. Our books, though—these are supposed to be the things that elevate us, that endow us with meaning. It’s hard to see where “Shark Attacks” fits into the literary canon. “Do we even know what a book is any more?” says Calvin Reid, senior news editor at Publishers Weekly. “It changes all the time.”

Right now, it seems, the Nimble Books software runs to Wikipedia and grabs some information. The idea, though, is that it will run around the internet, picking up pieces of information on your topic, then plop them into an ebook for sale.

By the way, Forbes also had a lovely article about the idea.

Right now, this seems mostly a non-fiction kind of thing.

Of course, fiction authors have had to do this the hard way, copying and pasting passages from Ian Fleming and Robert Ludlum together, trying to make sense of them. I wonder how we can capitalize on this so as not be required to write anything original.

Take, for example, the recent spate of Public Domain Literature PLUS Monster story -- Jane Eyre and the Romulans, Sense and Sensibility and Salamanders, on and on. These authors have been forced to come up with their own salamander portions of the books. How 20th-century!

Imagine being able to type in a few book titles -- Moby-Dick, Harry Potter, 50 Shades -- and having a freshly derivative novel to sell.

These could be cheap, gimmicky books. As Zimmerman has pointed out, these books cost a couple of cents to put together. Even if, for some reason, the fiction books cost a little more, you'd still be able to make money from writing.

So, even if the book were to cost a nickel produce, you could sell it on Amazon for a dollar and, even with Amazon's thirty-cent cut, you'd be ahead.

This is the path to publication. As the noted book-salesman John Locke said, you don't have to write good books. You just need to write entertaining books.

Speaking of entertaining books, friend of the blog Chris F. Holm had his second Sam Thornton book, THE WRONG GOODBYE, come out this week.

I've said that these books from Holm read like Jim Butcher meets Charlie Huston. I stick by that. There's this gritty, noir telling of a fantasy story, but the telling itself is so real, so palpable and engaging. Here's my Amazon review of the first one in the series, DEAD HARVEST.

And the second one, THE WRONG GOODBYE, really cranks it up a notch, especially the demons in a cave section. You'll want to get the book.

My guess is this will be one of the last really good books before the world is over-run with robot-generated novels.

I tried to do the whole auto-generated fiction thing with a short story, called Pulpulous. There are a few trillion unique variations, I think.

What was interesting was the way they all turned out to be exactly the same story, no matter how many variables I put in. It's a lot harder than it seems to auto-generate anything entertaining, it requires a lot of creativity. I don't think real writers have anything to worry about from robots, for a long while.

Doesn't seem like this would be entertaining.
Then again, the fuck do I know?

Finally, someone took all that pesky writing out of writing. And now writers can just point their weird uncle who's always pitching them ideas toward the magic book-generating button, so that he can leave them alone and go back to muttering about what he'd do if HE were president.

Oh, and many thanks for the kind mention...