Cry Wolf, And Unleash A Load Of Crap

Many human beings are complete assholes. They're self-centered and vain, vile, mean, and brutish.

They do terrible, horrible things, offering no consideration at all for anyone else. They're assholes.

They clog up your day, throwing off what might otherwise have been a good morning.

The asshole who cut you off while you were at the middle school dropping off your kids.

The asshole who woke you at 7 a.m. because he needed to get his grass cut before he left later that morning for the beach.

The asshole who was supposed to help you finish the quarterly report, but decided to take two days off this week instead.

There's so much crap floating around, you can have no doubt that the world is full of assholes.

But targeting someone for being an asshole just because you have A Cause and something to prove isn't fair to that person and makes you an asshole. Worse than that. It wrongs the other person and hurts your cause.

I don't know whether I want to call this "A Cause," because it isn't exactly what I mean. But, let's be honest, there are some creepy, weird, rapey dudes out there. And more and more we're hearing about them at writer conventions.

This summer, there was considerable nastiness at Readercon. Genevieve Valentine blogged about it.


Because seriously, let's review. My boundaries were violated physically, verbally, and in terms of my right to feel personally secure. In addition, within minutes of meeting him, I was told to stop saying things, because it made him somehow unable to control his thoughts, which is bog-standard thought policing. And I was subjected to not one, not two, but THREE instances of the man in question hovering near me because he wanted to apologize, and he wasn't going to stop until he had had his say. (If this sounds like stalking, I want you to think about that.)

There was considerable discussion, responses from con organizers that proved inadequate, follow-up responses, a post from Mr. Scalzi, and more and more attention. You can read about reaction and responses here.

I am not a woman. I have absolutely no idea what it feels like to be cornered by a man at a bar or convention conference room or the local supermarket.

This harassment happens. Stalking happens. Sexist behavior, online and in-person, happens. It's terrible, horrible, and folks need to stand the hell up and fix it when it happens. And make sure it doesn't happen. When this happens, it isn't just women who need to stand up. We guys need to publicize and prevent. We need to make sure that people -- men, women, children -- are safe, especially at a damn convention where you're supposed to be talking about books. C'mon.

So it's completely stupid as hell to go after sci-fi author Patrick Rothfuss for a blog post he wrote about The Hobbit movie. In the post, Rothfuss uses an old crush to stand in for the boyish love he had when he read The Hobbit and contrasts that with the dolled-up movie version that he compares to a stripper. It's kind of like that J. Giles Band song "Centerfold." (Kids, ask your parents.)

Rothfuss is also taken to task for promoting a calendar of some dude's artwork "which turns female literary characters from Twain and Dickens novels into 'Sexy but not smutty' literary pin-ups." (Here's his post about the calendar, with images.)

Then he's condemned for hugging a fan at a convention. 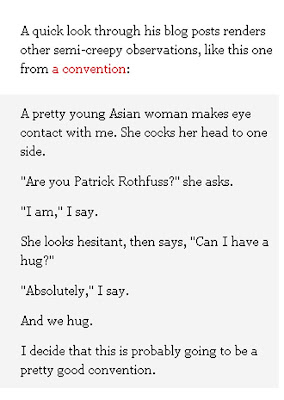 Can you imagine the discussion of this article?

-Did you hear about the author at the sci-fi convention?
-No, tell me.
-This fan asked for a hug.
-OMG. What happened?
-He hugged her.
-He didn't.
-He totes did.

As one commenter said of the attack post, "I've been thinking about this for a whopping... five minutes or so...My panties remain un-bunched. Am I alone in this?"

No. You're not alone. Most of the comments I've read agree with that comment.

This next comment, though, pretty much covers the awfulness: "I haven't read any of his work, but I'd be shocked if this guy is even capable of writing a remotely well-developed, nuanced, believable, human-resembling female character. Shocked. Honestly though, I don't know what to do with these guys--they may mean well but they seem like they've never once thought about what it might be like to be female in the real world. Make them take a seminar led by Joss Whedon and Wil Wheaton? Make them read a bunch of sci-fi/fantasy works written by women?"

The comments that start "I haven't read any of his work, but..." are always the best, aren't they?

I haven't been to the moon, but I bet it's made of feta.

I haven't seen the new movie, but I heard it's full of misogyny.

I haven't had my head out of my own ass in years. Butt.

So, this commenter has devised a 12-Step program to fix Mr. Rothfuss. How delightful. Yes, read a book by a woman. That's clever. Also, take a class from Wil Wheaton. Wil Wheaton, by the way, is a guy. So, uh, I dunno. Um, commenter, maybe you were being facetious and clever, but probably not. You know, I haven't read any of your other comments, but . . . .

Rothfuss, from the evidence that has been presented to the court, is Not Guilty of being a sexist asshole, despite the claim of the Jezebel blog that he writes "icky sexist" posts.

We've had a number of so-called "witch hunts" in the writing community. From sock puppets to sexism, if you're going to attack someone, you damn sure better be fair to that person.

The victims of the real and actual assaults deserve that. Someone (GValentine, for example) who was threatened by a man at a sci-fi convention had A Real Thing happen to her. Making up offenses -- like this "fan hug" or an author's suspected inability to create a "human-resembling female character"-- is terrible.

If you fly off attacking people just to draw attention to your cause, you're not only unfairly hurting them, you're doing a great disservice to your cause.

People will think, "Well, there they go again, Calling someone else sexist. Must be a Thursday."

And you don't want that. Because there are real, honest-to-goodness assholes out there making people feel uncomfortable, threatening their safety, doing terrible things to people. And this needs to stop. And your wild, link-bait attacks have to stop.

If you want to stop the stalky, awful behavior of men cornering women, of men belittling women online, of men touching and threatening women, then you have to be clear and precise. Thorough, but fair. You have to call out the real nastiness and spread the word so that the rest of us can join the fight to stop this. But if you are going to attack people for doing something wrong, you have to be right.

You can't go around shitting on everyone. That makes you an asshole.
Posted by Steve Weddle at 3:00 AM

Someone dissed the Hobbit movie?? Attack!

As a woman and a survivor of sexual assault, I'm getting sick and tired of these women jumping on every man that smiles at them or holds the door. Here's an idea for you guys. Don't smile at any women for a week. None of them. Don't hold the door. Don't say hello. Don't wish them a good day. If they can't behave like human adults and have normal interaction without seeing sexual harassment in everything then give them the same treatment they're trying to give you. This does not apply to your wives, girlfriends and other family and close friends btw. Just the crazed bitches that seem to be crawling out of the woodwork.
Ladies. Not every man that smiles at you or says hello is thinking about raping you. Get over yourselves. Believe me, I have more reason than most of you to know there are predators out there and they wear the faces of family and friends more often than not, but I'm not painting all men with the rapist brush and neither should the rest of you.

Some of it is awkward nerd behaviour and some is sexual assault.
Can be rather difficult to tell them apart.

Some people (men or women) are unaware that they're too aggressive or whatever. On the other hand some people (men or women) are way too sensitive and nobody but the most highly progressive PCers can be tolerated by them. Unless there is a videotape of what went down, who can tell what really happened? It's just he said, she said, they said. On the one hand, I'd say that's what videophones are for. If it's really that bad, whip it out and tape what's happening. On the other hand, some people need to toughen up, learn how to take handle a grilling (or make it into a joke) and "throw some back." These are the skills we need to learn to "play well with others." The world isn't going to change to be kinder to sensitive people. If actions and words don't qualify as illegal, then there's a game to be played, and you can choose to develop skills to play it or take your ball and go home.

I prefer to stay and play.

The Kingkiller Chronicles are good books. The first two. I haven't read the third.

If we should ever meet in person, Steve, let me just make it clear that I do NOT want a hug.

I think this is more Jezebel trying to fan the flames of Writers Behaving Badly. I didn't read his Hobbit review. It is a bit creepy, but I think the vitriol was more toward him slamming a big movie nerds will love.