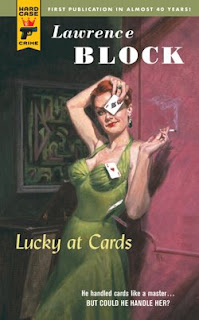 Lucky at Cards is the second Lawrence Block/Hard Case Crime book I read. The first one I read was HCC’s very first publication, Grifter’s Game. And this is the first Block book I read after I started documenting and reviewing book on this blog.

Lucky at Cards finds one Bill Maynard in a dentist’s chair, having the dentist repair his teeth after a “misunderstanding” in Chicago. Block never names the city but you get the gist that it’s east of Chicago and west of New York. Thus, it could be any city and that makes it fun. Sy Daniels, dentist, invites Maynard for a game of poker with his friends that evening. Maynard, short on cash, accepts. You see, he’s a cardsharp (yes, sharp, not shark like I thought it was) and he knows he can cheat his way to some dough. And that he does…until the host’s wife, Joyce Rogers, comes into the room and steals Maynard’s breath away. Not only that, she calls him on the cheating using code words that only they would know. In short order, Joyce is naked in Maynard’s hotel room and they have hatched a plan to con her husband, Murray, out of his wife and his money.

The beauty of this book—the first con-game book I’ve read since I really dove in the deep end of reading crime fiction—is in the great lengths and details Maynard tells us about as he plans and executes his con. Little things, like changing his voice and his demeanor. And I thoroughly loved Maynard’s fast hands both at the poker table and in the process of the con itself.

Block’s humor and wit are on display here. Can’t quote much because I listened to Lucky at Cards via Audible. The reader, Alan Sklar, was good, putting lots of emphasis in his vocal characterizations. In fact, I actually laughed a few times aloud and alone in my car. Have to love that. Moreover, this is not the first book published during the formative years of rock and roll that has characters lambaste the new music. I chuckle every time.

One thing that struck me was the sex. This book was originally published in 1970 or so and the stereotype of books of this time is that things are implied but never explicitly stated. (That is my impression based on the books I have read so far.) Block pretty much puts it all out there, cleverly glossing over graphic details with euphemisms that leave little to the imagination.

The ending got me. Surprised me a little. The entries from HCC that I have thus far read have almost all had a particular type of ending. (You know what I mean.) Lucky at Cards didn’t. It was a good ending. It just wasn’t what I thought. Whereas the ending of Branded Woman or Little Girl Lost slaps you across the face, making sure to dig in the nails, Lucky at Cards slaps you another way. More in line with Kiss Her Goodbye. It isn’t bad and I am trying to dance around the fact without giving anything away. I really liked the change of pace.

This will not be my last Block book. I know HCC has published at least one more but I’d like to try one of his burglar books. And it has reminded me of a famous short story that I want to go re-read. I can’t tell you the title…or I’ll give away the ending. Just read Lucky at Cards. It’s a sure bet.

What I Learned As A Writer: Another thing I noticed with Block is that he always tells, in a few short words, what foods and drinks his characters are enjoying. It’s a little thing, really, but it brings the reader in that much more. Oh, and the ending. It proves to me that a writer can vary the endings of various books and still achieve the desired outcome. It's a good lesson.
Posted by Scott D. Parker at 1:00 AM

Scott, you sold me. Of course, Hard Case does such a gorgeous job on the cover art, it's great to have just because it looks good on the desk. But Lawrence Block deserves every praise. Nice review.

Picked this up for a dime at a thrift store. Lawrence Block, so I figured I'd grab it. Maybe I'll move it up in the TBR pile now.