Of the 83 books I've read this past year, two thrillers stuck out as top-shelf books. One is Owen Laukkanen's THE PROFESSIONALS. The other is THE TRINITY GAME, by Sean Chercover.


Daniel Byrne is an investigator for the Vatican’s secretive Office of the Devil’s Advocate—the department that scrutinizes miracle claims. Over ten years and 721 cases, not one miracle he tested has proved true. But case #722 is different; Daniel’s estranged uncle, a crooked TV evangelist, has started speaking in tongues—and accurately predicting the future. Daniel knows Reverend Tim Trinity is a con man. Could Trinity also be something more?

The evangelist himself is baffled by his newfound power—and the violent reaction it provokes. After years of scams, he suddenly has the ability to predict everything from natural disasters to sports scores. Now the mob wants him dead for ruining their gambling business, and the Vatican wants him debunked as a false messiah. On the run from assassins, Trinity flees with Daniel’s help through the back roads of the Bible Belt to New Orleans, where Trinity plans to deliver a final prophecy so shattering his enemies will do anything to keep him silent.


Using the email machine at DSD, I did some Q&A with Mr. Chercover.

Steve Weddle: Daniel Byrne. The Office of the Devil’s Advocate. Tim Trinity. What part of this story did you start with and how did it develop?

Sean Chercover: It all started with Tim Trinity. It was the first time that a character popped into my brain fully formed. I didn't need to write character sketches or list attributes or do pretend interviews with the guy, he just came into my head as a complete person, and in that instant I knew everything about him - his hopes, fears, beliefs (or lack thereof) ... I knew he was a con artist, a TV evangelist, a prosperity preacher who came up on the tent revival circuit and was now a millionaire, I knew that speaking in tongues had always been part of his routine, but that the tongues were suddenly beyond his control, happening to him. And I knew that if you decoded the tongues, he was predicting the future with frightening accuracy.  Within seconds, I knew that his predictions of professional sporting events would cause the mob to want him dead, and that the Vatican's Office of the Devil's Advocate would send an investigator to debunk Trinity before the world could learn of his gift, and that there would be a personal backstory between the Trinity and the investigator. The rest developed over time.

SW: As readers, we’re a little ways into the book before the Las Vegas contingent makes an appearance. Of course, their involvement makes perfect sense, but I wondered whether you knew all along you wanted to involved them or whether it was something that came to you as you worked out the story.

Sean Chercover: I knew all along, but it was important to do a little world-building around the Vatican and Daniel Byrne and the larger shadowy groups who operate behind the scenes (the Foundation and the Council) and who are important to books #2 and 3, before I brought in the Vegas mob guys.  It's a complicated story with a lot of players in it, and I felt it necessary to hold the Vegas guys back until I set the other plates spinning. 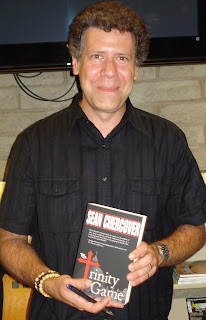 SW: This thriller is quite a departure from the Ray Dudgeon/Chicago books, in terms of character, narrative, and scope. When you’re mostly known for the Dudgeon books, folks tend to see this novel as the aberration. Yet, you’ve written so many other stories. Considering the marketing and promotion aspect of things, how different is it to have this thriller out there? Are you replacing your trip to Bouchercon with a trip to ThrillerFest? Is it really that much different after all?

Sean Chercover: I've never been particularly interested in parsing subgenres. I just love fiction. Good fiction. Mystery, thriller, espionage, sci-fi, dystopic zombie romance, whatever. If it's good, I love it. If it sucks, I don't. So yes, the Ray Dudgeon books are hardboiled PI mysteries (although technically you might argue that they have a thriller structure, since in BCBB you know the identity of the bad guys from the get-go and in TC fairly early, and the focus is more on what happens next than on what happened before) and THE TRINITY GAME is clearly a Thriller. A religious/conspiracy/espionage thriller with a dash of maybe-paranormal? I dunno. I'm just grateful that people seem to think it's a good book.

As for Bouchercon and Thrillerfest, I say; BOTH!

SW: Following on that theme, you have two mystery novels, this thriller, and many more stories out there. In your most fleeting-est writer moments, what’s the oddest story you’ve given even the slightest thought to writing? Dragons? Demons? A historical piece set in the eleventh-century?

Sean Chercover: Oh, the inside my head is not a safe place, and I'm reluctant to reveal the things I consider in my "most fleeting-est writer moments."  As for what I might actually inflict upon the world ... writing THE TRINITY GAME has been very liberating. It's not the least-strange story in the world, but I think I pulled it off, and I may continue to stretch out into the strange, when the urge strikes.

SW: THE TRINITY GAME seems a “Fully Realized” book, in terms of its world and characters. What sort of prequels or sequels or side stories have you considered?

Sean Chercover: First, thank you - that's very gratifying to hear.  I'm almost done the first sequel, THE DEVIL'S GAME, which will be out (I think) next summer. And there will be at least one more after that, which I've got character arcs for, but haven't worked out in detail. I've also got a few story threads that probably won't play out as novels, but exist in the same universe as TTG, and those may become short stories or novellas.

SW: In a recent interview, Sonya Chung asked this of James Salter, and I’d like to steal the question –How and when did you begin to recognize what kind of writer you are/aren’t?

Sean Chercover: I don't really think about what kind of writer I am or am not. I'd like to be the kind of writer who doesn't suck. But my focus is on the work, not on self-definition.

SW: Some writers, if they’re writing about a contemporary American novel, find they can’t read anything close to that while they’re in the project. They can only read fourteenth-century historical set in Mongolia. Or they only read reference books while they’re in a project. Do you find yourself limited in your reading while you’re writing?

Sean Chercover: Not anymore. While writing my first novel, I didn't read any PI fiction, or anything written in the first-person, or anything that was remotely hardboiled in tone. When I started writing my second, I narrowed the restriction to simply not reading anything written in the first-person.  But about halfway through the second book, I felt that my writing voice was sufficiently locked-in, and I dropped that restriction as well. Now I just read whatever the hell I want.

SW: Who is a writer most readers don’t know about, but should?

Sean Chercover: Russel D. McLean is a terrific writer, but not as widely known outside of Scotland as he should be. Check him out.

SW: You have a reputation of being an author who straddles the American/Canadian border. How has this impacted your writing, this Toronto-Chicago (and others) type of connection?

Sean Chercover: The impact was huge, not just on my writing but on who I am, how I see the world.  I'm a dual citizen, born to an American mother and Canadian father. Growing up, I spent the school year in Toronto and summers in small-town Georgia. Quite a culture shock. Also, my father was Jewish and my mother's background is Irish. To Jews, I was not a Jew because my mother wasn't, and to Gentiles, I wasn't a true Gentile because my dad was Jewish. In the eyes of both groups, I was Other. And I also got this, to a lesser degree, with the whole American/Canadian thing. It gave me an intense dislike for tribalism of all kinds, and it also made it more difficult for me to classify any individual as Other. And it gave me the feeling of being a bit of an outsider, no matter where I was. Which I think is valuable to a writer.

SW: You have an opportunity to travel back in time for an evening. I know you’d pick a Bob Dylan concert. Which one? Rolling Thunder? Something from a New York coffee shop in the early 60s? Royal Albert Hall?

Sean Chercover: I'd be tempted not to waste the opportunity on a concert when I could do something of real importance, like strangle Hitler in his sleep or roll Jimi Hendrix onto his stomach. But then, I can't predict what unintended consequences might result from my meddling ways ... maybe it would be better to just take in a show. If Dylan, I'd take Rolling Thunder. But I've seen Dylan a number of times (and likely will again) so I'd probably go to a concert by someone who died before I got to a concert.  Bob Marley. Or The Clash.

SW: THE TRINITY GAME has been out almost a month. How has it been received so far?

Sean Chercover: The reception has been incredible. We hit the Wall Street Journal bestseller list in the first week of release, which was as thrilling as it was unexpected. But the biggest surprise has been the emails I've gotten from clergy - a Baptist pastor and two Anglican priests, all of them praising the "good theology" in the book and the way it addresses the struggle with faith. The fact that the book has gotten a thumbs-up from both hardcore atheists and men of the cloth tells me that I succeeded in my aim to approach religion honestly, from both sides. Of course, I've also gotten more than a few crazy emails condemning me to the fires of eternal hell, but I guess that's to be expected.

Get your copy here.

Welcome back, Sean. It's been too long.

Thanks to both Steve and Sean for a really interesting interview. The timing is perfect as far as I'm concerned; I'm about three-quarters of the way through THE TRINITY GAME right now and I'm loving it.