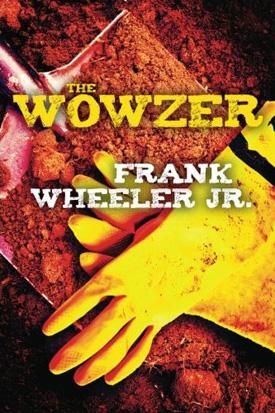 In the Arkansas Ozarks, old-timers spin tales of the Wowzer, a giant panther-like creature that decapitates those who wander too far into the woods. County sheriff’s deputy Jerry was raised on Wowzer stories, but they aren’t enough to stop him from carrying out his own business in the remote hills. Jerry’s more than a sheriff’s deputy; he moonlights as muscle for local drug traffickers, who sometimes need people to get hurt—or get dead.


Fortunately, Jerry’s pretty good at his job. And since Tom Haskell runs the sheriff’s office and the drug-protection racket, Jerry doesn’t see much of a moral dilemma. That is, until he starts thinking about getting out of the trade, and then things get complicated fast. For starters, Jerry’s girl Maggie flees the state after learning about a disturbing diagnosis tucked inside Jerry’s psych report. And now Sheriff Haskell is dragging his feet paying Jerry his cut of the drug money. Is Haskell just reluctant to lose his top muscle? Or is he plotting to take out the man who knows his dirtiest secrets? Fans of hardboiled, “country noir” fiction will love gnashing on Frank Wheeler’s violent and darkly comic debut, sneaking a glimpse into the mind of a killer whose inner monster is about to be unleashed.


Steve Weddle: What’s the one book you most often suggest to people?

Frank Wheeler, Jr: There’s a couple, of course.  For fiction fans, I often suggest “Old Man and the Sea.”  I’m still in awe at how Hemingway managed to pack so much into a hundred pages and change.  That’s how you do it.

For writers looking to improve their craft, I suggest Forster’s “Aspects of the Novel.” It still gives the best, simplest, and most useful overview and breakdown of how a novel works.

SW: You’ve said your family stories pushed you towards THE WOWZER. What other family stories have you heard that would make good stories? Or what other overheard stories are you wanting to tell?

FW: My former-cattle-rancher great uncle in Oklahoma told me plenty.  I’ve got another great uncle who, along with my grandma, was raised in northern Louisiana.  He was a one-legged truck driver and later raised dachshunds.  Another uncle, from the Arkansas bunch, was a submarine commander in the nuclear navy.  I’ve grown up in the best possible place for a storyteller to be… surrounded by other storytellers whose experience I may profit from.

SW: Do you think being labeled “Crime Fiction” helps market your book? Does a label like “Rural Noir” provide too tight a limit?

FW: Sure.  There are lots more people who read “Crime Fiction” than there are people who are turned off by it.  I don’t object to the label “Rural Noir” because that’s what this book is.  A story set out in the woods can be just as interesting as one set in a big city.

SW: What’s your ideal book reading as an author? As a listener? Do you prefer readings from the work followed by questions and answers? Do you prefer stories about how the book came about?

FW: Truth be told, I haven’t given a reading of my work in close to ten years, so I really couldn’t say.  As a listener, I like the Q&A to follow the reading.  And I find that the stories about how the book came to be are often the most interesting part of the reading.  Frequently, I can relate to them, and it makes my own process not seem so arbitrary or directionless.

SW: As a debut novelist, what’s the one thing you know now that you wished known two years ago?

FW: I wish I’d known that it can take a lot of time to get a manuscript from a submitted draft to a printed book.  And I don’t just mean the calendar days.  The time feels different, passes more slowly.  That whole watched-pot-never-boils thing.  Yeah, I was pulling out my hair for a while.  I wish I’d known that even though mine didn’t take that long (relative to the publishing business norm), that space between acceptance and publication was going to feel like an eternity.

SW: Patricia Highsmith was a hot topic at the last NoirCon. How does THE WOWZER fit into a world with what she and others – including Jim Thompson – have done in terms of the protagonist’s state of mind?

FW: I heard someone say about James Cagney that all the bad guys he played didn’t know they were bad guys.  I love Highsmith’s work, and her Ripley novels were a big part of my decision to make the character a psychopath.  But to be honest, I didn’t know who Jim Thompson was until I read what Scott Wolven wrote, comparing THE WOWZER to Thompson’s work.  What I like about this type of character is that it’s a kind of day-pass into a world without the constraint of conscience.  You get the experience of doing lots of bad things, and don’t have to feel guilt over it.  And then you get to come back from it.

SW: Why does THE WOWZER have to take place in the Ozarks? Why not Florida? Seattle?

FW: Cause that’s where Jerry’s from , don’t you know nothin’?

I love the Ozarks.  A lot of relatives on my mother’s side lived there, and we’d visit now and then.  Being a flatlander most of my life (Central Texas, Eastern New Mexico, Nebraska), the mountains made quite an impact.  So did the great uncles who showed me what storytelling was.  That was the voice I tried to capture: my uncles from the area, spinning a yarn.

SW: THE WOWZER has been called “a profane, violent, strangely captivating romance.” How is it that a hard-boiled piece of country noir can also have a romance?

FW: Even monsters need love.  Well, some of them, anyway.  That’s what I learned from those old HBO “Iceman” documentaries.  The guy did love his family, but kept that separate from his job as a hitman. That’s in our nature.   We seek companionship and intimacy with others.  Even those who are profoundly detached, they still have that instinct, even if they can’t conventionally, or safely, express it.

SW: Why don’t you have a website? Why aren’t you on Twitter all day? Are you sure you’re a real author?

FW: I’m what you might call a “slow learner” when it comes to computers.  My brother in law, a programmer-genius, is actually helping me develop a website that should be up in the near future.  As for Twitter, see, I have a couple of these things called jobs.  And also a wife I like to spend time with. But I drop in occasionally to shoot my mouth off.

SW: What are you working on next?

FW: I’m in the last stages of revision for a new novel.  It’s set in Nebraska, in a place very like my hometown. If I just call it hardboiled WESTERN noir, then that means it’s hardboiled noir set between 1865 and 1900. So I guess it’s hardboiled CONTEMPORARY western noir. Or whichever sequencing of those words works best.  Maybe I just invented that category.  This novel is actually based on my short story “The Good Life,” which appeared in issue #7 of CrimeFactory magazine.  And I’m also chipping away at  a sequel to THE WOWZER.

I liked "The Good Life" in Crimefactory so I am waiting for the next one.

Will get WOWZER now. Sounds good.

Chuffed to find this. Looks fab.

Halfway through with this from Amazon. Good book.
When is the next one out?