The sun! The heat! No school! Long days with little to do but while away the hours, daydreaming about what shapes the clouds look like, wondering how long until dinner.

Sound like your typical summer? Yeah, not mine either, at least not for the past thirty years. But the summer state of mind is something that I can catch, hang onto, and relish in for the next three months. To go with this light-hearted, sunny, lazy time of the year, my taste in TV, movies, music, and books change. Now is not the time for tomes full of allegory and literary zeal. I just want straight-forward media that is full of action, daring do, and just plain fun. Here are some of the things I'm looking forward to this summer.

The Chase by Clive Cussler - I'm halfway through this first Isaac Bell historical adventure and it's a blast.

Redshirts by John Scalzi - A Star Trek parody/homage. I've read the sample on my iPad and laughed aloud twice. I'm all in.

Railsea by Chine Mieville - "Moby Dick" with railroads and giant moles. Yes, you read that correctly. Coming from Mieville, I trust him that it'll be great. Bonus: his new monthly title from DC, Dial H for Hero.

Captain Blood by Rafael Sabatini - After my SFBC read the disappointing On Stranger Tides, we decided on a more traditional pirate story.

Paragaea by Chris Roberson - Story inspired by the planetary romances of Edgar Rice Burroughs. I am there!

The Twenty-Year Death by Ariel S. Winter - The concept alone is worth a look.

The Passage of Power by Robert Caro - I like to crack a nice history book every summer, usually biographies. This 4th volume, 10 years in the writing, is the one this year. Caro writes some of the most beautiful paragraphs I've ever read. This book is huge, but I don't expect a moment's boredom.

The Dark Knight Rises - It will not be as fun as the Avengers, but I thoroughly expect to be blown away.

Brave - Pixar doesn't make mistakes (their movies are at such a high level that missteps like Cars 2, a decent movie, suffers by comparison) and this one looks incredibly fun.

John Carter (DVD) - Yes, I loved the film. Yes, I'm buying the DVD, Blu-ray. Yes, I will continue to enjoy the film.

Other than my favorite new DC titles (Batman [Court of Owls!], All-Star Western, Frankenstein: Agent of SHADE, Animal Man, Swamp Thing, Action Comics, Aquaman), I found a new title at last week at Houston's Comicpalooza that was unfamiliar to me: Red 5's Atomic Robo. I picked up the Free Comic Book day issue and read the lead tale. Dude! A sentient robot built by Tesla! Talking dinosaurs! Hilarity on every page! I am hooked. And I've got 2-3 years of books I need to read to catch up. 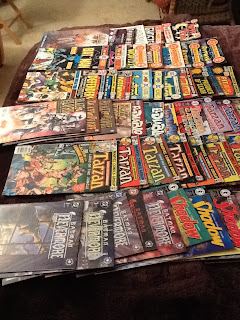 For as much as I love music, I'm oddly at a loss for some new good music coming out this summer. Still digging the new CDs from Esperanza Spalding, Andrew Bird, and Bruce Springsteen from the spring. Other than the new Vijay Iyer Trio CD, any ideas?

I love the self-contained nature of summer. Sandwiched between two holidays, summer is a nice, finite amount of time. It's approximately 90 days, enough time to start something, finish something, or do what needs doing to move the writing forward. I aim to use the summer months to accomplish some great things in my writing. Stay tuned.


How about y'all? What are y'all looking forward to this summer?
Posted by Scott D. Parker at 1:00 AM