My novel OLD GOLD comes out in under a month. You already know this, because I've been mentioning it in every other post since December.

The story takes place in the region where I grew up, in the Black Country of England. It's a region that took it's name from coal mining and industry, so you can imagine how kind the last thirty years have been to the people there.

I'm aware that buying a book by a first-time author can be a bit of a thing. The reader is having to place trust in that writer in a way that they don't have to for an established author, and at hard times like these that's a choice to gamble with your hard-earned money.

I decided to give people a primer. I've had work published online and in print, short stories here and there, and I've been blogging and writing for websites for a few years now, but I wanted to give people something specific to OLD GOLD. 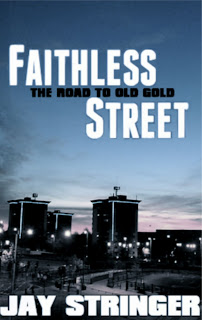 FAITHLESS STREET is a prequel of sorts. It contains four short stories that set the scene for the novel. Each one features a character (or characters) who show up in OLD GOLD. It adds back-story to these people, and fleshes out the world that you'll be walking in if you buy the book. The novel is narrated in first person by Eoin Miller, a particularly mixed up individual, but he only shows up in one of the prequel stories, so it's a chance to get into other peoples heads. Do we trust Miller as a narrator? Well, that's up to you.

In THE DARK KNIGHT, Heath Ledger's Mr J says, "If you're good at something, never do it for free." But that begs the question, how can people judge if you're good at something? People on my mailing list have already had a week to take a look at an ARC version of the collection for free, and now I'm opening it up to you guys. You'll see it's priced at 0.99 at the moment, but from tomorrow until tuesday it will be 0.00 (unless I've set it wrong....) so that everyone out there can share the free.

Why start out straight away with free? Why not try and make some money first? Well again, I want to get this out to people. And, let's be honest, I want people to buy the novel. I figure giving you all a chance to try out my writing for free for a few days now is better than asking you all to buy a whole book just on faith. Try it out, and if you like it, tell other people while it's still free. Let's share the free with as many people as possible.

And one final thing. I've prepared a Spotify playlist. I have to stress that I don't have permission from any of the musicians (although Franz Nicolay kindly allowed me to use his words as the epigraph to the book) so I can't claim this is in any way the official soundtrack album. But it's music that reflects the moods and flavours of the book. Most of it, you could imagine, is the kind of moody guitar music that Eoin Miller would pick, but thrown in there are selections that reflect each of the main characters and the region of the Black Country.

If you don't already, follow me on twitter (@JayStringer) because that's where I'll be announcing when it's gone free tomorrow and when the promotion ends.

If you don't have a kindle but still want in on the free stuff, tweet me before Tuesday and we'll see what we can sort out.
Posted by Jay Stringer at 5:50 AM

Looks good, Jay. Too bad for me, Spotify is not available in Canada yet - I have Rdio. Could you list the sings and I'll put together my own playlist.

Sorting out mcFet's lack of Spotify right now. If anyone else has problems, drop me a line.