The Way Of The Gun 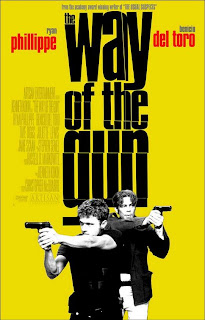 I just re-watched The Way Of The Gun.

I last saw it about ten years ago. I liked it, but I couldn't have given you any reason why. This was also at a time when I thought Reservoir Dogs and Pulp Fiction were the dog's bollocks, and I loved The Usual Suspects.


A decade on, and my tastes are different. In some cases those years have thrown things at me that have changed my world view. In others, I've simply come to expect different things from a crime film. The biggest change, I suppose, is that now I'm a crime writer myself, and I have a more analytical view of story-telling. I can't sit through Reservoir Dogs or Pulp Fiction. I still have a lot of love for The Usual Suspects, but it seems to me that what I like about it is different to what pop culture remembers it for. Despite these changes -or perhaps because of them- I found that I liked The Way Of The Gun far more than before. I can also give reasons.

The main reason? It's a crime film.

It seems to me that we all spend a certain amount of time hiding from that. I've written before about the tourism aspect of crime fiction. The fantasy. We can be guided through some murky waters by a strong protagonist, wrapped up in some witty banter, and escape unharmed. There's a very safe feeling to a lot of crime fiction, which seems to me to defeat the purpose.

Hot off the Oscar winning success of The Usual Suspects, screenwriter Chris McQuarrie thought that all the doors would be opening for him. He was a young writer with a ton of ideas and a little gold statue that said people should listen to them. But nobody did. Hollywood was only interested in his ideas if they came wrapped in a neat little bundle that looked, sounded, and packaged like The Usual Suspects. So if Hollywood was demanding another crime film from him, he decided he would give it to them. All the way.

The film was very much a reaction against the genre fare of it's time. The cameras stepped back and got out of peoples faces. The editing slowed down, the scenes played longer. The violence, when it happened, was nasty and had consequences. Watching it a decade removed from it's context, all of these choices still stand out, but I think rather than feeling reactionary they make the film feel far more timeless than it's contemporaries.

It's not a film without problems, though. McQuarrie makes a few structural choices that cause the film to feel a little too self conscious at first. Rather than committing to it's tone from the outset, he tries to lure the audience in with a bait and switch. It starts out making a play at being the very kind of film that McQuarrie was acting against, with a loud Rolling Stones track, some funny dialogue, and some cool looking characters. We see Benicio Del Toro and Ryan Phillippe, and we know them, they're film stars, so they must be our heroes. Then the 'cool crime film' is interrupted as Del Toro and Phillippe, surrounded by a crowd who are out for their blood, start the fight by punching the two women of the group. They get their assess handed to them and the film has told half of it's story right there- these guys are not nice, but they're what we've got. Also, they may lose, but they'll go down fighting, and they'll find a way to mess you up as they fall. For the next few scenes we have an uncomfortable battle between the two different tones. Some moments commit fully to the bleak realism, while others are still trying to play it cool with some overly stylised dialogue. There's a scene in a sperm-donor clinic that's not as funny as it thinks it is, and then an exposition scene in the waiting room that belongs in a much weaker film. If McQaurrie had been a little more experienced a director, and a little more sure of his voice, he may well have simply committed to the bleak tone from the outset and stuck with it.

Once we get past these early problems though, the film finds it's feet and never looks back. The Way Of The Gun may not be quite the Peckinpah masterpiece that it seems to be aiming for, but we still get a classic crime film that's ageing better than most.

Del Toro and Phillippe play two career criminals who, "for the record," shall be known as 'Mr Longbaugh' and 'Mr Parker.' They hatch a plan that involves kidnapping a pregnant Juliette Lewis to make a quick buck, before finding out that they've picked a fight with the mob. We already know how this goes from seeing them pick a fight with two women in a crowd of men. They're in all the way, there is no going back, and nothing is going to go smoothly.

Something else that probably sailed straight over my head a decade ago is that the film isn't really Longbaugh or Parker's story. They are our way in and out, our framing device, but really it's James Caan's character, Joe Sarno, who is the centre of the tale. To say more than that would be to ruin the story for anyone who hasn't seen it, but I will say his performance is note perfect.

The narrative unfolds as if there was a studio executive at McQuarrie's shoulder while he wrote the script, but every time the exec told him to turn right, he turned left. Each chance to lighten the mood is passed up in favour of making it darker. Each chance to veer the course back into being a hip and cool crime film is ignored in favour of following the rules of cause and effect.

By the time we reach the climactic gun fight, we have found a very different form of tension. This isn't a scene in which we're rooting for good guys against bad guys and hoping someone comes out of it alive, this is a scene in which we're already convinced everyone is fucked and are simply wondering who is going to get hurt the most. If people get shot, they fall down. If someone does a Hollywood stunt jump across the screen, they're going to land hard on broken glass.

I think McQaurrie is returning to directing now with a Lee Child adaptation and then an action film. I'm not sure what I'll get out of his upcoming projects, but i know that in The Way Of The Gun I found an often overlooked classic. It's a shame that the years in between haven't given us more of his films, because I think he would have gone on to do even better. This was very much the project of a young man finding his voice, and I think it could or should have been followed with some stone-wall classics.

Reminder; Jay's debut novel OLD GOLD is available for pre-order now. You can join his mailing list here. He promises to stop talking about these two things -and in third person- someday soon. Or never.
Posted by Jay Stringer at 3:00 AM

Thanks. This has been in my NetFlix queue for quite a while. I just bumped it to Number 1.