Why I decided to publish Mori Obscura by Nik Korpon

I decided to publish the story "Mori Obscura" by Nik Korpon for one simple reason. Because he's from Baltimore and we stick to our own.

Nah, just kidding. But it's great to have someone in Speedloader who knows what Natty Boh is.

Seriously though there were three things that made me love this story: setting, character and an interesting ending.

Nik's story takes place in the claustrophobic confines of an abandoned Baltimore Rowhouse that has been turned in to a shooting gallery. I've seen numbers as high as 16,000 abandoned row houses in Baltimore. The number is probably higher. They are a ubiquitous part of some parts of the city and anyone who has seen The Wire has seen them. 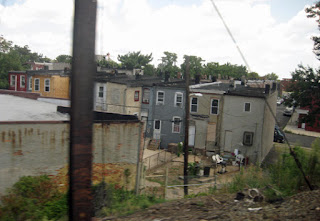 Broken down, dilapidated, forgotten, these buildings scream at anyone who sees them. When boarded up and lacking light they become something more sinister. Nik's writing effectively captures all of this.

Thrown into this hell is our protag. A recovering addict who takes pictures for The Baltimore Sun. He seems like a good guy but truthfully we don't know that much about him. But he is trying hard not to slip into his old ways and and we instinctively support him.

Then he runs into trouble. And that's the meaty dilemma at the heart of the story.

The ending stops right before the protag is to make an important decision. He's at a crossroads really. Nik Korpon stops the story at the perfect place because either option seems like one that the protag would make and the reader ultimately pushes him in one direction or the other.

"Mori Obscura" is a great crime fiction short, with some local Baltimore flavor from one of the rising stars of dark crime fiction. That's why I decided to publish Nik' story in Speedloader (and will be publishing him again, Bar Scars is coming soon).

Currently Reading: Submissions (like you didn't see that one coming) and Young Blood by Sifiso Mzobe

Posted by Brian Lindenmuth at 7:32 AM