SPARROW AND CROWE: THE DEMONIAC OF LOS ANGELES

Our regular reader will know I've been having my issues with comic-books this year. A lot of things have taken the shine off them for me. So it was really fun to find a book that I could simply sit, read, and have a blast with, and that's exactly what I got with SPARROW AND CROWE: THE DEMONIAC OF LOS ANGELES. 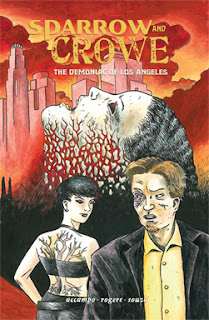 You might remember a while back I posted a link to a kickstarter campaign for a comic book. If you don't remember, just click on this here link and you can then pretend that you did, and I won't tell anybody. The  project in question was a mini-series, and a prequel of sorts to the long running audio-drama Wormwood, that you can still get totally for free at Itunes. But I only mention the connection so that you've got more things to check out; you don;t have to be familiar with the series to pick up the comic.

The story centres around Doctor Xander Crowe, who is an occult detective and also something of a prominent psychologist (just don't let him ask you about your relationship with your father.) He has a haunted past, and a few evil hand issues, but he's out and about in L.A. trying to make a living through exorcism. There would be plenty of easy touchstone references to make here, from John Constantine to Harry Dresden, but with Crowe it feels like the creative team are looking a little deeper and tapping into the same sources that inspired those two characters. There's more Phillip Marlowe in Crow than Constantine. There is something in his characterisation that reminds me specifically of the Marlowe played by Elliot Gould in Altman's The long Goodbye. In that movie Gould played the character as having each foot in a different world; one in the source material and the 40's, the other in the amoral seventies. And Crowe here feels like he's spanning more than one world, floating above the realities of everyday modern life without really managing to commit to them.

The script smartly avoids a lot of the pitfalls that can hamstring new comic writers. Often in a writers early work you'll see too many words on the page, and an inability to get out of the way of the artist. But the writers, Dave Accampo and Jeremy Rogers have recognised this, and the writing is kept tight and sparse, allowing the scenes to flow. There's a level of craft here that's way ahead of where these guys should be, playing with structure enough to fit in a few neat jokes that wouldn't be possible without a strong understanding of how a comic page works. There are a few rough edges here and there, naturally enough, but to be this far into the learning curve already leaves me no doubt that the storytelling will only get stronger as the series progresses.

The art itself is fresh and fun. I've not seen anything from Jared Souza before this project, but again we're looking at someone with a good eye for storytelling. A comic book artist only has 4-8 pictures per page and they need to choose the right still images to create a moving story in your mind. That might sound like stating the obvious, but it's surprising how many artists fail this test. Sure, they can cross hatch, and sketch, and shade, they can capture a photo reference in all it's finer detail, but sometimes they simply can't tell a story. Souza's style bears more of a European -almost Tin Tin- looseness, which draws a clear line between itself and the cleaner house styles of bog companies like Marvel and DC. It's clear and to the point, and it keeps you moving from panel to panel. The finest example of this is the final two pages of the issue, where the scripting, layout and art all combine to perfectly set up and reveal the hook ending. As with the writing, I can't wait to see where Souza's art changes as the series progresses. 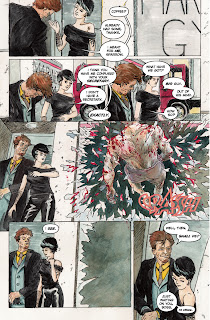 What's the book actually about? Well, that would be telling. But you do get demons, mobsters, jokes to make Rockford proud and more than a little blood.

I'm wary of the way people often pitch independent comics. We're told we should support them because they're independent. I'd rather ask you to support SPARROW & CROWE: THE DEMONIAC OF LOS ANGELES because it's good. Go and pick it up.

Except, wait....here's the catch. The comic comes out in July. It won't be on the shelves yet.

Then why the hell are you telling us this now, Stringer?


The comics market works in what they've called "the direct market." Stores order from a catalogue (Diamond) months in a advance, and from these pre-orders the publishers will work out how many copies to print. (Sometimes the larger publishers will also play a bit crafty, and will base their public sales figures on the number of Diamond pre-orders sold to stores, rather than the number of copies the stores will sell. So when you see a spike in sales around Batman comics every time a movie comes out, often what you're seeing is the spike in educated guesses from retailers rather than customers) But in these harsh times, retailers often pick what they know will sell -costumes and explosions- and skim other parts of the catalogue. So, S&C is in the catalogue right now. The stores will be placing their orders over the next few weeks. If you want to support an interesting comic and good bunch of guys, go into your local store and ask for it. Hell, you can even do their work for them, you can ask them to order item MAY121179 which is in the Hermes Press section.  Job done.