You may have heard that the Pulitzer for Fiction goes to nobody.

Folks, some of the best times we've had together on the internet is when we're arguing about a thing and it expands into all these other things. That's what I'll miss most this year. That's what the Pulitzer people have taken away from me. (By the way, in the 1970s, the board failed to give a fiction award three times.)

Of course, I'm not the only one with a sadz. Pulitzer fiction juror Susan Larson said that she and the two other jurors were wicked pissed [paraphrased] that the Pulitzer board crapped the bed on this one.


Nominated as finalists in this category were: "Train Dreams," by Denis Johnson, a novella about a day laborer in the old American West, bearing witness to terrors and glories with compassionate, heartbreaking calm; "Swamplandia!" by Karen Russell, an adventure tale about an eccentric family adrift in its failing alligator-wrestling theme park, told by a 13-year-old heroine wise beyond her years; and "The Pale King," by the late David Foster Wallace, a posthumously completed novel, animated by grand ambition, that explores boredom and bureaucracy in the American workplace. 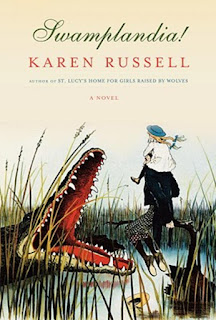 I've read Johnson (Pulitzer finalist in 2008) and DFW, though not those books. Johnson's JESUS' SON is one of the greatest books written and, at 120 pages or so, rivals James Salter's LAST NIGHT in pound-for-pound awesomeness. And, thought I've read probably seven or eight reviews about SWAMPLANDIA! that have convinced me it's a must-read thing of beauty, I haven't gotten around to it. (I hope Karen Russell doesn't not take this personally, because I haven't gotten around to many, many things.)

I was most interested in the selection of the DFW book, if you must know. He hanged himself dead before he finished it. I completely enjoyed his non-fiction (tennis, cruise ships, lobsters), but have never been able to find his fiction as appealing. As an undergraduate, I told a professor that I didn't like some novel or another and he said that my dislike of the book said more about me than it did about the novel. The same probably applies here. The choice of the unfinished and posthumous PALE KING had the feel of one of those awards given late in a career to some actor who made an OK movie last year, but had been shut out for his earlier, much better  movies forty years ago. Or perhaps it was more a James Dean-type Oscar.

Again, I haven't read PALE KING. I've read pieces that appeared in the NEW YORKER. Perhaps the unfinished novel was a fine choice. And perhaps TRAIN DREAMS, though being a novella, was fabulous. The Denis Johnson I've read has been. And perhaps, despite the punctuation in its title, SWAMPLANDIA! was even better than the reviews made it out to be.

We could be discussing books. We could be making lists of "TEN BETTER CHOICES FOR THE PULITZER." We could have been pointing readers to fabulous works they should have heard of, but that the Pulitzer overlooked.

We could, and should, be taking about Bonnie Jo Campbell and Jesmyn Ward and Alan Heathcock and a hundred other authors.

What this non-selection has done is take away the focus on the books, on the reading.

Instead, the decision by the board to award nothing has placed the focus on the emptiness, taking away what could have been a great time for these books, for those of us who love reading.

Perhaps this says less about us and more about the Pulitzers.

It shows unfathomable hubris, to say that, or the thousands of books published in the past year, not one met their lofty standards. Not. One. Nor did any editorial pieces.

it's decisions like this that make it easier all the time for me to ignore awards.

I was upset, because it's so much easier to say "Well, nothing stood out. Too bad" rather than discussing it through and making a choice. Truth is, those three books were probably award worthy, so what's so hard about picking one? DFW would've been more of a "lifetime achievement" winner, but it's better than no winner at all.

Dana, I've never read a book because of an award, but I do think it helps to publicize the work.

Ben, Any of those three woulda been fine, I think.

I dunno, I kind of think it took nuts to select none of them. Maybe none of them are that great. I've not read any of the books in question, so I can't really say. I have made a few attempts to get through some DFW stories and found them unreadable. Maybe the Pale King is better.

It's very possible and highly likely that the true Pulitzer-worthy books weren't included in this list of 3. I would buy that.

I'm not likely to read any of these books, so I'm not care too much.

Woo, hoo! I caught the tail end of a Pulitzer celebration in my very own office!

Without knowing anything about the politics of Pulitzers, at least on the fiction side, I'd say there's at least as good a possibility that the board made an important statement as there is that its members had a grudge against the shortlisted books.

But I your professor's reaction to your long-ago criticism. I wish more people had the passion for books that this post shows.

"Because Murder Is More Fun Away From Home"

Who the fuck cares.

Shouldn't you be blogging about the EBOOK REVOLUTION or how great selfpublishing is or some other bullshit?

Yes, Steve -- it would be nice to be discussing books...