First, thanks to my friend Steve Weddle for letting me loose on DSD today. I promised him I wouldn’t break anything, but that was only to get him to stop hovering. You know how he is.

Actually, you do know how he is, by which I mean kind and generous to fellow writers. He asked me to stop by because my second novel, THE NEXT ONE TO FALL, came out a couple of weeks ago. It’s the follow-up to THE DAMAGE DONE, and it picks up three months after the first book ends. Both novels feature Lily Moore, travel writer and accidental sleuth. I’m on tour now, and one question that keeps coming up at events is about how hard it was for me to pick up from where I’d left off, especially since THE DAMAGE DONE read like a standalone and left Lily in a very dark place at the end.

The truth is, I always intended to write several books about Lily. A big part of the reason why is that I couldn’t imagine putting Lily through the hell she goes through in THE DAMAGE DONE without following up with her later. At the beginning of THE NEXT ONE TO FALL, she’s still shell-shocked and grieving deeply. Her best friend, Jesse, has conned her into coming to Peru with him — since they both work in travel, it’s a business trip for them — and she’s sleepwalking through it, dragging her ghosts after her. At Machu Picchu, she can’t appreciate the beauty of the stone city without thinking about death. When they find a dying woman at the bottom of an Inca staircase, it’s as if the dark thoughts in Lily’s head have taken on a physical form. But later, as she hunts for the woman’s traveling companion, and discovers a trail of dead and missing women behind him, she becomes determined to get justice. 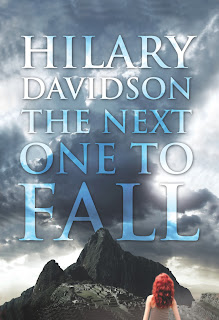 Writing the second book with Lily forced me to confront an ongoing debate about series characters and whether or not they should change. At my first Thrillerfest in 2009, Lee Child made an argument for writing a protagonist who never changes, one who goes from book to book as essentially the same person. He said that readers, when they love a character, just want to see more of that character, not an evolution that changes him.

At the time, I couldn’t have disagreed more. I love series characters who evolve over the course of several books, as Michael Connelly’s Harry Bosch does, and as Spenser in Robert B. Parker’s early novels did. When I think of a character who remains the same from book to book, I think of Nancy Drew.

It was only when I was in the middle of writing THE NEXT ONE TO FALL that I started to reconsider that position. There are so many obvious ways in which Lily changes over the course of that book that I had to stop to consider what hadn’t changed about her. I also wanted to parse out the temporary changes — grief, at the start of the new book, has made her listless and passive, which is entirely unlike the Lily in the first book… and quite unlike the one in the rest of THE NEXT ONE TO FALL, who starts to come back to life as she goes after justice for the dead and missing female victims.

I realized that many of the changes aren’t so much to Lily’s character as to her perspective. When Lily encounters the sister of one of victim, who is hunting for her missing sister in Peru, it breaks her heart on one level, because it reminds her of her own search for her sister. At the same time, this woman drives Lily mad because of her stubbornness and her reckless behavior — not entirely unlike Lily’s own in THE DAMAGE DONE.

In so many ways, Lily is the same. She’s still a woman haunted by her family history, one who has classic Hollywood movies running up against verses by Edgar Allan Poe in her head, one who uses modern technology to listen to Frank Sinatra songs, one who just can’t let things go. The bad-girl side that was suppressed in the first book comes out in the second, but it was always there, lurking beneath her smooth veneer before it cracked. Even her desire for justice, which gets ever more powerful in THE NEXT ONE TO FALL, contains an echo from the first book: Lily didn’t find justice then, so she’s damned sure she’ll get it now.

Get your own copy of THE NEXT ONE TO FALL
Posted by Steve Weddle at 12:25 PM

I guess since I never change, it doesn't bother me that a good series character doesn't either. Not many people go into McDonalds thinking, "I hope they put something different on that burger today..."

Congrats on the book, I look forward to reading it!

The reason I read mysteries is because I like simple things -- a formula I can follow.There's someone you think you can trust but he's a traitor. Or is he? Dun dun dun! I hate to see characters evolve and stories have their own layers because I want the same story over and over. This book with Lily Moore sounds like it might be some kind of non-formula character-evolving book. That is crazy. Whoever heard of such a thing in mysteries. Ha.
Sounds great. I am going to get it today. Thank you.

Characters can grow and evolve but retain their essential core at the same time. And I suppose I agree with Child (whose main character I dislike intensely) that readers will be expecting the same person the next time around.

There are several things to consider when mapping out recurring characters in a series: the story, the reader, and the business of publishing, that is, the expectations of your publisher.

If a series takes place over a long period of time, it would be unrealistic to think the characters wouldn't evolve, after all, in the midst of throwing your characters into any number of unbelieveable dilemmas, it's important to make the people believable to your readers, and we all know - at least people who have lived a while - that people do change, even while they remain the same on many levels.

If on the other hand your series takes place over a shorter span of time, it's easier to deliver that comfort food your loyal readers are expecting when they see your name on the cover.

And without taking too hard a swipe at the business of publishing, if publishers could slap a new cover and title on the same book every time and make money, that's what they'd do. "Series potential" is a staple of any author's pitch these days.

In light of these factors, it behooves an author to brainstorm a six book series arc just to sanity check their concept's series potential. Then, when preparing the outline of that first book, the author can be careful not to give away all of her characters' development in that first installment.

My thanks to Mike, Nick, Steven, and Don for stopping by and commenting!

I think what bothers me about the "no change" camp is that it leaves no room for emotional fallout to affect a character from book to book. I like Steven's point that "Characters can grow and evolve but retain their essential core at the same time." I think that's very true.