Last week I got the latest issue of Banjo Newsletter, which has a fantastic interview with Noam Pikelny (Leftover Salmon, Punch Brothers). 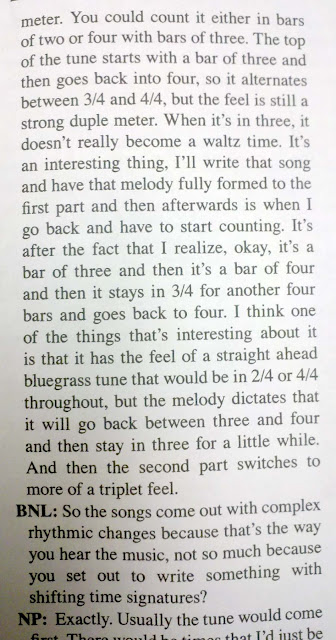 the feel is still a strong duple meter. When it's in three, it doesn't really become a waltz time. It's an interesting thing. I'll write that song and have that melody fully formed to the first part and then afterwards is when I go back and have to start counting.

How like our own writing that is. Well, mine. Maybe yours. He has an idea in his head, follows that then later goes back to start counting.

I find it interesting to consider this when I'm reading a review in the New York Times in which the reviewer seems to find all these connections, perhaps superimposing (it's like imposing, but with a leotard) the reviewer's ideas on the book. Or maybe it's the reviewer seeing various levels in the novel.  You know what I mean? Like when the reviewer will take part of a scene on page 17 and a character's name later in the book and show how it suggests the moral code of the book? Yeah. maybe that's there. And maybe the writer, like Pikelny, gets on a tear and just starts writing out the melody of the scenes and then works in the harmony of each section going along and then afterwards looks back on it and says, "Well, heck. I think this part is in 3/4 and this part is in 4/4. How about that?"

What's telling, at least to me, is the interviewer's question, that the songs "come out with complex rhythmic changes because that's the way you hear the music, not so much because you set out to write something with shifting time signatures."

You see the story, the characters. You follow along with the song you're writing -- whether it's literary fiction or a murder mystery or a short story about aardvarks.

As writers, sometimes we just hang on and see where the writing takes us. The way I describe it is that I'm watching a movie in my head, with characters I've thought up when I wasn't paying attention. At least, when things are working right, that's what happens. But I like the musical idea, too.

How about you folks? You ever get cruising along on a story, only to look back and notice you've "shifted time signatures" in some way?

You don't write like this if you outline. Which you should.

First the complexity and then the structure? I don't think so.

Makes the music and the writing sounds like it's one and the same. Makes sense to me. Good thought.