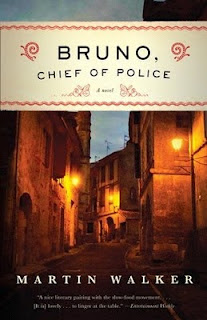 (It's Spring Break and I ain't got anything earth-shattering this week--unless you count my defense of the new "John Carter" movie over on my personal blog. As such, I present a review of a book I quite enjoyed a year or two ago.)

In order to get a good handle on this book, you're going to have to use your imagination. Think of a celebrity chef, one that specializes in French cooking, but not one of those bombastic ones. Now, add a dash of detective, the old-school one from the golden age of the detectives. Not one of those obsessive compulsive detectives like Monk or Peroit, but a newer vintage. Now, set a story in the provincial countryside of France, mix well with a little dash of murder, a lot of good food, and you pretty much have an idea of the character of Martin Walker's Bruno, Chief of Police.

I don't particularly like the word "foodie" but that's the modern term for people who like food, the preparation of food, the discussion of food, and pretty much all things about food. Looks like a duck, walks like a duck, I guess that makes me a duck, or a foodie. So, when I received Walker’s book out of the blue last year from the publisher asking for me to review it, I had no idea who Walker was much less his character. But blurb at the bottom of the trade paperback cover sold me: "a nice literary pairing with the slow-food movement…" That's a quote from Entertainment Weekly, and, to paraphrase "Jerry Maguire," it had me at "slow-food movement."

Benoit Courreges is the chief of police in the small French Village of St. Denis. But to all the people in the village, Courreges is simply Bruno. He lives by himself in a restored farmhouse, he showers outdoors, he walks around the village every day, and the hardest part of his job, as the book opens, is helping all the purveyors of the various traditional French food markets avoid being fined by the European Union's food investigators. Along the way, Bruno extols the virtues of good coffee, good food, where to get the best truffles after the rain, and the languid life of a country policeman.

Enter into this pastoral scene a murder. The victim is an elderly Algerian war hero, who fought for the French in Germany in 1945 and later in Algeria. What makes the murder of Hamid particularly offensive is the swastika carved into his chest. Seeing as he is an immigrant, the local villagers began to suspect that the murder was an ethnic killing. Naturally the politicians see opportunity and descend on St. Denis like ants at a picnic. French-born residents of the village don't like all the attention paid to their small little town, and start to chafe against all the unwanted attention. Naturally, it's up to Bruno and the national police, including one young female policewoman, Isabelle, to solve the murder and avoid any political difficulties. And, since we’re in France, a budding romance blossoms as well with all the shadowed delicacy of Bruno’s former life as a soldier in Bosnia brought to the fore.

Walker is the senior director of the Global Business Policy Council and formally worked for the Guardian of Great Britain. The historian part of me relished all of the intricate details about France during World War II, the deep-seated animosity between the Vichy French and De Gaulle’s group, the immediate post-war period, the Algerian war, and the war in Vietnam before the French left in 1954. The history aspect is a gift, but there is one better: the food. It's a rare day when I can read a book and start a hankering for the food that the characters are eating, but it happened all the time and this book. The descriptions are so good that you can hear the bread crust crunching under your fingers, you can smell the yeasty goodness that only comes from French countryside bread, making your mouth water with lust. He even makes the water—the water!—sound like the sweetest thing you'll ever taste on the Earth.

I’ll say this about the book, though it's not really a criticism, but it has to be noted. The book has a languid pace. If the cover blurb references the slow-food movement, you could almost call this a slow-mystery book. Not a lot happens on the surface, but a lot happens just below the surface. This is a book filled with nuance, and subtle characterizations that I've found very appealing. You go into various online sites—including Audible.com, where I downloaded the audio book—and you'll find comments from some reviewers that state the book was boring. One man's languid is another man's boring. I didn't find the book boring in the least, but, then again, I love food. So during the times when the mystery part of the book stopped, the characters were usually talking about food, something I enjoyed. If you are a reader who doesn't like discussions of French food and its preparation, or if you like your mysteries to possess a more rapid pace, Bruno, Chief of Police might not be the book for you. Rather, if you enjoy all those BBC productions we get here in the States via PBS, glorious descriptions of food, and a character that has enough of a complicated back story that makes me, at least, want to know more, I recommend this book.

You could almost call this a summer book since the story takes place in the summer and the descriptions and actions bring to mind one of those bright, Mediterranean Monet paintings. This book is like a brochure at a travel agency: it makes you want to visit France. You can, with Bruno as your guide. You just can't eat the food.

I had my hand on this book at a used bookstore in Nashville on Friday but they wanted $9 which seemed too high for a used book. Funny how you see it and then you see it again.

A delicious, languid read--the pacing was just right for a book set in small-town France. I'm addicted to Bruno.