Small Thoughts About The Internet

Over the weekend, I saw that cartoon posted on Facebook. It wasn't the cartoon that really caught my attention. It was the comments.

Specifically, the ones who thought it sad that bookstores are now influenced by the internet.

When e-publishing in Amazon started, I was cautious. I was concerned. To that point, I'd never been self-published - although I'd been constantly criticized and treated as though my first novel was. I'd had a contract and been paid, just not by a publisher that met MWA guidelines. And I'm not going to debate that right now. In the end, the publisher sunk, I got my rights back, and have moved on.

But I was nervous about e-publishing, and nervous about trying my hand at it, because I really wasn't interested in going through another round of the criticism I'd experienced before.

And then I watched as the people who'd condemned me for being self-published when I wasn't jumped on board with Smashwords and got in bed with Amazon.

Clearly the times, they were a-changin'.

I still didn't run and jump right on board, but eventually, I regained the rights to my first book and was able to take a novel that had never really been properly distributed and only available in hardcover and make it available as an e-book.

Within the first six months, sales had passed 5000 copies.

I'm not sharing this to suggest that because I can make money online, I champion Amazon over brick and mortar stores. I don't.

But I also don't champion the physical bookstore over the internet.

When I saw the cartoon, and saw the comments, I had one of those moments of clarity. I've really gone back and forth about my feelings about e-publishing. I mean, it's fantastic that I can sell books and earn money and gain readers. SC has proven to have the legs I always believed it could have, and it's proven that the internet allows for the best effect of the long-tail reader, and authors don't have to expect to do the bulk of their sales in the first month. Word of mouth can build and grow and build the audience.

On the other hand, nobody can deny that there's more self-published crap being churned out at an alarming rate because of the ease of producing e-books and self-publishing through options including CreateSpace.

We have to take the bad with the good. That's the way it is with most things.

I love bookstores. Few authors would say otherwise. I love going to browse, a large store, to get lost in the books. I love having a bookstore close by.

However, I don't have an outdated loyalty to them. I grew up in a small town. 9000 or so, with a population in the area that tripled in the summer with all the cottagers, and went even higher on weekends. We didn't have a bookstore. If I wanted to get to a bookstore, I had to get someone to drive me down the highway more than 50 kilometers to a different city that had a small WHSmith in the mall. No, if I wanted books, my best shot was at the library, because I could walk there, but my opportunities to get to a bookstore were limited.

The thing is, as a kid, that puts a limit on what's available to you. As a girl, I had an advantage. The secret readership of YA books is adults, and since more girls read than boys, there's more published that appeals to girls. Publishers aren't as inclined to take the big risks on boy books. That leaves boys slipping through the cracks, without nearly as many options. In a house with literally thousands of books, including hundreds of YA and chapter books, it's almost always the boy who has a harder time finding something that appeals to him.

You may recall the synopsis of the book he decided to write himself from Brian's post last week.

As an author, I've listened to booksellers explain how and why they order titles, and I know that publishers don't promote their whole catalog. They promote their big ticket items they want to push.

And unless you've got an exceptional independent store, like those we know well in our community, or a very exceptional chain with well-informed staff that you can go to, you won't have people making recommendations based on what you really like to read or are looking for. They'll make recommendations based on what they're pushing. I heard these conversations too many times in chain stores, with staff who clearly didn't know anything about the book they were being asked about, other than what was printed on the back cover. Man, I had someone I asked about a crime fiction author try to get me to read Atwood. Now, she's a great writer, but if I'm looking for Allan Guthrie, why would you send me to Margaret Atwood? Could you at least try your hand at someone in the same genre? It's a bit like telling someone looking for a Ken Bruen title to try JRR Tolkein instead.

All too often, particularly in chain stores, I've known more than the person working there.

Here's the good news for the boy, and for those who live in small towns and don't have easy access to bookstores. The internet gives you that access. You're no longer limited by geography. And with two Kindles in our house now, we can have a book downloaded in a matter of minutes and set someone up with a brand-new title.

I've certainly heard people suggest those from small towns have small minds and I've heard critical comments of small-town thinking. Now, the mind of a person is only as small as the world they let themselves have access to, and through the internet we can find the books that interest us and get the titles the local store won't carry. Hell, I lived in a town where the boycott of The Last Temptation of Christ was successful. Now, my options are uncensored.

The internet isn't just a good thing for authors. It's a good thing for readers, and for people in general. I know that there's a cost, I know it gives birth to different crimes and I know that it can be a vicious forum for debate and discussion, and that trying to find intelligent discussion online can be, at times, nearly impossible.

But I can't look at a bookstore and feel sad about the internet. I just can't. I want both, and what the internet can offer me, as a reader, is something I greatly appreciate, especially because of the number of years I spent without easy access to books. Seven days a week, twenty-four hours a day, I can actually get the title I want, in my hands.

Personally, I think that's pretty freakin' amazing as a reader. 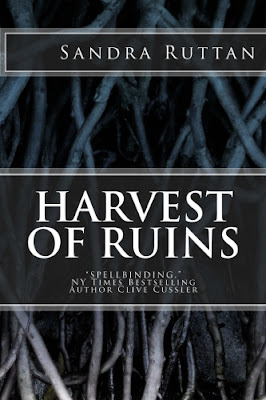 And as an author, I've earned more in the past year than I could have imagined when I decided to try my hand at e-publishing. Suspicious Circumstances is now a few days away from being available via Amazon in trade paperback for the first time, and Harvest of Ruins will also be available in print by the end of this week, for the first time ever.

Those of you who know me know that I can be a champion and enthusiast for the works of others that I love, and am more reluctant to sing my own praises, but Harvest of Ruins is the best book I've written to date, and will be a hard book to top. It's a story that deserves to be told, and deserves to be read, and I hope that with the release of the paperback version it will begin to reach a wider audience.

Thanks to the internet.

And for your amusement, writers and serious readers should enjoy this.
Posted by Sandra Ruttan at 3:07 AM

First, thanks to Do Some Damage for the shout-out for the debut of my mystery novel TAINTED SOULS on Kindle, which I noticed as I was reading your post.

I have mixed feelings about epub and the Internet in general. On the one hand, epub is another option and one that allows new voices a chance to break through that for one reason or another don't make it past the traditional industry's gatekeepers.

On the other, as you note, any idiot with a laptop can now publish a book at virtually no cost. Self-publishing in the past at least had a substantial cost, which acted as a filter.

It's true of the Internet in general, of course. It's a great source of info, but the veracity and worth of much of that info is highly questionable. What constitutes the truth has always been open to interpretation but now is more malleable than ever.