Since Steve was kind enough to hand over the controls to DSD for the day, I thought I'd try my best to quell the urge to start mashing buttons and flipping switches just to find out what they do, and actually talk about what I'm here to talk about. Namely, my debut novel DEAD HARVEST, which dropped just yesterday in the US, and goes worldwide on March 1. DEAD HARVEST is a story of fantastical noir (a term I just made up because "urban fantasy" only kinda sorta fits the bill; it seems to me fantastical noir could just as easily take place in the country), so I figured I'd talk a bit about the hows and whys that led a guy mostly known (by the five-odd folks who've heard of him) for writing straight-up crime fic to pen this particular bit of crossover fare.

Every writer's got their elevator pitch – a punchy line or two encapsulating their latest earth-shattering work of staggering ingenuity they keep at the ready should they happen across an editor, literary agent, or particularly fetching barista in the wild. Mine for DEAD HARVEST is as follows: 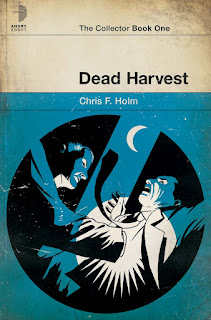 DEAD HARVEST is the first in a series of supernatural thrillers that recasts the battle between heaven and hell as Golden Era crime pulp.

See? Short and to the point. But I'll admit, it does raise a question or two, the most obvious being: "Why the eff would anyone recast the battle between heaven and hell as Golden Era crime pulp?

Well, Strangely Standoffish Hypothetical Interrogator, I suppose I could answer that with your basic Reese's Peanut Butter Cup defense; you know, two great tastes that taste great together? I dig stories about angels and demons. Ditto classic pulp in the vein of Chandler and Hammett. Smoosh 'em both together, and how could you go wrong?

The thing is, as answers go, that one's both glib and wildly incomplete. I mean, I love whiskey, and I love bacon, but we can all agree that bacon whiskey would be terrible, right? (Actually, that doesn't sound half bad. Okay, then: how about steak-flavored iced cream?) Point is, for any flavor combination to really click, both components have got to be complimentary. And if you ask me, religion and old-school pulp are mighty complimentary indeed.

No, wait, Second Hypothetical Vociferous Objector, hear me out! The two have more in common than you might think. The broad strokes, for one: both feature countless tales of murder, betrayal and revenge, as well as lean heavily on the notion of free will as humankind's greatest strength and most dangerous weakness. But digging deeper, one realizes the archetypes of sacred texts provide the foundation upon which the devout build their very conception of morality, and from which skeptics draw to craft their arguments. In short, they're hardwired into our cultural lexicon. It only stands to reason our greatest pulp practitioners employed those archetypes in crafting their lurid, modern takes on the classic morality play.

James Cain's tales of forbidden romance leading to violence, misery, and regret may as well have taken place in Eden. Chandler's cops and criminals were often cut from the same cloth, while Revelations and the Book of Enoch talk of angels and their fallen brethren. Genesis tells the tale of Sodom and Gomorrah; in RED HARVEST (from which I not-so-subtly took my title), Hammett writes of Poisonville. And speaking of Poisonville, while nearly every culture on the planet has their own flood myth of rising waters sent to wash away the wickedness from the world, Hammett's violent cleansing of that corrupt burg came courtesy of his nameless, unflagging Continental Op – but it was no less awesome for it.

And what would any pulp tale be without a decent femme fatale? The Babylonian Talmud first introduced the world to a redheaded, acid-tongued temptress by the name of Lilith, who, in one form or another, has since wreaked havoc in darn near every religious or occult text penned. I'm pretty sure she popped up in THE MALTESE FALCON, too, only then she was known as Brigid O'Shaughnessy.

Lilith shows up in DEAD HARVEST, too. She plays handler to my main character, Sam, a man damned to collect condemned souls for all eternity, and deliver them to hell. Sam's sent to collect the soul of a young girl who's been condemned for brutally slaying her own family, but he comes to believe she's been set up. So he does something no Collector's done before: he disobeys his handler's orders, and sets out to clear his target's name. Soon he's got angels, demons, and half the NYPD on his tail, but that's the least of his worries. Seems if he doesn't sort out the mess he's in, and fast, he may wind up jump-starting the Apocalypse.

So yeah. Sunday School, it ain't (though I'm fairly sure sitting through some Sunday School in my youth probably had a hand in pushing me to write it). And it ain't quite old-school pulp either. But if I've done my job right, it's at least one hell of a ride...

Read an excerpt and purchase.

Thanks for having me, Steve. You'll get those negatives back in the morning post.

Sounds good but I hate to waiting fucking two years for the next book in the series to come out so maybe I will wait until the next one comes out and read them both. But maybe I will just buy this one because it does sound very good to me> I like the sound of the book very much.

Fear not, Jason: Book Two (THE WRONG GOODBYE)hits stores (and ereaders) in October of this year.

I can't wait to read! Your short stories have always knocked my socks off, so I expect no less from this!

Thanks, Steven and Joelle!