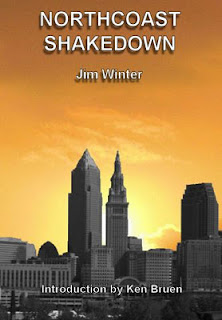 So what is Northcoast Shakedown? Isn’t that some book that came out from some penny-ante Baltimore area press that went under about five minutes before the sequel came out?

In a nutshell, it’s about Nick Kepler, a Cleveland area insurance investigator who’s scored free office space and secretarial help from his former employers at TTG Insurance. We meet Nick actually in the middle of the action with a dead hooker and a rising star in local politics. Always start with a bang, and Sandy Lapinsky’s morning started off with just that. Back up a few days, and we learn Nick’s life would be a lot easier if 1.) he never picked up his phone on the way out to nab a worker comp cheat and 2.) told a TTG exec what he could do with his job reference for a cheating spouse case. From there, it gets complicated.

There’s sex, drugs, some rock and roll in the background, and little bedroom gunplay that doesn’t end well.

Nick was what I saw as one of the first Gen X PI’s. Others came out around the same time, including our own Dave White’s Jackson Donne. Only Dave liked to torture Jackson more than I wanted to torture Nick. I had a multi-book arc in which I send Nick to Hell, then take my sweet time bringing him back. Dave pretty much destroyed Donne in one book and dragged him kicking and screaming back in the second. (I liked that second book quite nicely, actually.)

But one of the things Dave and I used to talk about was our respective settings. Dave wrote in New Brunswick, New Jersey. I, of course, wrote about Cleveland. While Northcoast was in its polishing stage, I paid Dave a visit during a trip to New York City, and we, along with fellow writer Pat Lambe, did the Jackson Donne Tour of New Brunswick.

There’s something about a city that makes this type of story work in a way it doesn’t with other types of fiction. For instance, much is made of how chick lit used to be almost a creature of Manhattan. Come to Cincy during the warm weather. Look me up. I’ll take you to Mt. Adams or Hyde Park on a Sunday morning, and I swear to God, it’s every episode of Sex and the City you never wanted to see.

You could conceivably transplant a PI character from his environs, but it seldom works. I couldn’t watch Eight Million Ways to Die because, the Dude Jeff Bridges may be, when he starts out as an LA County deputy sheriff, the show’s over. Similarly, I tried to like the Robert Mitchum remake of The Big Sleep, but let’s be honest. Philip Marlowe is not an overweight Yank in London pushing sixty. (Didn’t help the movie was done by the same outfit that did Space:1999.)

No, Nick is definitely Cleveland. His is a generation that saw lifetime employment at GM and US Steel and Goodyear slip away before high school. He and his North Coast compadres spent the late eighties and early nineties listening to Led Zeppelin and lusting after Detroit muscle cars from the post-Woodstock era. But of course, those days are gone for him and everyone else. It’s not the city he grew up in, but it has that same gritty, roll-up-your-sleeves vibe you still see in Chicago.

So Nick is a creature of his environment. I toyed with sending him to Chicago or New Orleans, but it wouldn’t work. I love Chicago, and New Orleans holds a lot of promise for good storytelling, but they’re not for Nick.

Unlike his creator, who very nearly moved to Chicago before meeting his lovely bride a few years ago, Nick can never leave Cleveland. Or if he does, the story will be in him going back.
Posted by Dave White at 3:00 AM

As luck would have it, I'm pulling together my order for my Christmas/birthday money today. NORTHCOAST SHAKEDOWN is on it. If I enjoy it even half as much as I liked ROAD RULES, it will be a good investment of time and other people's money.

I've got a character who I've moved to a new location in a story, and it's just not working. I've tried to write this thing about three times, and I'm beginning to think it's because this isn't the place he's supposed to be.