To me, there is freedom within a framework.

Of all the discussions about writing, the one that gets lots of attention is the outline vs. no outline debate. For those who writing without the safety of an outline love the freedom to go wherever. The Outliner group prefers the comfy confines of an outline, knowing exactly how the story will end before they start. As y'all know, I'm an outliner.

What does this have to do with Batman and Boz? Nothing less than the tale of Ebenezer Scrooge. Here in this Christmas season, all the numerous adaptations of Dickens' wonderful ghost story are presented in movie theaters, stages, and our televisions. We all have our favorites whether its with the Muppets, Bill Murray, the Grinch, Jim Carrey, Mickey Mouse, Patrick Stewart, or any of the others out there. The story is the same, no matter the version: Scrooge is visited by Christmas spirits and sees the true meaning of the holiday. From the outset, you know the story. Yet, like a romantic comedy, it's the journey that's the most fun part.

How does this relate to Batman? Well, this year, Lee Bermejo wrote and illustrated Batman: Noel, a take on the Dickens story with the trappings of the Dark Knight. Now, if you are like me, the first thing you do, upon hearing of the concept, is to start thinking about the characters and who would be cast as whom. It's giving nothing away to state that Batman himself is Scrooge. The fun is where the other characters from the DC Universe show up. And, I have to say, Bermejo must have had a lot of fun writing this tale. And have you see his gorgeous art and its hyper-stylized realism? 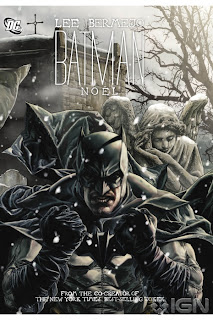 The thing is that when a writer crafts a new take on A Christmas Carol, that writer works within an outline. But just look at the freedom Bermejo had working with this outline. It's the same story, but a completely new take. Heck, I'm even using A Christmas Carol to frame and craft a new Calvin Carter mystery. But, then again, I'm an outline guy anyway.

So, what are you favorite versions of A Christmas Carol? Having seen the production--and additions--from Houston Alley Theater, it is now tops in my book. I also really enjoy Patrick Stewart's one-man version.

I don’t always drink flavored lattes, but when I do, they’re seasonal two-pump gingerbread lattes.

Ever since October started, I've been having numerous pumpkin spice lattes from Starbucks. Haven't given the g-bread a taste. Well, there's today....

Album of the Week: Quatuor Ebene's Fiction. After mentioning them a couple weeks back and then, having only heard one song and a few snippets at the time, I bought the album. Wow. This is a modern string quartet who realizes that good songs come not only from the masters but from Dick Dale, Charlie Chaplin, and Bruce Springsteen. Their gorgeous sound resonates in unique ways, both when they cover popular songs or less well-know pieces. Get this: they cover the Beatles' "Come Together" and, while its true you realize Mozart could not have written it, you also realize how good the song is in a completely different format. Give it a listen and you'll likely be surprised.
Posted by Scott D. Parker at 1:00 AM

So odd. I just bought that CD too.