Let Me Help You Shop

OK. Last week I pointed you to some good books from the year. In case you need some more shopping hints, here you go. 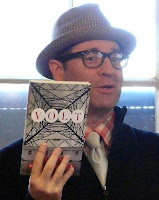 I really dug this one. The story "Lazarus" is my favorite, but they're all top-shelf pieces.

In VOLT, the work of a writer who’s hell-bent on wrenching out whatever beauty this savage world has to offer, Heathcock’s tales of lives set afire light up the sky like signal flares touched off in a moment of desperation. -- from Amazon.com

ONCE UPON A RIVER from Bonnie Jo Campbell

From the National Book Award and National Book Critics Circle Award finalist—an odyssey of a novel about a girl's search for love and identity.

Bonnie Jo Campbell has created an unforgettable heroine in sixteen-year-old Margo Crane, a beauty whose unflinching gaze and uncanny ability with a rifle have not made her life any easier. After the violent death of her father, in which she is complicit, Margo takes to the Stark River in her boat, with only a few supplies and a biography of Annie Oakley, in search of her vanished mother. But the river, Margo's childhood paradise, is a dangerous place for a young woman traveling alone, and she must be strong to survive, using her knowledge of the natural world and her ability to look unsparingly into the hearts of those around her. Her river odyssey through rural Michigan becomes a defining journey, one that leads her beyond self-preservation and to the decision of what price she is willing to pay for her choices. -- from Amazon.com

The first BJC I read was WOMEN AND OTHER ANIMALS, which opens with a great story about an escaped tiger at the circus. Heck, you can't go wrong with Bonnie Jo Campbell's work. Get the new one or get the old ones.

And if you haven't already, go get yourself some SOUTHERN GODS by John Hornor Jacobs. I had my say about it here.

We ended last year over at the DSD Book Club talking about Benjamin Whitmer's fantastic PIKE.

If you haven't read that, you need to get to it. Here

Whether you have or haven't, Whitmer has a new one coming out next year -- the story of Charlie Louvin. Pre-order that one here. More from Mr. Whitmer himself here.

Here's the chat I had with Mr. Whitmer about Pike.

And here's one more "rural noir" offering to get you going: CRIMES IN SOUTHERN INDIANA by Frank Bill. I talked to him about writing here.

Don't forget to pre-order Joelle's upcoming MURDER FOR CHOIR. And speaking of pre-orders: Holm, Davidson, Blackmoore, Christopher, Laukkanen, Wendig. Who else you got?

Oh, and I talked to Lynn Kostoff about LATE RAIN here.

If you'd like to see the podcasts continue next year, let us know.

If you'd like to see the Book Group continue, let us know.
--


Will Hickox is a decorated FBI veteran with a legendary ability to cultivate informants, much closer to retirement than to the days when he earned the nickname “Wild Bill.” Operation Fallout should cut the head off of the Chicago mob and provide a fitting capstone to his career. When Outfit boss Gianni Bevilacqua dies and the resulting war places Fallout in jeopardy, Hickox does what he can to save it, and his retirement plans with his lover, Madeline Kilmak.


Wild Bill examines the stresses of Operation Fallout from the law enforcement, criminal, and personal perspectives, as Will and his peers fight to keep the investigation afloat amid the power struggle between Gianni’s son and elder statesman Frank Ferraro. Torn between wanting closure to the investigation and starting his retirement, Hickox weighs the dangers of involving himself and Operation Fallout in the war, blurring the line he walks with his informants. Wild Bill
Posted by Steve Weddle at 3:00 AM

Thanks. My dad is impossible to shop for. This will help.

Thank you, Steve. This mention is much appreciated.

Thank you for the mention, Steve! Much appreciated. Sheesh, I need it too.

Great suggestions, Steve. I can vouch for the quality of more than half of these myself.

Thanks for the mention, Steve.