Thriller writer Ari Stotle, author of The Poetics Conundrum, The Ethics Hyperbole, and The Metaphysics Gamble, has said that plot is more important than anything – including character.


Tragedy is the imitation of an action; and an action implies personal agents, who necessarily possess certain distinctive qualities both of character and thought; for it is by these that we qualify actions themselves, and these- thought and character- are the two natural causes from which actions spring, and on actions again all success or failure depends. Hence, the Plot is the imitation of the action- for by plot I here mean the arrangement of the incidents.

These “personal agents” can be CIA, FBI, MI6, KGB, what have you. But the agents must have character and thought useful to propelling the action. In this way of thinking, characters serve to move the story forward.

I've read every Dan Brown book except the last one. I think we can consider him a fairly "plot over character" dude.

Let's take a look at a couple you might not know about.

DIGITAL FORTRESS
When the NSA's invincible code-breaking machine encounters a mysterious code it cannot break, the agency calls its head cryptographer, Susan Fletcher, a brilliant, beautiful mathematician. What she uncovers sends shock waves through the corridors of power.

The NSA is being held hostage--not by guns or bombs -- but by a code so complex that if released would cripple U.S. intelligence. Caught in an accelerating tempest of secrecy and lies, Fletcher battles to save the agency she believes in. Betrayed on all sides, she finds herself fighting not only for her country but for her life, and in the end, for the life of the man she loves.

DECEPTION POINT
When a new NASA satellite spots evidence of an astonishingly rare object buried deep in the Arctic ice, the floundering space agency proclaims a much-needed victory...a victory that has profound implications for U.S. space policy and the impending presidential election.  With the Oval Office in the balance, the President dispatches White House Intelligence analyst Rachel Sexton to the Milne Ice Shelf to verify the authenticity of the find. Accompanied by a team of experts, including the charismatic academic Michael Tolland, Rachel uncovers the unthinkable: evidence of scientific trickery -- a bold deception that threatens to plunge the world into controversy.

But before Rachel can contact the President, she and Michael are attacked by a deadly team of assassins controlled by a mysterious power broker who will stop at nothing to hide the truth. Fleeing for their lives in an environment as desolate as it is lethal, their only hope for survival is to find out who is behind this masterful ploy. The truth, they will learn, is the most shocking deception of all.


What we have in these books -- and those like them -- is that some big thing happens and the world is threatened. OK. So what's the thing? The threat? Figure that out.

What's at stake? Is it big? Huge? Great. Make it bigger. And put a ticking clock in there. This big, devastating thing will happen in two days. Unless someone can stop it. So we need a character. Someone who can stop The Thing From Happening. It's a nuclear thing. So we need a nuclear person. A scientist. Yes. But we have to have this person apart from the others. Oh, and make the person a chick. Chicks buy more books than guys. Oh, and make her hot, too. There might be a movie.

OK, so hot chick scientist has to stop The Thing From Happening. Who wants it to happen? Someone who has A Grudge. But why? OK. Let's just put a pin in that and come back to it. No need to slow down on characters. It's like John "I Sold A Million Books On Kindle" Locke said. People don't read his books because he's a great writer. People read them because he can entertain them. So let's entertain them.

We need a love interest for the Hot Chick Scientist. Someone she'll hate at first, but wind up climbing into the shower with on the last page. Maybe it's a rival from another agency. Yeah, that's perfect. OK. This nuclear thingy is discovered and she's a government scientist and he's a corporate scientist. So they're at odds. Conflict. Great. 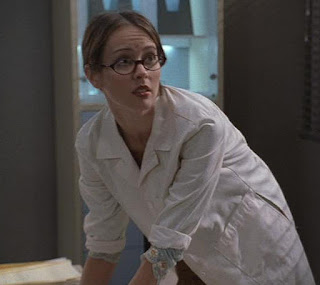 Yes. So there's a discovery at a government lab and she's trying to study it. She tells one of her co-workers. Someone she trusts. About The Implications. It's something that she thinks she can use to heal crippled children. She's talking to her co-worker and he says maybe it could also be used as a weapon, so she needs to keep quiet. Why? Hmmm. Oh, because the lab is at risk of losing its funding and the Man In Charge of the lab has already joined in with BigMegaCorp for the corporation to fund some trials. The public/private partnership. So she decides to keep it quiet. But then the co-worker winds up dead. And the corporate handsome guy comes in to work on the discovery. So the Hot Chick Scientist thinks her co-worker was telling the secret. Then the nuclear discovery thing goes missing. And they have to work together to find the nuclear discovery thing before it destroys the world.

Maybe her father was killed when she was a child. Maybe she freaked out when they led the lambs to the slaughterhouse. Maybe she's afraid of being trapped in a well.

When the USNT’s experimental lab discovers a new nuclear anthodome, Jennifer Cox, the beautiful and brilliant scientist, proceeds with what she thinks may be the cure for cancer. Despite her attempts to keep the news quiet, word reaches her father, Senator Hugh Cox, who uses his influence to bring to the team Juan Miguel Ricardo, a charming, yet arrogant scientist from BigMegaCorp.

Trapped between her father’s presidential election campaign, the proposed dismantling of her expense-ridden agency, and her developing relationship with Juan Miguel, Jennifer plummets into a devastating betrayal as her father is murdered at his home.

Eh, to each his own. I don't get why Adam Sandler still makes movies either.

I read Angels & Demons, which was hilarious. For one, the secret is a mystical... font. That can be read upside down and right side up. Which is described as a lost ancient art, except they had an artist do them for the chapter headings. The bad guy was an arabic rape fetishist. I am not sure if he dined exclusively on puppies and kittens but he may have. And the plot, such as it was, was a flimsy excuse to blow up, drown and bury Catholic priests.
I mean, if you want to poison a monk, do ahead. It worked for Umberto Eco. There was actually a story in there. Brown loves to end each 5 page chapter with cliffhangers reminiscent of the days when the car flew off the cliff, and next week, they showed the clip again, except the hero jumped out at the last minute.

DECEPTION POINT, which I read before Brown became mega-famous, is an example of something that fascinates me: the book with the incredibly stupid premise that an author still pulls off somehow. It is by no means a great book, but for some reason I continued reading it. Even though the premise of this elaborate hoax, which could not possibly ever be sustained in the light of day, was just plain dumb, even dumber as somehow the CIA was involved an it all threatened the president and...well, I don't even remember.

I just can't do that. My plots, such as they are, have to have a modicum of verisimilitude. If I can't keep myself from believing it's plausible, I can't write it.