Nine Tips for Getting In the Mood 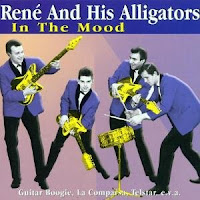 A couple weeks ago, I said I'd send a NEEDLE to one of the commenting people. Congrats to Alan Orloff.

Need to get in the mood to write? Then let's not waste time with the intro crap. Onward and huzzah!!

Dudes and dudettes, I love me some Google StreetViews. Want to write about a rest stop in South Dakota? Here you go: Exit 99, Wall, SD Or how about that pub where a country boy had a few whiskeys just before he met World's Best Agent for the first time. New York

Seeing the buildings, the weather, the way people dress, the cars, the age of junk -- those are great ways to get a feel for the place. Sure, nothing replaces flying to Paris for a month to research your blah, blah, blah. I like to settle in somewhere, let the hemorrhoids get comfortable, and type away.

Some folks like to have complete silence when they write. Some like bustle and hustle noise at the coffee shop. Some like that ambiance music the play on the Chill channel on my XM. I like to get some flavor. There's a disc Frank Bill sent me with a Drive-By Truckers song that put me in exactly the right mood for some stories I was writing. Same thing happened with that Tom Waits song "Hold On." Probably with dozens of other songs. You can listen to that song when you write, and then turn it on later and get right back into the mood.

They did a study in which they make some kids listen to Mozart when studying and some kids listen to nothing. The Mozart kids scored super-high-way-better than the silence kids when they were allowed to take the test to the same music. Seems like when they both took the test in silence, both groups scored about the same. Anyhoo, the idea was that you imprint your brain with the info and music and when you hear the music again, the brain fires off with the rest of the information it was processing at that time.

All I know is whenever  "Decoration Day" comes on, I'm 500 words into a new story by the time it's done.

Remember how you used to print out your stories to see how they looked on paper? When I was writing one of my unpublishable novels, I got to the point where I'd finished draft 20 or so and figured I had to get a fresh look at it. I put together a cover, did some formatting, and had the nice people at Lulu.com print me up a copy and mail it to my house. Honestly, the file looked much different as a book. It was cool. Cost me ten bucks to have this sucker in a book. Let me see things I hadn't noticed. Chapter breaks looked different. Facing pages showed me I was trying the same tricks too often. Anyway, I made some significant changes and ended up with a much better manuscript. And that was the agent-landing book, so I must have done something right.

OK. Now I need six more ideas to make it to nine. Ready? Go.
Posted by Steve Weddle at 3:00 AM

My routine usually involves taking a quick read through the writers' blogs I follow. Doesn't seem to matter what they wrote about that day, or if I'm moved to comment. Knowing everyone is out there, scribing away, seems to get me going.

Cold rainy weather seems to help me. Too bad I live in Kentucky. Maybe I should move to Wales ...

The three on your list, I already use. Sometimes, before I start writing, I"ll read some of what I've already written. Other times, reading another author's novel, will do the trick, and get things kick-started. The old standby is to read a bit of Stephen King's "On Writing". But music is by far the number one on my list.

I had no idea you could have Lulu print out a book for only $10.

i had no idea you could, either. that would be a very handy tool, i'm thinking. :)

CreateSpace also does the same thing.