Practice pitching. That way, when life hands you lemons you'll have good aim and free ammunition.

That's my motto. I never heard it from anyone else, but have scrawled that in countless places, including books I've signed.

It says a lot of about me.

For one, notice I've assumed life will hand you lemons. There's no if or maybe about it. When life hands you lemons. Expect it. Prepare for it.

That says a lot about me. As a kid, I think we had a certain amount of instability in our house, and I felt like I spent all my time waiting for the other shoe to drop. As a result, I really don't like surprises. I like to be prepared, to know what's coming. I will obsess about possible scenarios and outcomes.

Brian will tell you that I talk things out. It's a good thing he's good at tuning me out, or he might have gray hair by now.

Last month was a month that conspired against us. We've been having an ongoing technological issue with Spinetingler that's irritated me greatly. I threatened to wipe the whole site at one point, and that's the least of our drama.

Brian fractured his foot, and almost died*. Okay, before he jumps on here and says I'm being overdramatic about it, you didn't see him. He didn't see him, because he couldn't hop to a mirror. We don't even know how he fractured his foot. Just woke up one morning and could barely walk. And then bad things started to happen. A piece of bone had broken off and caused internal bleeding and by the time we went for medical treatment the infection in his blood was having a field day. He lost 9.2* pounds over the next 24 hours because the medication was that nasty. We had to drive to his parent's house to pick up the kids because this happened smack in the midst of our vacation week, and I had to pull over every half hour or so to let Brian vomit.

I've definitely had better days. So has Brian.

Then we had an earthquake. Some minor damage outside the house, but we were fortunate.

Of course, then we had Hurricane Irene. That was fun. Moving everything inside, filling jugs of water, just in case. We battened down the hatches and braced ourselves.

I won't downplay the storm at all. We caught the edge of it, and still lost power a few times, although the duration was brief. Only a handful of small branches fell in our yard. On the road behind us, and further up the road from us, trees blocked roads, covered lawns, and blocked driveways. 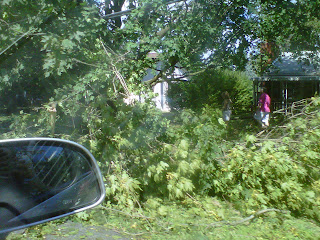 Some of the trees at the park up the road didn't make it. 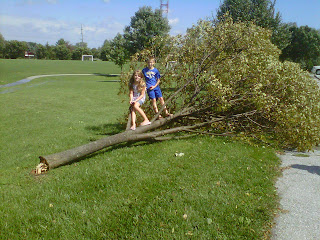 The thing is, if you asked me how my summer was, I'd give you a pretty positive response. Last month was a good month, for a lot of reasons. Just general little things that only matter to me, or my family. Career changes, book sales, personal milestones.

We caught Brian's infection in time, and he's healed, although the limp returns when it's time to talk about mowing the lawn. ;) The earthquake shook us a bit, but not enough to hurt us, just enough to give us something to talk about.

And we were largely spared Irene's wrath. I won't downplay the hurricane for a second. Just a ten minute drive from our home, there were places without power for several days. Although this state was spared the brunt of it, I believe lives were saved by the precautions taken. I don't regret any of the things we did to prepare.

All of these events did get me thinking about writing. A lot of crime fiction is about restoring order after a crime, or settling a score by committing a crime. It's when life pulls the carpet out from under you that you most clearly see the truth about your own character, or the character of others, and that's what makes tragedy a great platform for character development in writing. All too often, I see writers who sidestep a major conflict for obstacle for their character, because they don't know how to resolve it, but it's a shame, because those are ideal opportunities to really define the character and set them apart.

Writers, don't pull your punches. Let them land, and land hard. Show us what your protagonist is really made of.

Challenge: Name a book/character/series where the author really kicks the crap out of them and it makes it a better book.

* Perhaps some slight exaggeration is included in these statements. Slight. But I really couldn't weigh him, so it's anyone's guess, and it doesn't matter because he's regained it all.
Posted by Sandra Ruttan at 3:00 AM

Wow. That's been one hell of a few weeks for you Sandra.

Absolutely love your motto though, as one of life's pessimists. I might have to steal that.

Ray Bans certainly gave Cal Inness a good kicking. And all the better for it,too.

Ree Dolly in Winter's Bone. I kept waiting for her to just tuck her tail between her legs and hide, but she never did.

And I perfectly understand about using those pull the rug moments in your writing. I dumped over 7000 words of a novella I was writing because the ending was just a cop-out. I've now got a novelette, but the ending is so much better - at least to me :)

Stringer, considering what happened to you, I can understand why you're a pessimist. ;)

Paul, yes, Cal Innes is a great example. Ray Banks kicks the crap out of him.

Sandra, that's another great example. And now I'm very curious about the novelette!

I'll go with Lehane and the Patrick and Angie series, only it became a pattern for Lehane to put them through the ringer, and they didn't seem to learn much as a result.

Early on, though, it made for made for more exciting reading.