The Sound of a Human Voice 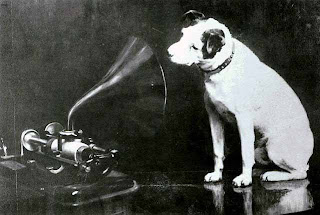 Were I to ask if anyone knew who Nipper the dog was, could y'all answer me correctly?

Frankly, when I started to write this piece, I didn't know the dog's name either. I had to look it up. But I think we all know the image of the white dog, sitting in front of an Edison phonograph, raptly listening to the sound of his master's voice.

Why bring up this dog that's been dead over a century? To let us on the blogosphere know that, sometimes, it's just really good to hear another's voice.

Bouchercon 2011 is going strong up in St. Louis. I had planned to attend, but things conspired against me. Perhaps next year. Nonetheless, we non-attenders are stuck wondering what we're missing. Of all the blogs I follow, many have gone silent. Even the usual Twitter traffic is slower. I wonder why.

Oh, I know. It's because people are talking to other people face to face. What a concept. It's a special type of interaction that, for as awesome a thing as the internet is, you just can't replicate. That point was brought home to me loud and clear--literally--this week.

I've know David Cranmer since 2008. We both jumped on this blogging thing around the same time and, somehow, started commenting on each others posts. Months progressed, emails were exchanged, and we fostered a genuine friendship. But we've never met. And, until this week, we have never spoken.

That changed on Tuesday. David emailed me and basically said, "It's way past time we spoke." Now, as an editor for his Beat to a Pulp webzine, I thought it was going to be a business thing. Even then, however, a smile grew on my face. What would he sound like, being a Mainer and all. Would he think my metropolitan Houston accent just didn't sound Texan enough?

So, he called and I picked up the phone. After a few moments of weirdness when you finally put a voice with the still image on computer screens, we started talking. And talking. And talking. We talked all through the time I prepared dinner and, indeed, all the way up until I had to blast out of my house to get to a jazz band rehearsal. It was almost like two old friends getting together. Which is, in fact, the truth. We are friends. Granted, we've never met, but that doesn't matter. We've worked together on stories, we work together on Beat to a Pulp, and we share common interests. It was a total blast.

As Steve's post on Monday asserted--and the 15 commenters concurred--the personal aspect of this hobby, passion, profession, whatever is very important. It's like Facebook, only, you know, more real.

Comic of the Week: Frankenstein: Agent of SHADE. I am giving all the first issues of DC Comics New 52 a chance. I'll decide later what I'll keep reading on a monthly basis on what titles warrant trade paperback collections. When reading the Flashpoint series this past summer, the Frankenstein part surprised and delighted me. I was not aware that this is Grant Morrison's take on the creature. Frank, an agent of Super Human Advanced Defense Executive, is a warrior charged with combating other monsters that give "regular" humans pause. Love the over-the-top-ness of this title. And his wife! Dude, she's got four arms!

Site of the Week: Brave and the Bold: The Lost Issues. This Batman team-up comic was my favorite growing up. The animated version has thrilled me and made me laugh for three years. This site, run by a person who I can't identify, creates covers that could never exist: Batman and Marvel Girl circa 1960-something, Batman and Man-Wolf from the 1970s, or Batman and John Wayne. He pairs the image of Batman that best suits the co-star and creates covers as if they actually existed. I get a kick out of it every week.

Fun Tweet of the Week:
....and the word of the night is "boobs" apparently. #projectrunway
Posted by Scott D. Parker at 1:00 AM

Email ThisBlogThis!Share to TwitterShare to FacebookShare to Pinterest
Labels: community