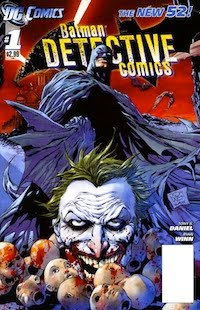 Maybe it’s just an age thing, but I’d like to run something by y’all today.

As a lifelong comic book reader and a DC Comics one in particular, it was with great anticipation that I looked forward to the big re-launch of all 52 titles. Granted, part of me was upset that the renumbering scheme would eliminate the possibility of Action Comics #1,000 or a Detective Comics #1,000, but, if the stories were good, I’d just go with the flow. What was the alternative? Stop reading comics? Not likely.

Last week, DC released only one title, Justice League. With Batman as my favorite character, I enjoyed his prominent place in that book. The first Bat-centric book to be released was this week’s Detective Comics #1. And, in retrospect, the first harbinger of what I experienced when I read this issue was present there on the cover. BTW, to extoll what shocked me, I’ll be giving away the ending of this issue, so SPOILER WARNING in effect.

Artist and scribe Tony S. Daniel draws a good Batman and has since he started a few years ago. Nothing wrong with that. Take note of Joker. See that blood on his face? Yeah, well, that’s not some marketing ploy to get a casual reader to open the cover. That’s part of the story. Joker has always been an insane murderer, it’s just the scope of said proclivities ebbs and flows with the decades. True, a malevolent, maniacal Joker is a horrifying character, but that’s what makes his great.

Here’s where I’ll give you a little insight into me, for context. I don’t have a problem with violence. Some of my favorite action movies—Die Hard 1 and 2, Casino Royale, The Rock, Pulp Fiction—are filled with violence and blood. No big deal. In recent years, however, I’ve become a bit bored with all the graphicness of modern torture-porn movies. Frankly, I just don’t want to see it. Doesn’t mean I don’t appreciate a good bloodfest in the interest of a good story, but I don’t need to see it just because it’s possible to show it. Is that a sign of age? Maybe.

Then there’s Batman. Love the character and love how I learned about him during my life. First, it was the reruns of the old 60s TV show and all of its campy goofiness. Next, was the 1977-era cartoons with Bat-Mite cheesing it up. By 1986, Frank Miller’s Dark Knight showed up as a violent Batman, followed soon thereafter by Alan Moore’s Joker. Once that template was set, the fun Batman mostly disappeared. And it is a shame, too. There should be a place in the world for fun comics and fun superheroes.

In recent years, that role has been filled by the animated series Batman: Brave and the Bold. Here, Bats teams up with just about everybody in the DC universe and fights just about every zany crook out there. It’s filled with one liners, alliterative phrases, and laugh-out-loud moments. It’s a gateway for youngsters to become introduced to superheroes*. And this relaunch is supposed to bring in more readers. But, I’m wouldn’t let them read the current crop of Batman titles.

Back to Detective #1, Joker is here, in all his homicidal glory. Early on, he gleefully stabs some dude, and, while the blood splatters, the more gruesome aspects are blessedly “below” the comic panel. Not so the last page of the issue. Here, Joker has his initial check-in at Arkham Asylum. Here, he meets an unseen person named Dollmaker and it is here where we see the feat that Dollmaker does: cut off Joker’s face and hangs it on a wall.

Yes, you read that correctly. Think the movie “Face/Off” but more grim. It’s a shocking moment, but it’s supposed to be shocking. The adult in me was interested in the direction that writer Daniels might go. Imagine, if you will, a Joker out on the loose that could look like anyone. Darn scary. But another part of me flipped to the cover to see if there was a Mature Content warning I might have missed. Not there.

But it should have been.

So, am I just getting old or has Batman comics (only ones I can speak to at the moment) becoming more violent just because? Is Batman only good as a grim avenger? And, as we commemorate the incredibly violent act that was the September 11th terrorist attacks, are comics (and movies and books) just reflecting our reality?

*Note: Brave and the Bold, in all of its silliness, has been cancelled to…wait for it…make way for a new, darker Batman cartoon.

Apps of the Week: Comixology and NFL 2011. The former so you can read the 52 new titles on the day they are published and made available in comic stores. Huge deal for someone like me who still likes to read comics but not necessarily collect them. Love it. The latter so you can follow your favorite NFL team (Go Texans!) and every other tidbit of NFL news. From what I’ve seen so far, it’s a great app.

I wouldn't say the Batman universe on the whole is any more violent now than it has been for the past 30 years, and there's little these days to match some of the things that were depicted between about 86-95 (Selina written as an S&M hooker, Barbara Gordon shot in the gut and crippled, Robin (2) beaten with a crowbar by the Joker then blown up, Batman's back broken, etc )

The wackier side of Batman has always been more prevalent in other media. The TV show was a send-up of super hero comics, so played up the camp and the comedy. The cartoons of the 70's followed that lead, and the Timm-verse cartoons have given us a few different takes on the bat. The wackier side of Batman was taken out of the comics in the 70's by Denny O'Neil, but Grant Morrison worked a lot of it back in over the past several years. His Batman was a globetrotting superhero.

I think these days -and hopefully more so with the relaunch- there's a Batman for everybody. The two core titles, BATMAN and DETECTIVE COMICS, will play to the characters core values. JUSTICE LEAGUE will give us the world-saving superhero. JUSTICE LEAGE INTERNATIONAL will give us the almost friendly child minder of a bunch of misfits. BATMAN & ROBIN will give us adventures with his son, Damien, so we'll see a more paternal side. The other titles, i have no idea.

On my digital downloads there's a section that gives the recommended age range for the book (most New 52 so far have been 12+). I agree there could maybe be an age category placed on the cover, but at the same time I don't think anyone's going to look at the cover to Detective Comics, with a grim looking batman, a blood red sky, a bloodied Joker and broken dolls heads, and see a kid friendly title.

My issue with Detective Comics wasn't the violence so much as the writing, I didn't think it was very strong, and both the exposition and dialogue were poorly handled.

But these number one issues aren't really about existing readers like me. And feedback I've heard from new readers is that they've really enjoyed Tec. The Batman portrayed in the issue is simply a more two dimensional version of the character they've seen in the movies of the past 20 years, and so is probably a good entry point for adults who are only just dipping their toes in for the first time. And lots of engaged new readers trumps my grumbles about the writing.

Anthony nominations are out