Traveling Through The Dark

So the other day we got a little internet chatter going about some poems.

I was talking to someone about the short piece I wrote for the D*CKED anthology, which should be out any day now. Then I had that nagging oven-left-on feeling. Turns out, William Stafford's poem "Traveling through the Dark" probably had some impact on my story. Here, let me get out of the way for a second.


Traveling through the Dark By William Stafford

Traveling through the dark I found a deer
dead on the edge of the Wilson River road.
It is usually best to roll them into the canyon:
that road is narrow; to swerve might make more dead.

By glow of the tail-light I stumbled back of the car
and stood by the heap, a doe, a recent killing;
she had stiffened already, almost cold.
I dragged her off; she was large in the belly.

My fingers touching her side brought me the reason—
her side was warm; her fawn lay there waiting,
alive, still, never to be born.
Beside that mountain road I hesitated.

The car aimed ahead its lowered parking lights;
under the hood purred the steady engine.
I stood in the glare of the warm exhaust turning red;
around our group I could hear the wilderness listen.

I thought hard for us all—my only swerving—,
then pushed her over the edge into the river.

William Stafford, “Traveling Through the Dark” from The Way It Is: New and Selected Poems (St. Paul, Minn.: Graywolf Press, 1998).

First, let me be perfectly clear here. I realize someone is likely to say, "Weddle, I knew William Stafford. I taught with William Stafford. Weddle, you're no William Stafford." Yeah. I got that. Second, if the estates of these poets I'm going to mention have a problem with my quoting their poems, I'll fix the problem. Third, what the hell was I going on about?

Four of my eleven "followers" on Twitter thought this sounded like a cool poem. And ain't it, though? When I taught college, we'd go over this one for at least a day, talking about the images, the sounds, the rhythm -- all the things that make this exact ending unavoidable. I had a discussion once in which I compared this one to Seamus Heaney's "Mid-Term Break."

Aside from the car accident aspect of each, these poems have a similar build to closing, an inevitable waltz across the cliff's edge. I suppose it wasn't until recently I'd begun to consider these poems in a (forgive me) "noir light." 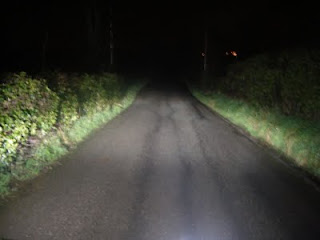 I'd prefer to present a few poems here rather than peel each one apart until nothing remains, if that's all right with you folks.

In the Twitter discussion last week, I mentioned a couple other poems. One has one of the most beautiful, rhythmic openings I've ever encountered in contemporary American poetry.


That year of the cloud, when my marriage failed,
I slept in a chair, by the flagstone hearth,
fighting my sleep,
and one night saw a Hessian soldier
stand at attention there in full
regalia, till his head broke into flames.
-- from "River Road" by Stanley Kunitz

This one, too, builds to something unavoidable, though something more internalized than the other two poems, I think. And this seems key to successful noir. Whether you have mob shoot-outs or back-alley knifings or Cthulu-crawling riverboats, the inner pain has to be of more consequence than the pain to your innards. When the narrator is walking through the woods, cataloging each "mud-puddled nursling" against "the deep litter of the years" then you'd best pay attention.

Andrew Hudgins's poem "Praying Drunk" reminds me of a Raymond Carver short story. Not any story in particular, just the Platonic ideal of Carver story. Maybe someone telling a story at a party where two middle-aged couples are getting drunk around a table.

When I was twelve, I’d ride my bike
out to the dump and shoot the rats. It’s hard
to kill your rats, our Father. You have to use
a hollow point and hit them solidly.
A leg is not enough. The rat won’t pause.
Yeep! Yeep! it screams, and scrabbles, three-legged, back
into the trash, and I would feel a little bad
to kill something that wants to live
more savagely than I do, even if
it’s just a rat.

Noir becomes successful when it fires on a number of cylinders--humor and horror, fear and farce. Seems to me that all these poems succeed because they do what the best noir does -- give you a little hope and then beat punch you in the throat with that hope. I'm thinking in particular of Ray Banks, Christa Faust, Bonnie Jo Campbell, Donald Ray Pollock, John Hornor Jacobs, Dennis Lehane, Lawrence Block, Sarah Grann, and a handful of others. If you're in the mood to cruise around the internet, library or bookstore for poems, you might also check out Anne Sexton, Stephen Dunn, and Laura Kasischke.

Whether you're dealing with the noir fiction on the Noircon tables or the poetry anthologies in the college classroom, there's a similar type of understanding that comes from traveling through the dark.
Posted by Steve Weddle at 3:00 AM

Email ThisBlogThis!Share to TwitterShare to FacebookShare to Pinterest
Labels: Poetry

Loved this post. Glad to see the h/t and return to some great poets/poetry. Why is Larry Levis or Carolyn Forche not here? :)

Seriously though, you made me want to go back and read some of the pieces that punched me in the face and made me fall in love with language.

Made me think of this, which, on the surface seems to have nothing to do with the poems you've quoted.

I know that I shall meet my fate
Somewhere among the clouds above;
Those that I fight I do not hate,
Those that I guard I do not love;
My country is Kiltartan Cross,
My countrymen Kiltartan's poor,
No likely end could bring them loss
Or leave them happier than before.
Nor law, nor duty bade me fight,
Nor public men, nor cheering crowds,
A lonely impulse of delight
Drove to this tumult in the clouds;
I balanced all, brought all to mind,
The years to come seemed waste of breath,
A waste of breath the years behind
In balance with this life, this death.

Maybe it's a kind of existentialism, that travelling through and that inner pain, the way we derive our our meaning or meaninglessness. I don't know. It's just what I thought of.

"...beat punch you in the throat with that hope."

Steve Weddle...taking that tuning fork to the soul.