How do you come up with character names?

How memorable do you want the name to be? Steve? Dave? Jay? John? Scott? Sandra? Or something a little less ordinary. Joelle? Or Russel with just the one "l"?

If your story takes place in 1850s New England, you'll want to dig in a particular place, of course.

I'm working on some stories that take place round about now down in southwest Arkansas and northwest Louisiana. Where I grew up. Where my people are. 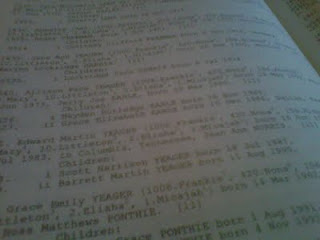 I'm fortunate in many ways, one of those is that I know who my people are. We're talking back centuries. See, Grandpa Micajah was born around 1725. My kinfolk have pieced together a substantial amount of genealogical information.

I have, in my possession, a hardback book of a couple hundred pages of everyone on my mom's side I'm related to. Yeah, pretty much every damn person. From Verdie Holt in Idabel to David Toms on the 18th green. I know that my uncle Aubrey went by "Pete" and that Cleo was called "Preacher." Emma Sue was buried at the Falcon Cemetery and Faye moved off the Bethel and had a mess of young 'uns.

Since the stories I'm writing now take place in this community, I essentially have thousands of character names just waiting for me to use. Averdale. Buck. Delsie. And last names, too. Vandiver. Cates. Lacewell. Most folks would probably come up with some clever way to use all of these names. Maybe they'd create their own random name generator. 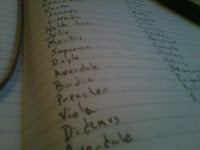 Here's what I did. I wrote down a list of first names in one column and last names in another. Then, when I need a name, I pull from each. Who cuts hair in back of Mr. Womack's? Why, that's Mertis Boushank, it is. What son of a bitch was it that shot Hubert Buckner back in aught-three? Why, that was Obadiah Stokes. And the bitch was Viola Stokes.

This works because I'm working one place and I have a fantastic resource. When I need to pull a name from ye olden dayse, say the 1840s, I just thumb around to some folks who were born around then and I've got some names. Major Hugh. Monroe Jefferson. And then I can pull last names from anywhere in the book or -- more likely -- use the name of whatever family they fit with. I'm not sure I know anyone named Pribble, but in my stories, they're a nasty, brutish lot.

So that's how I came up with names for this latest collection, a set of stories taking place mostly in Columbia County, Arkansas, mostly about now.

How do you come up with your names? Or what are some cool names in stories, the kind of names that seem perfect for the characters?
----------------
GIVEAWAY:
Later today, I'll grab a name from the comments and send that person a copy of SOUTHERN GODS by John Hornor Jacobs. That sound cool?
Posted by Steve Weddle at 3:00 AM

I love coming up with names. It might be the most fun part of writing.

The name of my series PI is Nick Forte. He used to be a musician, and 'forte," aside from being the musical term for "loud, also means "strong" in Italian. For Nick, I just wanted a short name with a hard consonant sound.

My Chicago mob story needed a lot of Italian/Sicilian names, so I opened a map and pulled the sames of Sicilian towns.

The series I'm working on that takes place in a fictionalized version of my home town required pulling out my old high school yearbooks and making lists of names that showed the local ethnic groups.

Names are difficult for me because they're really important. I've been known to come up with a name that goes through several iterations of characters before it settles on someone and becomes a "character." Once the name settles, though, it's set in stone.

For contemporary fiction, I find myself often defaulting to my Scots-Irish-Welsh background, so much so that I try as often as possible to deliberately not go back to that well. Nine times out of 10, though, I just use whatever name occurs to me first, especially for secondary and tertiary characters.

I'm working on a fantasy novel now in which I put together several lists. Characters from one region have last names pulled from a list of tree and plant names, while characters from another region have last names that come from a list of minerals, minus the -ite. Given names are traditional Slavic names in one region, Romanian in another and so on. When putting a name together, I go to random.org and have it generate random numbers for me that correspond to names on the various lists. It's actually quite fun.

The name of one character, I remember, came from the e-mail address of the real person she was based on; her e-mail address sort of resembled a not-uncommon name, and I selected it for the character.

I use name books a lot but often the name just comes to me. He seems like a guy named Sam. Or one named Mildred. A lot of times, I change it by the end because the character is no longer Sam-like.

I do a whole bunch of different things. I use Seattle street names. I use first names or surnames of people I know (but never together, of course). Sometimes I take a real person's name and change the language -- Joe Newport becomes Joe Portnoveau. (I just made that up while doing this in case that's bad French.) Sometimes I do what Kurt Vonnegut said he did -- flip through the phone book until I land on something I like.

Over three thousand names in there.

Facebook is my favorite source of modern day names. When I'm stuck for a name, I just start scrolling up and down the posts looking for names that feel right. I never use first and last names from the same person (unless they have volunteered or I ask first. To me, it is the best use of social media!

I look around my writing room and see what laying around. Then, I'll usually extract a name or two from various author of books, magazines, etc. One character from my Truman was named after the chancellor whose name was on my diploma. My western detective, Calvin Carter, is half named after the comic strip character.

Like Patti, names often come to me. If the characters change and no longer fit their names, I change them.

I don't fuss much over names because I believe a character makes his or her name exciting: James Bond, Lydia Chin, Bill Smith.

Around the time I created C.J. Stone (whose name was just "Siege" to start), I also wrote a story with a character named Jack Charles. I ultimately changed Jack's name to Tom Gregory so readers wouldn't assume a connection between them where there was none. Tom Gregory is named after a friend's brother and cousin but based on someone else entirely.

Back to C.J., "Stone" calls to mind a lot of connotations: cold, hard, dense. I didn't think much about these when I made up the name, but I've tapped into them as I've written the character.

I throw a magnectic letters at my refrigerator and see what it spells.

I'm big on finding names popular in a given region/period and pulling from those. Rings truer to my ear than plucking them from nowhere.

As for recent faves, I just named a hitman in my WIP Leon Leonwood. For those who don't know, that's what the L.L. in L.L. Bean stands for.

Generally I use footballers and musicians. Footballers ate good if I'm writing about a nationality or period that I'm unsure of, because I can look up the national team or a historical team.

For a lot of the stuff set in my hometown, I'm drawing from real people, so I just move the real names around a bit.

At the moment I'm writing a character named after one of my favorite bands, Marah. Works better than the replacements.

I'm with Patti. A name usually just comes but turns out to be not quite right at the end of the story.

I'm working on a couple of stories set on the Big Island of Hawaii, and coming up with names is a gas. Hawaii is such a mix of races and nationalities that I can get away with combinations that would be bizarre anywhere else. Biblical given names are very common, as are Portuguese surnames.

To make things even more fun, I know from experience that a man with a Japanese name, for instance, can look like a cross-country skiier from Norway.

I hate thinking up names, but I think that's mostly because 99% of the time, I don't have a system of how I do it. I just start writing, and when I hit upon having to name a character, I just grab something.

I really like a lot of the methods mentioned in the article, especially because currently I'm working on a book that takes place in a very specific area, so I do want the names to reflect this.

At least I'm not writing fantasy...

Unlike naming children our characters have plenty of time to either grow into their names or pick there own. Like Patti and others, sometimes the name just doesn't fit by the time I reach the end, characters developing attributes that don't really seem very Tom, Dick or Harry like.

Initially though, I play the name game using phone books or registries, pairing first names with surnames. I have to admit to liking the first name Jack or John, seems like a strong name. Of course those are also so so common and that just has me leaping for less common names like Mormon Stanley.

Take a walk in the cemetery. Flip through the white pages. Small town newspapers, too, can cough up some gold.

I have used the white pages on rare occasion, but I also try for names that are somewhat alliterative, like Don Roy Doyle, the central character in my latest novel.

Sometimes, I'll go for a touch of the familiar, like Milton and Bradley, two thugs who try to snatch Doyle off the street.

Another way to find some great character names.....the ones already made up by spammers when they send you dodgy emails selling penis enhancement drugs or offering you millions of dollars for all your personal info.

And the paperback copy of SOUTHERN GODS goes to Dylan in the US of A.

Thanks for the cool discussion, folks.

by Scott D. Parker Well, here we are again. It’s November and tomorrow kicks off National Novel Writing Month. It’s a fun exercise in which ...