2012: Rabbits and the Happy Apocalypse on Shortwave Radio

A Pleasant End of The World Story 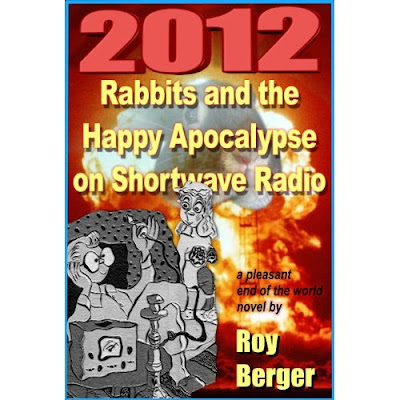 A buddy of mine, Roy Berger, has a new book out on Kindle. It’s not crime fiction, it’s post-apocalyptic – but it is about a guy who owned a bookstore so I figure it's not too much of a stretch to plug it on this blog.

Thre are a lot of post-apocalyptic books out these days but what I really like about Roy’s is the voice. The narrator is clearly going insane and holding on just enough. Sometimes he’s desperate but sometimes he makes jokes. He’s very human.

And there are no zombies.

Roy says, “Within the genre of apocalyptic writing, dismal and dire are often twinned with disaster. I didn't want to write something with people eating babies and drinking sewer water. I was tired of gun blasting zombies and the knights of utter bleak darkness. I wondered if there was such a thing as a Canadian approach? Could it be upbeat? Could it be a whopper of a tale? Could it appeal to the post-modern delinquent man within me? It had to be story driven, never ending. How to bring in contemporary elements, how to cope with science, logic and reason? Could people be influenced to be less dependent? Is there room for a laugh here?”

Here are a few excerpts:

By noon I'd settled on a nice farm. It was a fine white flagstone century farm house with a long gravel driveway. I was attracted to the place in the beginning by its old fashioned independence. The architecture had not gone to waste. The stone walls were straight up. The front door was aligned with magnetic north. The well water was good and the kitchen featured an indoor hand pump. There were a few out buildings and the forest and bush started near by. It was set back from the road and the frontage had a few big trees shading a large pond. I drove the van around to the back. I shouted through a megaphone from the van while approaching the place. The only reaction was a flock of birds that held their breath. I took that castle as my own...

We (him and the dogs) piled in and backed out of the driveway. Shotgun on the dash. Machine gun on the passenger seat. Thirty-two in my side holster. A knife here and there. I was a modern man now. I almost forgot and went back to the living room and picked up a five pound sledge hammer. It was my key to the city. My spear of destiny...

Finally Spring. There was a day in March. I stood on the back veranda feeling a breath of warmth and looked at the blue sky. My throat got stiff. The back of my eyes hurt. I sobbed. I cried. I fell to one knee, holding my gut and crying in great embarrassing sorrow. I stayed that way for a while, rocking back and forth.

In June, no one remembered my birthday, no card, no cake, no present. It didn't matter. I didn't care.

I was in the mood. Time. I stood at the upper bedroom window, felt the handle of the pistol and took aim at the mailbox. I hesitated. The little red flag handle had been down since the last time the owners cleared the box and the mail stopped moving. Certainly since I'd been shooting at it. Now it was different. My trigger finger relaxed. In the last couple of days, since I'd noticed, the flag had been moved to the Up position. That meant mail was delivered. I don't know when the tradition was started. They just did it that way in the rural areas. It was a courtesy so the homeowner didn't have to trek to the roadside on a guess. The rural mail man simply flipped the flag up if he deposited mail and you pushed it back down after retrieving your mail.

I stood there – pistol dangling in my left hand. The other by my side. I flicked my eyes back and forth up and down the road and fields to see if I could observe a bunch of kids playing a practical joke, all giggling in a cluster behind the old crab apple tree. Or maybe the panel falling off a truck and a bunch of glad handing, reality television show executives would come out laughing and hand me a huge fat cheque. I looked around. A squirrel ran halfway up a tree. I looked back at the mail box. If I squinted I could see the white background of something in the box. The flag was still up.


I think this book has an incredibly strong and unique voice. Certainly worth checking out, available for the Kindle here.
Posted by John McFetridge at 3:00 AM

By Jay Stringer We never really know the inside of someone's head. I was at a writer's convention, years ago now. I was in a much w...