An Evening of Mystery and Crime 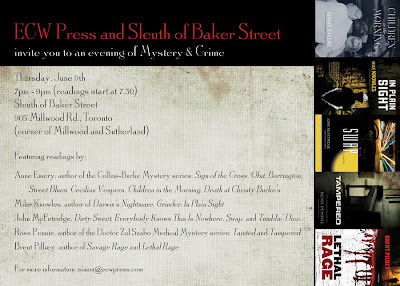 Like the invitation says, ECW Press is hosting an evening of mystery and crime at the new Sleuth of Baker Street Books, 905 Millwood Road, Toronto, tomorrow night at 7:00.

I'm very pleased to be taking part. In fact, ECW asked me to host the event and introduce the other writers (I think because I live the closest and don't seem to be doing much these days).

Longtime readers of DSD (I like to use Declan Burke's line, all three regular readers) will remember Mike Knowles who used to blog here. Mike now has three books published by ECW; Darwin's Nightmare, Grinder and In Plain Sight. Mike has taken some of what Jay was talking about yesterday to heart and doesn't spend much time online. It may not work for everyone, but Mike's books are terrific and intense.

Ross Pennie is a doctor and he's written two medical myseries so far, Tainted, which, if you aren't already scared senseless by the idea of a killer virus you will be, and Tampered which I haven't read yet but I have a feeling will also scare me. Ross has a website:

And Anne Emery is the Arthur Ellis Award Winning author of the Collins-Burke mystery series; Sign of the Cross, Obit, Barrington Street Blues, Vespers, Children in the Morning, and Death at Christy Burke's, so far. Anne's website:

So, if you're anywhere near Toronto it looks to be a great evening. These days with indie bookstore closing all over the place it's great that Sleuth of Baker Street decided to move a few blocks away rather than close down.

And if you can't make it, all these writers are certainly worth checking out.
Posted by John McFetridge at 3:00 AM

Congrats John, and best of luck. Wish I could go and thanks for the head's up on the other writers. Pics and a recap are always welcome.

Wish I could be there. I have SIGN OF THE CROSS on my TBR pile. I bet you're a great MC.

Wish I could be there in person to save you the burden of having to ask, "So, where do you get your ideas?"
==========================
Detectives Beyond Borders
"Because Murder Is More Fun Away From Home"
http://www.detectivesbeyondborders.blogspot.com/

I wish you could be here, too, Peter. But as I was doing my best Rozovsky impression and researching the event I discovered that the writers are all from different professions - a doctor, lawyer, police officer and teacher - I think I'll just say something about how everyone has found a home in the "mystery-crime-thriller genre," and Sleuth of Baker Street is the ideal place to celebrate that.

What do you think?