There’s a story about Margaret Atwood at a party and a man asks her what she does for a living (the most common question asked at parties in Toronto, I’ve discovered) and when she tells him she’s a writer he says he’s a doctor but he’s thinking he may write a book when he retires. Ms. Atwood then tells him, “That’s so funny, I’m thinking of taking up brain surgery when I retire from writing.”

But the truth is those of us who’ve spent years of our lives trying to be writers do have to admit that sometimes people come along with another successful career and write terrific books.

I thought of this last week when I was asked to introduce the writers at the ECW Evening of Crime and Mystery at the Sleuth of Baker Street bookstore and I realized they were all successful in other professions; medical, legal (law and order) and academia (Mike Knowles thanked me for including him in academia and explained that he teaches 8th grade and his class had gone for ice cream that day).

One of the authors was Toronto Police officer Brent Pilkey, reading from his first novel, Lethal Rage.

The book is the story of a young (but not rookie) cop new to Toronto’s downtown, 51 Division as it’s called, and pulls no punches when it comes to the people -- and crime – in the neighbourhood. This is the same neighbourhood in which the TV show I worked on, The Bridge took place, and like that show, Lethal Rage travels to both sides of the metaphoric bridge. As Pilkey says, “You could go from a neighbour dispute in Rosedale where people are arguing about sharing a driveway with a Lexus and a Jaguar, to going downtown and dealing with a homeless person who just overdosed on who knows what.” 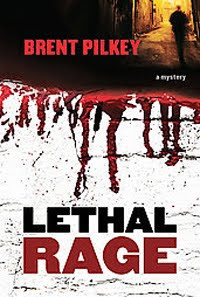 Filled with drugs, prostitution, and crime, this mystery explores the unglamorous life of a street cop in the rough-and-tumble 51 Division. Jack Warren, a young officer who enters the dangerous downtown streets after working in a virtually crime-free area, is immediately thrown into a brutal war against a crack-cocaine dealer intent on taking over the city’s drug trade. Jack soon discovers that no one is safe from the dealer’s quest for domination when the war turns horrifically personal. Working with the division’s elite major-crime unit, Jack learns there is an imperceptible yet enormous difference between the law and justice—and being a police officer and surviving in the 51.

There was a little controversy before the book was published when Constable Pilkey was told that if it was published he would face disciplinary action. At first the police department said, “The staging of locations and events may be viewed by individuals resident in the area as disparaging and disrespectful, including suggestions of differential policing in the area.” But then, as this article points out, the police department decided not to try and stop the publication, “We have to be alert to people's rights -- to people's freedom -- under the law and in this case we believe it was right to reverse the decision and that’s why we did it.”

And the book is certainly full of cops casually referring to the drug dealers and drug users in all kinds of pejorative ways. Ha, look at that, I just used the word pejorative and now I’m going to say that if there’s one thing I have to complain about this book it’s the sometimes too writerly way the prose is composed. Yeah, the cops call people names but the grammar is almost always correct and the narration around that dialogue is always very proper. Maybe that’s the perfect way to get across the real feel of Toronto, this old-time proper city, more Orange than the Orange Lodge, as it was said for years and now with the new grit and grime emerging. The style can leave you a little distanced from the characters on the street and that may be the point.

Or maybe it’s just the sign of a slightly cautious first novel.

Whatever it is, it leaves you wanting more, so luckily the second book in the series, Savage Rage will be out this fall.

One more thing. We've been talking about the new DSD collection, Collateral Damage and I wanted to explain why my story is called Pulp Life - episode one. It has nothing to do with Star Wars.

The story began its life as the pilot script for a TV show I was pitching last year, what I hoped would be a half hour cable comedy-drama like Weeds or Entourage. It's the story of a crime fiction writer helping an ex-con write a memoir.

The first part of the story is up on my blog, here, and I have a couple more episodes in script form which I may also adapt into short stories.
Posted by John McFetridge at 3:00 AM

Asking what people do for a living is the primary party question here in the Washington DC area, as well. Here I think it's so people can decide right quick whether they should feel superior or not. (I'm sure Canadians are too polite for that.) I rarely go out where people don't already know me, but I'm tempted to give false answers when asked what I do. "Play piano in a whorehouse" has a nice ring to it. It might be worth it to see those who asked trying to stifle their expressions.

More often than not, the conversation around here goes like this:

"What do you do for a living?"

I tried to make fun of this a bit in Dirty Sweet when Vince says in Vancouver when people ask what you do they mean do you ski or parasail or go scuba diving and in Toronto they mean what do you do for a living, and Roxanne says, who gives a shit what your hobby is, grow up already.

It's rare, but sometimes when I say I'm a writer people do ask me how much money I make at it, but that does come up more with TV writing.

And I can't wait to see the rest of PULP LIFE in story form.

Topping up your CashBack card is easy, and you have complete control over your money at all times. You can't spend more than you put on the card, so it's easy to budget and you can control your spending. And there's no minimum term contract on the card! 104.246 Video Surveillance cameras for warehouse and storage facilities Most data warehouses are mission-critical, serving in an increasingly mixed workload capacity, including as a data source for online applications. "Deep mining" analysts and business analysts are running complex queries and fast-running tactical queries, each with differing service-level expectations driven by business users, customers and executives of their Company. These differing workloads are all competing for CPU, memory and disk access. At the same time, data latency continues to progress from batch to continuous loading demands.