The Spirit of Fuck That 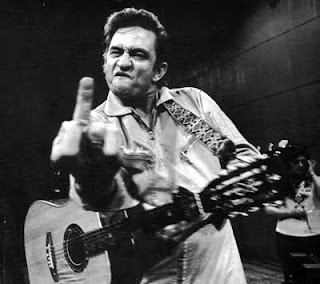 I am writing this on my way home from my New York BEA trip. That may sound vaguely jet-setting, until you hear that I am on the final leg - sat on a dirty train in the West Midlands. The fact is, I forgot about this guest blog slot until now. Yes, it was me who suggested doing it and yes, I should think myself lucky that Russell agreed to step aside for the day. But hey, I'm putting my hands up. What with this and that and the exertions and diversions of travel, and the fact that I was reading Jack Ketchum's OFF SEASON (signed by the man
himself only a couple of days ago - yay!) on the plane, DSD just slipped my mind. But here I am, flagging and jet-lagging and feeling kind of trippy with sleep deprivation, but still writing this.

Is that dedication to the cause or what?

Actually, no, I don't think it is. When I was standing on the station platform back there and I remembered that DSD was depending on me (sort of), it wasn’t some kind of sense of noir duty that made me root my laptop out of my luggage, it was more the whiff of a challenge. Don’t be stupid, I could hear my sensible side saying. You’re exhausted. You haven’t even thought of what you could write. You’re in the Birmingham New Street Station, FFS – the spiritual home of non-inspiration. Face it, Charlie, whatever you come up with for DSD is going to be SHITE. So do the honest thing: tell Russell you can’t possibly do it, then go to bed. OK, Sensible Side, you’ve said your piece. Very eloquent, etc. But do you know what I say?

You heard that right, people. And before you go and defend Captain Sensible, remember this: it was him who tried to

Tell those NASA guys that flying to the moon would be far too dangerous, that they should employ this guy called Kubrick to stage the whole thing instead. It was Capt. Sensible who said to a beleaguered Winston Churchill, “Nice speech, Winst. Not bad for a first draft. But take my advice – leave out the bit about
fighting them on the beaches, eh? You know what Brits are like - one sight of sand and they’ll be pissed out of their minds, sunburnt to fuck and dancing to Agadoo.” It was Capt. Sensible who tried to dissuade Scott when he struck out for the North Pole. And was he right?

OK, so maybe he had a point with Scott, but not in the other cases. No! You know where we’d be if NASA and Churchill had heeded his words? Living in a global Nazi state, that’s where. And with ZERO lunar colonies. Wait...

I’m going off on one here. What I was trying to say, in my unfocused way, was that every writer worth any amount of salt needs to have a bit of that spirit. I don’t like trashing the genre I love, but I’m going to come right out and say that 80% of it is shit. 80%? I’m being optimistic, right? The crime shelves of our bookshops (the ones I go into anyway) are groaning with stuff that often sells well but is just plain bland. Maybe it’s just me. Maybe I’m just the crabby guy who is always looking for what isn’t there any more – something brilliant that will startle me with its style and disposition, while powering me through a story of such noirness that I feel like I’m on a shopping trolley in the Express aisle through hell. I’m imagining the kind of impact that Jim Thompson had on readers who had their eyes open back in the day. Or the outrage that Erskine Caldwell kicked up with Tobacco Road and The Bastard. Both those guys were masters of their craft, but they also had the balls to plough right on
through when they hit the bits that another writer would step back from. And I know I’m not looking for something that’s gone, because every now and then I’ll see it. Commercial success or no, people can still make an impact on this genre. And those people have the Spirit of Fuck That.

Train ride over. I’m home. Time to get my head down.

And rant in my sleep.
Posted by Steve Weddle at 7:38 AM

Why am I not surprised that you'd be drawn to a book called The Bastard?

Because you are drawn to it too, Paul

I like it. And the JC picture is right on.