It means, “the erection of hairs on the skin due to cold, fear or excitement,” according to the dictionary feature of my iPad. I had to look it up as I was reading Stephen King’s Under the Dome . At first it seemed odd that I’d have to look up a fancy word for goosebumps in a Stephen King novel, usually he’s a master at getting across so much with the use of simple, everyday words, but after reading forty or fifty novels of his I don’t mind interrupting one for a trip to the dictionary. I know I’ll be right back to the book.

Most people I know have a Stephen King story about how they were affected by his books. Here’s mine.

It was the late 70’s and I was working as a night shift security guard in an office building in downtown Calgary. There were so many construction cranes in Calgary then people called them the official city bird. Almost everyday someone said, “This will be a great city when it’s finished.” The place was in such a hurry that the office building I worked in wasn’t even finished, half of the fourteen stories were still under construction, but the other half were already in use. All I had to do was sit in the lobby from 11:00 pm to 7:00 am. I had a little desk, a chair and a phone. I guess if someone smashed the windows looking out onto 4th Street S.W. I was supposed to phone someone. And once a night I had to do my rounds; ride the elevator to the top floor, look around and then walk down the stairs, stopping to take a look around on each floor. Simple enough, and even kind of fun. The top couple of floors were finished and I could sit behind the big desk of what I figured must have been the president of the company and look out to the great view of the city and the Rocky Mountains to the west. I really liked the view of the city because there were so many buildings under construction that looked like giant skeletons of buildings. You could see right through one to another.

And the floors that were still under construction were just huge empty rooms with wires coming out of the ceiling and tools and equipment strewn on the floor wherever the workers seemed to drop them at the end of their shifts.

So, of course, for most of the night I just sat at my little desk in the lobby and read books.

One night I started to read The Stand.

A car crashes at a gas station in rural Texas and before I knew it there I was with Larry Underwood crawling over dead bodies and crashed cars trying to make it through the Lincoln Tunnel in the dark.

By the time I took my first look up out of the book it was a couple hours past the time I was supposed to do my rounds so I rushed to the elevator, rode to the top floor, walked down the hall, saw my reflection in the window, freaked out, ran back to the elevator in a panic and got in. But I didn’t push a button so the elevator didn’t move. Then, you know, I laughed at how silly I was for being so scared and pushed the button to open the door and walked back out onto the empty fourteenth floor.

But then I decided the fourteenth floor was probably just fine, and certainly the thirteenth was, too, so I went to the elevator and rode down to the twelfth floor where the elevator doors opened and I stepped out into the shadows of the dark unfinished room – wires hanging form the ceiling, tools scattered on the floor, some kind of scaffolding – and all around the outside walls the windows looked out on a city that had clearly been destroyed. The buildings all looked bombed out, skeletons of buildings, the streets were empty, no cars, no people, nothing.

And there were no sounds, the whole place was silent; the twelfth floor, the building, the city – for all I knew the whole world. I was in the middle of The Stand.

Holy crap, talk about horripiliation – all over my goddam body.

Then behind me the elevator door closed.

And let’s just say I took the stairs back to the lobby. In a bit of a hurry.

I grabbed The Stand and slammed it into the desk drawer and swore I’d never to look at it again.

Of course, a few minutes later I just had to get the book out and start reading it again. I had to know what happened next. 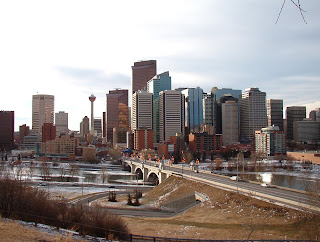 But I never did do rounds of the building again. I got fired a few months later for letting a homeless guy sleep on the couch of the company on the third floor and forgetting about him when I left in the morning, but that’s a different story.

What’s your Stephen King story?
Posted by John McFetridge at 3:01 AM

I was reading The Night Shift one evening while my husband was out of town. I finished one last story -- "The Boogeyman" -- turned off the light, and went to sleep.

Unaware that I'd accidentally shut the cat in the bedroom closet.

Yeah. I still get flashbacks. With horripilation.

My husband was a security guard during college. The one time he had to pull the gun he realized he had it on incorrectly and would have to lower his pants to use it. Needless to say the perp went free. Pretty scary, huh. And there would have been horripilation if he'd lowered the pants.

I was helping my dad do some renovations in an old mill complex and me and my brother had to go down to the cellar to run some phone cables. This was an exact replica of the mill in "Graveyard Shift" and I was scared shitless down there. Everytime I think about my days as a kid, I am reminded of "Stand by Me" aka "The Body". SK captured what it was like to be a kid growing up in a small town better than anthing I have ever read.

I also really liked UTD. SK is not only a great writer, but in UTD, he had me laughing out loud so many times.

Sarah I think I know the exact sound the cat made ;)

Yeah, Sean, I've been laughing in places, too, and sometimes just smiling at really insightful asides he tosses in like they're nothing. Also, the number of local expressions is really quite impressive. In places I wonder if he hung out with my grandmother.

And small world, I also worked with my Dad running phone cables.

1986 - I'd just moved to Columbia, SC. Living alone in a dumpy one-bedroom unit, bedroom windows faced out onto a housing project directly across the street. Sound of gunfire pretty much nightly. For some reason, I chose that time to read THE SHINING. Scared the living crap out of myself.

And have loved Stephen King ever since.