By Jay Stringer
It's been awhile since I preached to you about Scalped. It was way back in 2009. Except that's a big fat lie. I also did it in 2010. And in The DSD podcast. But apart from 2009, 2010 and a 90 minute podcast, I've never raved about Scalped. Except for on the twitters and the facebooks. Maybe a few message boards....
Where was I.....
Oh yeah, Shut up laughing.
I just read volume 7 of the collected editions, Rez Blues, and dammit if it didn't punch a hole in my gut. I really believe we're in the middle of something special here. In 20 years time people will be talking about SCALPED in the same way they talk about WATCHMEN.
And I don't just mean by comparing the beards of the writers. 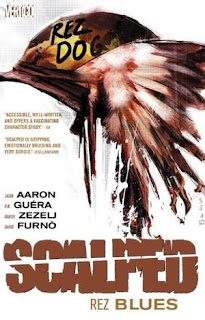 I've recapped the basic premise many times. But just to remind you of the gist; It's set on a fictional Native American reservation in South Dakota. The reservation is under the control of Chef Red Crow, who operates both above and below the table. The secret fly in his ointment is Dashiell Bad Horse, a prodigal son who returns to the reservation with a lot of baggage and a few new secrets.
Dash kinda sorta loves Red crows daughter, Carol. And Carol kinda sorta loves dope. And Red Crow....well...it's never quite clear who or what he loves, but whatever it is he'll kill for it. The other other thing thats clear is that they all hate themselves in some way, and they can't out run that grasp of self loathing.
There is an overall story here, writer Jason Aaron is heading towards a set end point and we're heading into the closing stages of act 2. At this point the book is entering the realms of being a masterclass in serial crime fiction.
You want complex characters and shifting morals? Check. You want sex? Check. You want racial tension, corrupt politicians and some righteous violence? Check check check.
But as all of you already know, those details are nothing if they're not held together by talent, craft and a lot of heart. And that's where Aaron's writing is elevating the book. Between the cracks of all those big plot points is a lot of character and story.
Rez Blues is a perfect example of how this is being achieved. Despite the fact that the book has a huge over arcing story, the latest volume opens with a small character piece that is (so far) unrelated. It tells the tale of an elderly couple, Mance and Hazel. They've fashioned a life together on their farm, each depending on the love and strength of the other. But as age and finances catch up, their lives are falling apart. Mance worries that he has failed his wife, that his farming skills have faded and that he can't provide like a man should. Hazel worries that her illness is a burden on her husband. Neither one ever quite opens up the other, and yet we see the small (and huge) acts of devotion that keep them going. It's a touching and fragile story that shows that love and obligation can sometimes be the same things, and it really tugged on my cold cynical heart.
One of the best scenes has Mance drive into town to ask for food welfare supplies. It's free. He doesn't have to lay down any physical cost to carry out a box full of food for him and his wife. All he has to do is sign his name to a form that says he took the hand out. 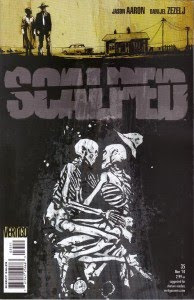 "All I gotta do is sign.
I've fasted for eight days and hung by hooks from a sun dance pole until my flesh tore.
I've killed snakes big enough to eat a baby and reeled in paddlefish the size of small cows. I killed a coyote once with nothing but a pocket knife. I buried my only son and I didn't cry.
But I aint never done anything as hard as this."
And there's a great trick here. Plot wise the story of Mance and Hazel isn't tied into the rest of the book. But if you look at it as a tone poem, it's clear that it's themes and messages are laying the groundwork for what is to follow. The secrets we keep. The small acts of devotion. The obligations that can both bind us together and tear us apart.
Next up we get a nasty little two part story following Shunka, the cruellest, baddest bagman of the series. We see that he has a huge secret in his closet, one that makes him hate himself, and one that makes his every act of daily life a betrayal of who he is. For one brief moment we get to see inside his head, and come away with a shred of empathy for him. Aaron has done this throughout the series; we get to see a character one way, make a judgement, then get a glimpse inside their head that challenges our judgement.
Next up is a look at Bad Horse's father, and the run of bizarre luck that sets up the whole of the series. This is a bold move, adding such important information 38 issues into the story, but it pays off in style.
Something I wrote about way back in 2009 was a trick Aaron used for one scene. He had two characters in bed together in silence, but the reader got to see all the things they wanted to say to each other. There was a whole conversation that didn't happen. In Rez Blues Aaron takes this trick to the next level. The unspoken conversations linger over everyone, and mark crucial turning points in the story. This is the work of a writer at the top of his game. 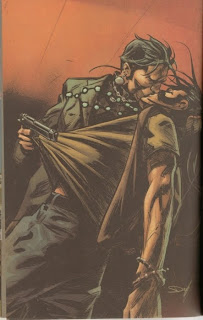 By the time the book makes its way back to the main story arc, our heads are swimming with ideas of love, pride, obligation and addiction, which sets the groundwork for us to be repeatedly kicked in the guts. Dash, Red Crow and Carol circle each other, bound together as much by what they don't say as what they do. And the results are going to make you feel.
As a writer it's natural for me to focus on the writing. I read through SCALPED taking mental notes on the craft, on tricks that Aaron uses that I can take into my own stories and novels. And there are many such lessons here. But I would be remiss to not mention the art.
Usual art duties on the book are handled by the co-creator, R.M Guera. His style is rough and ready, filled with seedy shades of brown and deft use of shadows. His characters aren't just images on a page, they are actors, their faces convey emotions. He takes Aaron's words and grounds them in a world that feels very real, and very desperate.
In and around Guera we get guest artists, such as Danijel Zezelj and Davide Furno, who come in and work on the feel and the world that Guera has created and add their own flavour to it. Each one adds another stitch in the tapestry, and it's all going to add up to one of the finest achievements in crime fiction.
Posted by Jay Stringer at 3:00 AM

Email ThisBlogThis!Share to TwitterShare to FacebookShare to Pinterest
Labels: Scalped

Scott's Note:  James McCrone guest blogs today to talk about an anthology he is part of called Low Down Dirty Vote, Vol.2.  It's edi...