Montreal – City of Ice and Snow and... Oppressive Heat?

What I noticed about all three of those books is that they are set in the winter and there’s a lot of complaining about the cold. Well, I grew up in Montreal and there’s no doubt it’s cold in the winter.

But it’s really hot and unbearably humid in the summer. 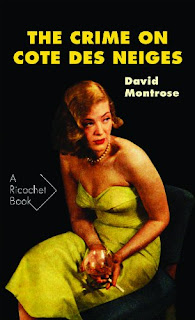 And now a small press, Vehicule, has reissued a couple of Montreal-set private eye novels written in the early 50’s by David Montrose (Charles Ross Graham) and the first one, The Crime on Cote Des Neiges, takes place in August and there’s a lot of complaining about the oppessive heat:

I can safely say that Montreal is that hot in August.

But I wonder why the summer heat doesn’t seem to be what books set in the city now feature? I wonder if David Montrose was writing with the idea that the readers knew the city and that more recent books have been written with an eye to a much larger market (really here we Canadians mean the US market) that doesn’t know the city that well?

When we choose a setting to write about do we just naturally use the features most well-known outside of that setting?

The first fiction I wrote set in Montreal (well, outside of a private eye novel I wrote in the early 80’s that’s safely stored in my basement in a locked safe) used the fact that Jackie Robinson played his first year of otherwise all-white baseball for the Montreal Royals in 1946 – the year before he joined the Dodgers.

But that may be something about Montreal that’s not nearly as well-known outside the city as I thought it was.

Anyway, my story Barbotte has been online for a while and it takes place in the summer in Montreal.
Posted by John McFetridge at 3:00 AM

Email ThisBlogThis!Share to TwitterShare to FacebookShare to Pinterest
Labels: Barbotte, City of Ice, Ice Lake, The Crime on Cote Des Neiges, The Main

"The first fiction I wrote set in Montreal (well, outside of a private eye novel I wrote in the early 80’s that’s safely stored in my basement in a locked safe)"

No, offense, but all I can say about Montreal's summer heat is:

The average high in August is 76 Ferenheit, which is about what I can expect in the Baltimore-Washington area in May (74) or September (79). August here averages 86 with high humidity (ofter 80-90%).

I lived in Atlanta for a few years. Average August highs are 88 and you can see rainwater evaporating off of parking lots when the sun comes out.

Isn't it enough the Canadian dollar is worth $1.02 American? Now you have to be hotter, too?

I was just at Sleuthfest, John, and a friend of mine was there, too. She's originally from Montreal and someone there actually told her not to write any novels set in Canada because "nobody cares" what happens up there.

Needless to say, I sent her a link to your post.

Brian, that's something to think about. Of course, it was so long ago I wrote that book on paper with a typewriter. Now it would be a period piece set in the early 80's, real nostalgia stuff. Could be fun...

Mike, I think it's hard to sell any book so you might as well set it where you want.

John, are you from Montreal? The best way I can describe the weather here, is that it's never comfortable. Or it's too cold, or it's raining/snowing or it's too goddamn hot.

It might have to do with the fact that we all are eskimos. We endure cold pretty well, but heat pretty bad.

Ben, yeah, I'm from Montreal. Until I was sixteen we lived in Greenfield Park on the south shore and then moved to LaSalle. I spent a couple years in Calgary and then back to Montreal - NDG and then downtown until I was thirty and got married and moved to Toronto.

And hey, there are a few days in the fall when Montreal is the most beautiful city in the world with perfect weather ;). And maybe a couple days in June...

Montreal can be brutal in the summer, for sure. The heat and humidity are sheer torture, and easily equal to and NYC summer. Add the winter weather...

I feel like I'm back on the autoroute to Ste. Agathe because my v-word for this post is tolls.

I am John's age, I grew up in Montreal, and can report that, yes, we had hot summers, black flies, Indian summers, summer camps, and, once upon a time, a baseball team.

David Montrose may simply have offered a faithful transcription of a Montreal summer. But he may also have been been having some puckish fun by choosing a summer setting for a place that many readers in certain large markets to the south may have assumed was cold all the time. Jo Nesbo did something similar when he set one of his novels during a sweltering Oslo summer.
==========================
Detectives Beyond Borders
"Because Murder Is More Fun Away From Home"
http://www.detectivesbeyondborders.blogspot.com/

Yeah, I think I would have a real hard time buying into characters complaining about the heat and humidity in Montreal. I live in Florida. When I go for a walk on the beach in January wearing sweatpants and a sweatshirt, the people swimming in the water are Canadians.

But the flipside is also true. Where I'm at, it gets cold enough to kill manatees, but that isn't the first thing that comes to mind when you read the word "Florida." Freshman coming down from the Northeast don't think to bring a jacket or blankets with them for school. Then on their first trip home during the fall semester, they take whatever they can in the way of blankets from mom and dad.

Diana, a book set in Florida that opened amid manatee-killing cold would attract my attention.
==========================
Detectives Beyond Borders
"Because Murder Is More Fun Away From Home"
http://www.detectivesbeyondborders.blogspot.com/

Four seasons, and they mean it.

Please! Don't ever sand off the local edges to meet American expectations about Canada. Or anywhere else.

Now that I'm south of the border, I'm constantly surprised by what Americans, even well-read ones, know -- or think they know -- about Canada.

Someone my writing group told me having a Hispanic doctor in Montreal wasn't very believable. Another one wanted me to explain how a black character came to be living there. Someone else told me it was a stretch having a Jewish character in the same story as the black character. (Mordecai who?)

And of course I just LOVE being told my English is pretty good for someone from Quebec "where they all speak French only and hate the English."

BARBOTTE rocks, folks. Get it now.

Kevin, you must hang around with some dumb Americans. I'll occasionally get asked if I spoeak French, but that's about it.
==================================
Detectives Beyond Borders
"Because Murder Is More Fun Away From Home"
http://www.detectivesbeyondborders.blogspot.com

Beats me. I AM in SoCal, pretty far from Canada, in a relatively Conservative area. Maybe they know more about Mexico.

And I should also point out it's not ALL Americans.

Although once, when I explained that I was from Montreal, someone asked me how long I'd been on the boat. And recently I was asked why our "Queen" didn't just appoint a new president. Because of the recent "coup," you know...

Online Author Interviews at Murder by the Book

by Scott D. Parker Sometimes, washing the dishes can lead to a book purchase. Oh, is that just me? Shrug. It still happened. My wife...