We're not all Watson 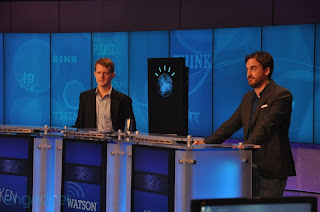 Last night I was watching Watson on Jeopardy.

And between thoughts of it becoming self aware, nuclear annihilation, and begging the audience to PLEASE STOP CLAPPING, I had a thought: This is what politicians want educators and education to become, Data Analyzing Robots.

Listen to the rhetoric those in power are spewing all over the place. Education is failing because of bad teachers who can't get fired. The single most important person in a child's educational life is a teacher. If a student was in a charter school they'd be doing much better. The business model can work for education too.

Children aren't humans going through hormonal issues, growing, and developing into adulthood. They're products. A piece of clay, without thought, to be shaped and molded into productive members of society who can make the people in power more money. If only the teachers could deliver the data necessary to sculpt these children. Look at the test scores, see where they are weak.

And they think that, like that (snaps fingers), a child can be given the information needed and POOF! There's another productive member of society.

As anyone who's been in education--been in a school--can tell you: It's not that easy. Children are people. They aren't well adjusted yet. They have issues. The parents might not be around. The parents might be putting too much pressure on them. Their friends might want them to "be cool." They may have a learning disability. Sometimes, they just don't want to learn.

And these children are not bad. Not at all. They're good kids. They are their own person. They're not robots.

But, because: WE ARE NOT ROBOTS.

From middle school on, teacher may only spend 5 hours a week with a child. There are 168 hours in a week.

A child spends more time with: his friends, his family, his TV, his computer, his X-Box, alone.

Everything has an affect on a child. You can't only blame a teacher when something goes wrong.

You can't only blame a teacher when something goes right.

Everything is involved. Like adults do, children learn things everywhere. A teacher is there to guide them and help them expand their knowledge. Not spoonfeed them data so they can do well on a test.

Teaching is a work of art. It's not an information dump.

So, what's the solution for politicans?

A) Don't put all the blame on teachers. Don't villainize. Be honest, and say you're more concerned about ways to make money and blaming teachers-breaking up public education--will make it easier for you to hold on to your money.

Chris Christie is a political hero right now. He's made teachers the villain and saved the state money. He's repeatedly called teachers* awful and said that NJ education is broken. It isn't. The most recent stats show the graduation rate is first in the nation, test scores are second, and the achievement gap was closing at the highest rate in the nation. But teachers are still damned in this state. Instead of crying foul in New Jersey, we should be promoting our educational excellence.

We're not robots. Neither teachers, nor the kids.

We're never going to reach 100%. We're damn well trying though. Everyone is. So stop throwing around blame and keep pushing what works. And use what works in the areas where it isn't working.

In other news, Steve Weddle, John Hornor, John McFetridge have helped me put together an anthology of my Jackson Donne stories. More Sinned Against is available for your Kindle now.
Posted by Dave White at 3:00 AM

I spent a couple of years in what was universally considered to be a tough high school. What I found was analogous to what Casey Stengel found as a baseball manager: 20% of the kids were no problem and never would be, 20% had to be watched all the time, and the other 60% could go either way, day-to-day. The trick was to keep that middle group more inclined to swing with the "good" 20%.

The overwhelming majority of these kids wanted to learn. The problems for them were many: lack of parental involvement, peer pressure, and, frankly, not learning is less work than learning. A good teacher always looks for ways to keep their attention, because what worked last year-or even last week--might not work today. Different kids, different situation.

Good post. I agree, teaching is an art. And I yhink a lot stems from that. Over my lifetime I've seen art become more and more marginalized - and it wasn't in great shape to begin with.

So art has been replaced by entertainment which is designed to make people feel good and to reinforce what they already believe - what they've already been told.

Teaching is an art and all art has been marginalized and devalued.

You tell 'em, Dave! Most of the people who have all the answers to education have never spent a day in front of a classroom. Put them in there for a week and then let's see how they feel.

Thanks for the post, Dave. My parents were both teachers, and good ones. I never considered teaching for a minute, because I didn't feel like volunteering to take cheap shots from the invincibly ignorant. Things have only become worse since I made that decision.

A truly well-educated person is one not only filled with knowledge ("data") but one who can think critically about that knowledge. Those who want to hoard power don't want people who are able to think critically. Does anyone really think it's a coincidence that for the last three decades the emphasis in education has been on maintaining/improving standardized test scores? Or that a Sarah Palin can become a role model?

The goal of those handling the purse strings isn't to educate. It's to provide generation after generation of unthinking consumers who can be persuaded to do whatever will maintain the status quo.

Amen, Dave! As a middle school teacher in Indiana, we are getting hammered. Watch out for our governor, Mitch Daniels, trying to make a major play at the national level. He is the king of "everything can be run like a business". He is trying to push through new teacher evaluations that rely a lot on how a 14 year old does on a standardized test, because apparently that is how we are judged in every area of life.

Wisconsin is making me ill. The bankers ruin the country and the public employees pay for it. Were we all sleeping when this happened? The new right wing Congress is bought and paid for by the banks. We don't stand a chance.

This is exactly what I think about every day.

I'm a student at the University of Iowa's College of education, and this does not seem like a great time to get into teaching. (I'll be student teaching spring 2012 and on the job market that fall.)

The emphasis placed on standardized testing (and it's link to teacher pay) is insane. And, somehow, there is a single, prevailing opinion (which Chris Christie, Obama, and everyone has endorsed) that mandates the firing of so-called "ineffective" teachers. Nevermind that most of these teachers are working in the toughest districts in the country.

For example, I love how Michelle Rhee was supposed to be the hero--not the teachers in DC schools. As anyone in Teach for America soon finds out, Dangerous Minds is just a fucking movie.

Anyways, this all attempts to create a world of robots, as you aptly put it. Out the window goes any semblance of creativity and higher order thinking.