Too Late For The Reader Revolution?

HOUSEKEEPING: Today we are joined for the first time by our alternate-Mondays blogger, Sandra Ruttan. Most of you already know Sandra as editor-in-chief of Spinetingler Mag and a fantastic writer. Joelle has picked up the opening left by Bryon Quetermous, who retired from DSD a few weeks ago.
The schedule change is that Joelle is now on every Sunday, while Sandra and Steve will alternate on Mondays.
We are so pleased to have Sandra join the team. If you don't know why we're thrilled, you soon will.

I just read the breaking news, that the second-largest city in Libya is in the hands of protesters. Let's see, we've had Tunisia, Jordan, Egypt... and the revolutions continue. Will it be Yemen or Bahrain, or is it possible Libya's Gadhafi will be the next dictator to fall?
The West has been talking about corruption and suppression of human rights in some of these countries for decades, but what came of it? Nothing. No, nothing happens until some young man goes and lights himself on fire, starting a new trend and effectively becoming a champion of democracy throughout the Middle East.
You see, sometimes, it isn't what you say. It's who says it. Those people couldn't hear it from The West. Our interests clouded their ability to appreciate the truth of whatever we said.
No, sometimes, you need to hear from someone you know is on your side.
So, as an author, an editor, a reviewer and a champion of the crime fiction genre, I'm here today to strike a match and start a fire that just might possibly shake the foundations of the publishing industry.
You see, we've heard it from the romance writers. And we've heard it from the, ahem, literary authors. But I stand here today, as one of your own, prepared to embrace a dark truth we've attempted to deny until now because we couldn't accept it from outside our circle.
We can't handle the truth.
Oh, we talk the good talk. Of course we don't want to embrace stereotypes. We want fresh, original, compelling characters that smack of reality...
Right?
Well, maybe. Just as long as we aren't talking about characters from Canada. Check out this map of organized crime from around the globe, and the creators have perpetuated the popular myth that there's no crime in Canada. 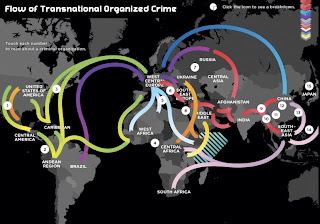 People, this is a devastating lie that's threatening American society. While you picture nice Canadians in Mountie uniforms eating toffee by the fire and singing Kumbaya, the reality couldn't be farther from the truth. On any given day the news is filled with exploding pipelines, escaped murderers, and blood-spattered walls at homicide scenes, and the recent revelation that crime costs Canada an average $1B per year.
The good news is, Canadian crime fiction that features amateur sleuths and quirky characters who accidentally solve crimes is as popular as ever, so someone's sure to draw inspiration from the entirely believable news story about two men in Calgary trying to steal a Zamboni.
Unfortunately, the nicey-nice image Canada has is so pervasive, it's corrupted the crime fiction community. That's why I am going to finally break the news to John McFetridge fans world-wide. The riveting action, the bombs, the drug deals, the murders and general mayhem that fill the pages between the snippets of steamy sex in John's books is getting the ax and John's next book is going to be erotica.
Okay, so this isn't going to shake publishing to its core. I probably won't even succeed in irritating the Canadian Tourism Commission. But I do wonder if I should let go of writing about Canada and embrace my new home in the US.
And I wonder if we can help John come up with a title for his new book. ;)
Posted by Sandra Ruttan at 3:00 AM

Before John McFetridge I didn't even know there was crime in Canada.

and it looks like Australia's got no crime either. just surfers, cricket and Aussie rules.

Thanks Ron! I recommend a film called Frozen River. It stars Melissa Leo (Homicide). It'll make you start to wonder about what's sneaking across the Canada-US border. My own ancestors were related to smugglers in the Prohibition era. There's a long-standing tradition of smuggling between Canada and the US.

Nigel, that's because Aussie's are too busy soaking up the sun, surfing and fighting off sharks to get into trouble. ;) One thing I miss now that I live in the US is the Australian shows I used to get in Canada. Halifax, Water Rats, etc.

Welcome aboard, Sandra, great to have you here.

Yes, erotica. It's funny, last week I was asked to do an interview and one of the questions was about, "sex and violence," in noir.

Violence is violence, it's ugly.

I guess we only put them together because we're scared of both.

The Mounties and the Mounted

Finally, the Buffalo Jills have the voice they've been waiting for!

Frozen Desires or Melting Ice Caps work fine, John. Of course it has to take place in an outdoor stadium so maybe the roof in Toronto collapses from a snowstorm and the featured Bills home game has to be played in Orchard Park after all (think of the international drama ...).

I look forward to it, brother.

I don't know, John. I mean, there are some people I don't think would be very beautiful naked.

And there are moments of violence in fiction that are beautiful. Like when Slim shot Cheese in The Wire. ;)

I don't even know what to say to you Brian.

Charlie, you seem to have a lot of ideas. Maybe you and John should collaborate!

Sandra, I'd love to collaborate with Charlie - I have this idea about a football player from Brroklyn who comes to play in the CFL, there's got to be all kinds of smuggling and crime opportunities. I'd love to set in the 70's when Johnny Rodgers came to play for the Als in Montreal and said he only wanted to be an, "Ordinary Superstar."

I am fortunate enough to have read John's new "Crime Erotica" line and lemme tell ya:
I'll never look at a cross-bow without thinking of that one scene he has involving, well, I don't want to spoil it.

Ha! If anyone could incorporate a cross-bow into erotica, it would be John.

I was hoping Russel could drop by today, but it turns out he's busy with Al in an elevator.

Hellfire, we couldn't get Russel to show up on his own day.

That's because he can't the new Do Some Damage voice recognition software to work.

Brian, I've never read any Michael Slade but I was on a panel with him at a Bloody Words covention in Toronto. It's interesting how "Michael Slade" went from being four lawyers down to one of the originals, now writing with his daughter, who's also a lawyer, I think. There's not much successful "writing by committee" so I find the whole experiment interesting. It's something I think we might see more of now that working online can make collaboration a lot easier.