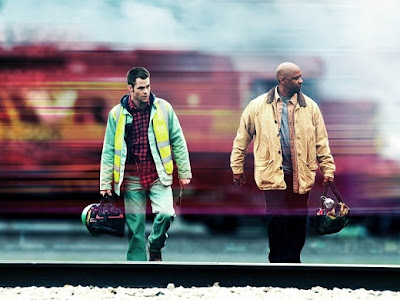 On the weekend the family went to see the movie Unstoppable and enjoyed it quite a bit. Oh sure, you can be cynical about how much it was really “inspired” by a true story and how you just know Denzel Washington is going to save the day and the new Captain Kirk is going to get to talk to his estranged wife again and how it’s a weirdly accurate comparison for Rosario Dawson to make, “A missile the size of the Chrysler Building,” as if we all know off hand how tall every building is – but I decided to go and try to have a good time and I did.

It’s really my kind of movie. I love the characters and the setting, blue collar guys in blue collar towns. There’s a minor character in it, a guy named Ned who’s a welder (“lead welder,” he points out) with a pony tail and a beard and a wallet on a chain and a jean jacket who is just the right amount excited by the idea of a “coaster.” After the movie I said to my wife that Ned, like Winston Churchill, felt his whole life was in preparation for this moment. I’ve worked with a lot of Neds in my life and as annoyingly know-it-all as they can sometimes be, I like them.

So anyway, one commenter on a website, snarky as they often are, said, “But is it Die Hard on a train?!?”

Yeah, everything became, “Die Hard on a... something,” for a while because we can so easily accept the idea that bad guys steal money. And they’ll kill as many people as they need to without a care in order to steal the money. Even if they seem to be spending enough money to live on happily for the rest of their lives while taking this life and death risk to steal the money, we accept it. It’s what bad gus do. And, apparently, there can never be enough money.

But no, this isn’t Die Hard on a train because in Unstoppable there’s no bad guy. No terrorists have taken over the train, no evil corporation’s greed has left the train yard understaffed, no corrupt union has interfered too much. Just a couple of guys are a little lazy, a little overconfident and they make a small mistake. And it gets compounded.

I found the script very well-written, especially in the way the characters were developed and the way it didn’t take any cheap, easy ways out setting up “bad guys,” as easy targets for emotional manipulation. Sure, the new Captain Kirk only has his job because his family includes a few union stewards (Entertainment Weekly magazine referred to his “blue blood family” which is pretty funny when we’re talking about some railway workers in rural Pennsylvania) and the company president has to make a decision that includes taking into account the effects on stock values but neither “side” in this is a Snidely Whiplash, moustache twirling, insane laughing bad guy.

And then this morning there was an article in the newspaper here that really got me thinking about bad guys, and how we create them for fiction and how we decide what they’re going to do in our stories.

The headline is, “Terrorists put psychiatric evaluations to the test.”

Because we can easily accept that Hans Gruber and his “Eurotrash” gang could take over a building (or, yes, a cruise ship or a bus a phone booth or whatever else gets taken over in all those Die Hards on a... somethings) if they are, as Hans said, not just simple thieves, but “Exceptional thieves.”

Really, as long as they’re some kind of thieves, we understand them.

Even if they’re millionaire thieves, we understand they’ll want to risk their lives (and kill a bunch of people) for more money.

But if the “bad guys” aren’t just out to steal money, that puts the psychiatric tests to the test.

The story behind the article is the case of what we in Canada have taken to calling the Toronto 18, a bunch of young men who were plotting a terrorist attack on some institutions in Canada. Apparently the fact that these planned attacks weren’t going to be secretly about extorting millions of dollars and safe passage to Afghanistan has us all stumped.

The article says, “The base rate for this kind of activity is so low, so uncommon, that it’s difficult to hypothesize about how you would predict relapse.”

As if we can ever “predict relapse.”

Back to fiction. It’s really too bad that the phrase, “What’s my motivation,” has become nothing more than a punchline, because a character’s motivations really are important. And it seems that maybe we fall back on the, “I want money,” motivation too easily.

Interestingly there’s another article in the same paper today about the UK government looking to somehow measure well-being, so that they can have a “greater focus on well-being rather than wealth.”

So maybe we are starting to look a little deeper t our relationship to money and how big a motivator it really is. Maybe we need to to do that with our fiction as well.

Unless, of course, you’re Bobby Fuller and you can say it as great as, “I needed money because I had none, I fought the law and the law won.”

Interesting piece, John. Sounds like a top film. A flawed bady guy is always, to my mind, more interesting than a flawed good guy. More pain, you know. And as for the 'happy index' over here in Old Blighty, if it's anything out of this government it would only be about how they can save money - no spiritually enlightened policy here, my friend. Just eighteen millionaires in a cabinet thinking up better ways to fleece the public without them even realising. High up on the happy index of life, then perhaps we can make them pay more tax, take away their jobs, shit on them from a great height, and they won't even notice. Too happy, see.

Oy vey, I work in the Chrysler Building ... I know we're not supposed to like the Die Hards (or the Steig Larsson books, for that matter) ... so long as there is some element of reality/possibility, I usually give the nod and take a look-see. Whereas with Iron Man, etc., no way, Jose. I can't make myself watch supernatural/sci fi types of movies.

In the meantime, How 'bout those Buffalo Bills! Finalmentamia! Now watch us blow the #1 draft pick and win a few more games ...

I am very interested in this one after your review. I have seen so many bad movies lately, I need a decent one.
Charlie-after Sunday, we deserve the number one draft pick, so I hope you win a few more.

Eh, the number one pick can be more trouble than he's worth, all that added hoopla and drama. Of course, that was a headline I saw, "Bills take step closer to losing number one pick." Might have been meant as comedy...

A movie without a bad guy?

I like books in which you can understand why the bad guy does what he does. Not that he was molested by a nun at a carnival so that explains why he's robbing banks. I mean that the bad guy's way makes sense. And so does the good guy's way. This has to be more complex and thought-out of course, which might be why we, in our culture, don't, wait, what was I saying? Ohhhh, shiny. brb

John, thanks for putting that great video of Bobby Fuller singing I FOUGHT THE LAW live, no less, not synched.