Young Junius, You Ordered Yours?

By Jay Stringer
In the final week of Russel's epic quest to retrace the steps of the Littlest Hobo we take the chance to talk a bit of Seth Harwood.
Seth has a new book just waiting for you clickety-click on the 'pre-order' button. It's called Young Junius, and if you've been anywhere near the twitters or the blogosphere you might have seen some of the really cool things that Seth's been doing to get the word out.
So today we have a couple of different things going on. First, we're getting to throw some links at you, tell you about the book and where you can get your hands on it. Second, and this is something that really interests me about Seth, I wanted to take a look at the work he does to get his books out there. 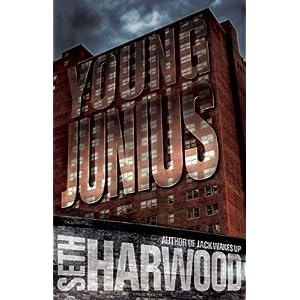 First up let's take a look at the book itself. If you've read Seth's first book, Jack Wakes Up, you'll remember the character Junius. What we get here is what the movie biz would probably call a prequel, delving back into the character's past, but that doesn't really do the book justice. What we have here is a stand-alone story. If you've read Jack Wakes Up then great, if you haven't then Young Junius will still be a full story on it's own. The book is set back in 1987, and is a really cool urban crime story. If you like Richard Price or The Wire this is a book you'll want to check out. Here's the official bit;
In 1987, fourteen-year-old Junius Posey sets out on the cold Cambridge (Mass.) streets to find his brother’s killer in a cluster of low-income housing towers—prime drug-dealing territory. After committing a murder to protect his friend, he finds himself without protection from retribution. His mother gives him fifty dollars and instructions to run, but Junius refuses to live a life in hiding. Instead, shocked by the violence he’s created and determined to see its consequences, he returns to the towers to complete his original mission
There is a special edition of the book that's already winging it's way to the folks who pre-ordered it. It's a lovely edition, and you can see Seth showing it off here;

It was a really interesting way to launch a book, giving fans a chance to sign up in advance for a limited edition that, in turn, would help the publisher getting the book off the ground. If you really want to see what an author can do to break new ground and adapt to the modern market, you need to be keeping an eye on our boy.

The full release is coming soon, and here's some linkage again to where you can pre-order the book. You can follow that link, or you could head on over to Seth's website for a more detailed list of sites, but we would also recommend you head into your local store and ask them to order it. See, this is the thing, if you pre-order online then that's cool and all, each order helps push a book u the rankings and get noticed. But if you ask a store to order it in, then they might order in a couple extra. That means that some browser can actually pick up the book, they can read a bit of it, experience it first hand and buy it. How many great authors have you discovered that way?
So that's the book, and that's where you can get it. Go ahead, I'll wait right here. We'll carry on when you get back.
Honest.
Done? Cool. Okay, here's the deal. I said above that Seth is really out of the cutting edge when it comes to this sort of thing. I've talked before on DSD about authors publicising themselves. Each author has to find their own way, their own level. But I'm fascinated by the path that Seth has marked out for himself.
It started back with his first book, Jack Wakes Up. The content was available online long before the print edition. Seth himself podcasted the chapters, giving you free regular content back before the rest of us were taking podcasting seriously. He also made his book available as a pdf download. And you know what? It didn't destroy publishing. I'm not going to really get into the deeper issues at play there, because I don't want to distract from the matter at hand, but Seth really proved something there.
There's also a lot to be said for the way this brings fans into the process. You are a part of the action. You promote the books, you spread the word. In the case of Young Junius you helped facilitate the publication. If you head on over to his site, or to itunes, you'll see there is Junius content there for you to listen to. We can even give you this really cool link to the story itself. Right now. Click it and see. And it's all in the name of getting you guys in on the fun. It makes it into an active process rather than a passive one, and that is probably the real lesson.
Not every writer can be a Seth Harwood, but we can probably all take something from that element. Make people feel involved. Make them have a reason to root for your book.
Seth will be joining us at DSD towers for an episode of the podcast real soon, and we'll have more news for you in future about how you can win a copy of Young Junius right here. But let's keep this interactive process going. What questions would you like put to Seth? What do you want to hear us talk about?
Posted by Jay Stringer at 3:00 AM

I got the limited edition copy on my desk right now. Monday was supposed to be the official release, but I guess Amazon didn't get their stock until today. I did pre-order a copy and am giving it away on my blog.

It's a great book. Lots of changes made since the original audio was produced.