Russel McLean at Murder by the Book 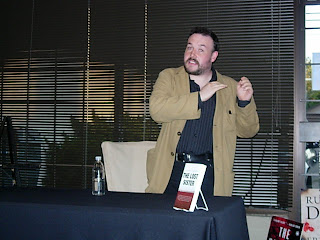 It can be a little strange when you see a black and white photograph come to life in full color, but that's what happened last night in Houston. We writers here at Do Some Damage have been doing this group blog thing for a little over a year now. We've had lots of e-mail conversations, and, yet, most of us have yet to meet face to face. Thus, the only images we have of each other are the pictures over there on the left. Had you been a fly (or mosquito) on the wall yesterday, you would have been able to see me and Russel McLean give each other the quick once-over, making sure the living, moving person in front of us was who we thought it was.

An intimate, but exuberant crowd met Russel McLean on his first trip to Murder by the Book last night. This was the second official stop on Russel's Getting Lost in America Tour after Minneapolis on Thursday. He will be in Los Angeles for the weekend before jetting out to Poisoned Pen bookstore in Arizona, and then onto Bouchercon in San Francisco later next week.

Wearing a camel-colored blazer over black pants and a black shirt, Russel told me ahead of time the book signing that he feared no one would show up. I suspect that's the greatest panic for any author on his first book tour. Late in the evening, one of the folks getting their book signed asked him if he felt weird being on the other side of the signing table. For those of y'all not in the know, Russel's day job back home is as a bookseller. The joking and snarkiness completely left him when he said, in all honesty, that it was definitely a different feeling. Well, I think it's safe to write that if word gets out about how entertaining Russel is at book events, he should start getting used to being behind the table. Actually, come to think of it, he should book two gigs per city: a bookstore and comedy clubs.

Russel's Scottish accent was a fun topic with which to start the event. He joked that he had forgotten his translation cards back in Scotland, them being too big for his suitcase. Strangely enough, when he prompted the audience for a volunteer to come up to the front and translate his speech via interpretive dance, he had no takers. I couldn't do it. I didn't have the right footwear.

Without notes of any kind, Russel talked about his current town (city?) of Dundee and how it played a major role in the creation of his first two novels, The Good Son and The Lost Sister. After the first slip of foul language, Russel apologized, citing the numerous colorful words in his novels. That started a running gag about trying to see if certain groups of people (Citizens Against Foul Language, John Travolta Fans) would get incensed enough to get up and walk out. Hey, we're Houstonians. We hear that stuff in rush hour. Don't bother us none. Actually, when it comes to crisp language in books, Russel said that he knew he'd written a good book when his mother read the novel and it upset her.

As a bookseller--that being a person who sells physical books with paper and ink--Russel had the type of reaction anyone has when first entering Murder by the Book: awe. It's a fantastic store with fantastic folks working there. And Russel's passion for books is palpable. He name-dropped numerous authors he likes and talks up back home, not the least of whom was fellow author (and current agent) Allan Guthrie. The audience last night wasn't shy so there was a lot of back and forth among us. It's one of the best things about attending book signing: we all love books and don't need to spend time talking about something. You can just hear Russel say that classic American crime fiction like Chandler and Ross MacDonald were major influences and the rest of us nod in agreement.

Bouchercon is in San Francisco next week. Having attended more than one Bouchercon, Russel said that SF called to him. He had to answer the call. In a surprise revelation last night, he let us know that another SF used to call him. Science Fiction. Crime fiction is Russel's second genre in which he's written novels. Being a SF geek myself, I asked him how he came to crime fiction from SF. He had written a Doctor Who tie-in novel (rejected) and another SF novel (rejected) before his dad passed him an Elmore Leonard novel. Once Leonard got in his veins, Russel said, he made the obvious conclusion: how about I give crime fiction a go. We readers can count our blessings that he did. 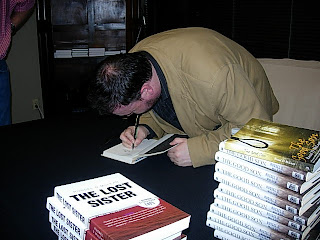 It was a thrill to meet Russel last night and to join in a full celebration of his two novels, mystery fiction, and the joy of reading. I'm already looking forward to his next book...and tour.
Posted by Scott D. Parker at 1:00 AM

He's a good man, that McLean fella. Just never ask to meet him in front of a McDonalds (it really throws him off).

That top photo, is he dancing the Cha-Cha?

Russel is a wonderful dancer.

I would totally have done the dance and I can't wait to meet Russel at Bouchercon.

So Murder By the Book is in Houston, eh? We have a store by that name in Portland too.

I know that feeling you speak of when you meet a fellow Blogger online. Matt Mayo and I did "the quick once-over" too.

Best of luck to Mr. McLean and his novel.

I concur. Very entertaining and likable guy. Be sure to keep an eye on him at Bouchercon. He has s tendency to wander off.

Love Russel.
Love his books.
Everyone should go to his events.

in the top picture Russel is demonstrating the angle that the rocket, cunningly disguised as a book, will take off at. And the plastic bagged feet is a very, very good plan.
Also don't feed him mushrooms.