Joelle Charbonneau at Murder by the Book 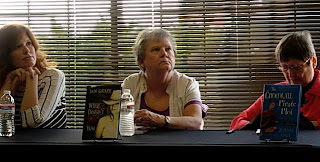 I think by now, most of us can hum the theme song to “Cheers” and, if not, at least know the sentiment of the song: you want to go somewhere where everybody knows your name. I don’t frequent bars, but I do frequent Murder by the Book and dang if it isn’t a place with people who know my name. Fellow Do Some Damage scribe Joelle Charbonneau was to have her first signing at the store and I had called ahead to reserve a copy of her book, Skating Around the Law. No sooner do I enter the door than Dean James reaches behind the counter and delivers Joelle’s book to my hands. That, my friends, is the type of service that’s few and far between in this day and age. It’s noticed and appreciated.

Joelle Charbonneau, a Chicagoan, was one of three authors at Murder by the Book last Saturday, JoAnna Carl and Jan Grape were the other two. Since I literally had just picked up Joelle’s book, I hadn’t read anything by them so I automatically felt at a loss. In addition, I tend to read the grittier material, hard-boiled fiction and noir stuff. Ironically, that kind of reading is in direct contrast to the types of mysteries I watch on television: Castle, Masterpiece Mystery [Foyle’s War; Wallander; Collision], Monk, CSI: Miami. Not exactly blood and guts, you know? I’ve been contemplating the types of books I write and this light vs. dark debate is the primary question I’m trying to answer. Needless to say, I was pretty excited about the event. 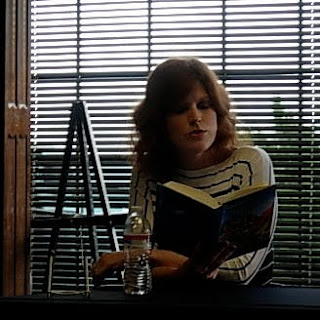 After brief introductions and biographies, the authors read their first chapters (or portions of chapters) for us. In all the author events I’ve been to, this was a first for me. JoAnna kicked it off by reading from The Chocolate Pirate Plot. Jan followed with What Doesn’t Kill You. The third member of the “J” Gang was Joelle who read most of her chapter. Here’s what struck me by all three authors was the audience reactions. There was about a dozen of us and we laughed, chuckled, or gasped at all the right places. I think it’s great, as a writer, to read aloud to other people and see if they react like you expected them to do.

Each writer talked about the inspiration of their new book. For JoAnna, this is twelfth book in her series featuring Lee McKinney. Jan demurred, saying there were too many inspirations to mention just one. I can concur with that, seeing that some of my ideas filter down from dozens of sources. Joelle’s mother is a world class rollerskater so it was natural for Joelle to write a skating book. Her agent was, according to Joelle, probably thinking of a romance novel. The only problem was that Joelle kept seeing a dead body at the end of chapter one. Thus, a mystery with some romance.

Seeing as we here at Do Some Damage just discussed our writing habits, I asked them to talk about theirs. Interestingly, all three authors don’t outline, at least in the traditional sense. They generally have an idea of whodunit and a place to start and little else. They all stressed the concept that they, the writers, were, in fact, the first reader and they wanted to just keep going. As Jan said, “You have to tell the story to yourself first, then you can fiddle with it.” Personally, I think that the fiddling is where many writers—this one included—go astray. If we can’t even garner enough interest from outline to prose, how the heck will our readers.

The entire event was just plain fun. As a buyer of Joelle’s book, I earned myself a tour T-shirt complete with tour dates on the back. Tres cool. After I finish Joelle’s book (and Russel McLean’s The Good Son that I picked up at his event a few weeks ago), I’ll be tackling Jan’s and JoAnna’s books.

I spoke with Jan a bit about her time as a bookseller in Austin. She had opened a mystery bookstore in the 1990s, and, at one point, Texas had four mystery bookstores. Jan had to shutter the doors of her shop after business dried up. Now, if I remember correctly, Murder by the Book is the only mystery bookstore left in Texas. So, people, if you have a independent bookstore near you, frequent it. Get the folks who work there to learn who you are and what you like. Then, one day, you’ll be able to walk in the store and they’ll know your name and you’ll feel right at home. You might even hear that familiar theme song...

In relation to the Cheers thing... I said it on tour a few times and I'll say it again: This is what bookshops are. They are not like any other kind of retailing (with the possible exception of a proper music store, the vast majority of which have now gone) in that they require a sense of community. The joy of books is not merely in the reading, but in the promotion of continuous conversation between readers. This is why it is okay not to like a book for solid reasons; you can then discuss those reasons with other readers who may or may not agree with you. And bookstores act as a central hub for this conversation. They are as much communnities as anything else, and we "give back" to these communities by buying our books from them. If we don't, then we lose them. Forever.

And we'll miss them if we do.

As a bookseller, it was an inspiration to me visiting these thriving independents. MBTB, Once Upon A Crime, Poisoned Pen, The Mystery Bookstore... all of them were different and yet all of them shared a common sense of passion and enthusiasm for the printed word and for the discussion and genuine promotion of books. They were all so wonderful to me as a writer and as a bookbuyer (although I didn't get the chance for a proper look around every store due to time constraints etc) and reinforced what I always believed bookselling to be about.

Anyway, that was more of a soapbox than intended. Can it make up for my missing yesterday?

Sounds like another grand event, of course, and from the sound of it all of our Joelle's events have been a blast.

I am now going to go and continue my self-imposed penance for missing this week's blog...

Scott - it was great meeting you. Murder By the Book was a great store and made me feel at home as an author - which was lovely. Although, I will make one correction in your post - an agent suggested I write a roller skating romance. She was lovely - but couldn't rep the book because it wasn't a romance. However, my agent does crime fiction which made her a wonderful fit....and thankfully she liked the book:)

I can't tell you how much I appreciated seeing you on the road. This tour I got to meet 3 DSD friends - you, Russel (at Bouchercon) and Dave (in NY). I look forward to meeting everyone in the years ahead!

Okay - back to writing. (The down side to not writing with an outline is that you have to go back and read the whole book if you take time off to do things like - oh - tour!)