Geez, Where Don't I Write

I'd been reading the "Where I Write" posts over at Murderati and digging them. I love that stuff. I love the gadgets involved -- iPods and voice recorders and laptops. The process -- outlines and storyboards taped to the wall. The mess -- always blame the pets. There's just something so real about that, you know? Especially, as with the Murderati folks, the writers are people I love to read.

So when the idea to steal their idea came up, I was excited to see where all the DoSomeDamage crew did the magic. (I had no idea Dave White composes his novels at a Pier One store, for example.)

Then I realized that I had to participate. Bugger.

Talk about hubris, right? Here's how Dave White wrote his Jackson Donne novels. You know, books you can buy. Here's how McFet's writing of his third novel differed from his first. Joelle can't take pictures of her desk because she's at a bar at two in the morning talking to Reed Friggin Farrel Coleman. You want to buy Joelle's new book? Head down to the bookstore. The only way you'll find my book in a bookstore is if I print off a copy at home and leave it at the store.

I mean, my writing about "Where I Write" is like having my Uncle Mordecai talk about the time machine he built. Which, by the by, my Aunt Gladys (the other Aunt Gladys) turned into a fantastic orchid-growing shed a couple of years after Uncle Mordecai went missing. She got two firsts and a second in a three-year span at the state fair, so it worked out pretty well.


So here's one place I write. In the front seat of my car while watching the kids practice soccer. 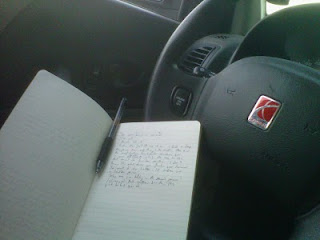 Or here, at the local Chinese food place. The other place has a nicer "atmosphere" what with the dark panels and generic Asian art of waterfalls on the walls. This place I like has more of a fast-food feel, but offers a great buffet. The other place doesn't even have white rice on their buffet. I mean, I'm low-carbing it, so I don't eat white rice. I just think it's weird. So I'll make a run through the buffet, then get some scenes down on paper as I work through some of General Tso's Chicken. 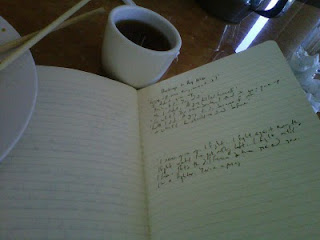 I take those notes and scenes and ideas and put them into the laptop, even if the Yankees are playing. Below, Robinson Cano just came around to score as Alex Jackson took an elbow to the temple. That's at my mother-in-law's house. 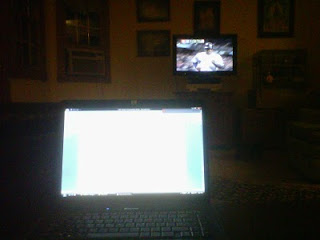 Sometimes, though, when we're at my mother-in-law's for the weekend (which happens more often in the months of September and October because everyone was born at the same time of year) I get run out of the TV room because the grown-ups finally get tired of trying to force the children outside to play and end up putting Sponge Bob on. So I have to find other accommodations. A card table and one of those keep-the-wax-from-melting-off-your-face wing-chairs, please. 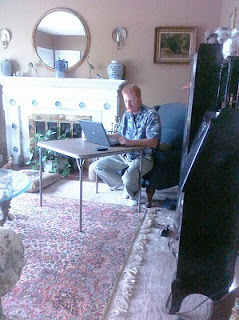 After I get the words into the laptop, I'll print out sections to read through. This next picture is me working through one of the printouts. Maybe you can see on the right-side of the paper a darker column. That's from Track Changes, which I use in Word. I didn't know about that option until World's Best Agent started using it to leave me notes in my manuscripts. ("Hey, didn't he die on page 23? Why is he back here on page 148? Is this a paranormal or were you drunk again?")
On the arm of the couch there you can see my moleskine notebook in case I need my scenes/notes/ideas and my BlackBerry in case anyone cares enough to tweet me. Oh, and I was reading that scene to Gumbo a moment before, but you could probably tell that from the look on his face. 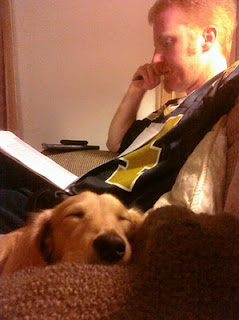 My wife took that one and suggested I use it for the post. I told her "no thanks." She asked why. I said, "Looks like I'm picking my nose or eating my pen." She said, "Sweetie, Gumbo is in the picture. No one will be looking at you." So, you know, there's that then.
Here's a couple more. This one in the basement is where I should write. We set up a table and chair in the basement, which is where we do most of our living. But I don't write here, even though I should. 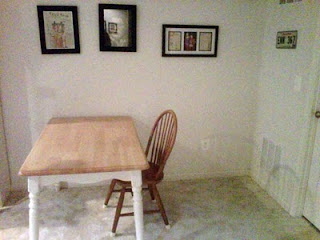 Here's where I do most of the word input -- the back room of the house, the room with the wall of windows looking up the hill, past the rock garden, past the kids' forts in the woods, up to the swingset and the soccer/drain field. 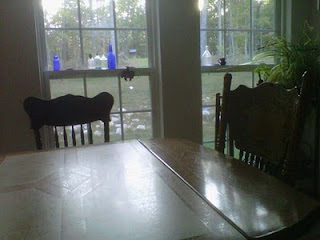 Someone said "Being a writer means you always have homework." That sounds about right. At soccer practice, lunch, birthday parties, I'm always writing something.
Thankfully, the folks who put up with my nonsense are understanding. At my mother-in-law's, for example, someone might ask where I've gone off and hidden myself.
"He's writing," someone will say.
"Well, I hope we get to read it some day."
"Oh, of course you will. He can email it to you."
---------------------------------------
I'd like to share some of your "Where I Write" pix. I already have one from John Hornor Jacobs of his new write-space. Email yours to us at dsdamage AT gmail.com and I'll be glad to post them with your write-ups next Monday.
Posted by Steve Weddle at 3:00 AM

Email ThisBlogThis!Share to TwitterShare to FacebookShare to Pinterest
Labels: Where You Write

My drollery has been overcome by my OCD and I must point out that it's 'SpongeBob' and not 'Sponge Bob', matey. Camel case is a harsh mistress.

Steve, that just made me laugh so much - actual out loud laughing. I so want to be able to go into a bookshop here and not only be able to buy your book but to buy your BOOKS. So come on....

I particularly love the car shot.....that's me but in Ardrishaig carpark, at night, in the dark - I'm always so pleased that those clever Apple people made a keyboard that lights up in the dark....it's a long wait for singing practice to finish but I always get a lot done!

Generally, I avoid 'where I write' articles. They are too often much of a muchness. But this one is hilarious.

And your wife was right about Gumbo.

Evil - Thanks. I'm not exactly an expert on that.

McDroll - that's a fancy 'puter you got there, then.

I wouldn't think you'd need to write anymore with all the change you're making with the new Orbitz price assurance commercials. :)

As for the pic, I'd have to move the dead body first.

Steve, You have some very comfortable looking places to write. I'm jealous. I'm in a hotel with some very interesting next door noises. If I only wrote hardcore...

Ha! This was hysterical. And hey - you just have to come to Bouchercon so you, too, can stay up till 2am.

David - I look forward to reading that one.

Your wife was right. I didn't notice the pen until you mentioned it.